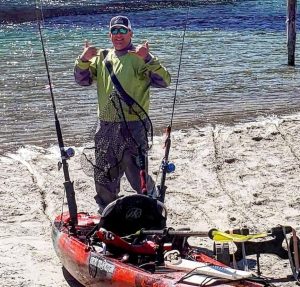 In this series, the KBF blog profiles the Tournament Director of a KBF Partner Club. The “10 questions with a TD” column features both established clubs and new clubs from across the country in order to showcase the variety of people who tirelessly devote themselves to growing our sport.

This edition features James Snyder, a Tournament Director with California’s Yak-A-Bass. His KBF Partner club will host a KBF Trail Event on July 25th on Lake McClure in Snelling, California as part of the KBF West Trail region.

Register here for the KBF Trail at lake McClure: https://tourneyx.com/app/tourney/20-07-kbf-trail-lake-mcclure-west-region

I’ve been fishing since I was in diapers, I found kayak fishing 8 or 9 years ago while researching how to get off the bank and get into a semi inexpensive alternative to a boat. I was lucky enough to have a kayak shop open just down the street from me. While looking around I came across a Mad River kayak canoe hybrid and jumped on it during a sidewalk sale. I’ve been floating and fishing ever since then.

Yak-A-Bass started 5-6 years ago after a failed attempt from another organizer tried to run a kayak series the same as a boat circuit and as the looking into the best interests of the kayaking community. We started small with 4 members who ran the club and about 10 members. We have blossomed into the largest kayak fishing series on the West Coast boosting numbers on average of 100 or more kayak anglers fishing at a in person event with more then 250 members state wide. We fish the Northern California area from lake McClure up to Clear lake and everything in between. Our community is different from others in the kayak community. Our tournaments are very much about catching fish and being competitive but the best part is the camping, hanging out with like minded anglers and our families and helping each other out. There are groups within the group that hang out fish and camp together not just during tournaments but year round. But anyone is welcome to come into camp grab a bite to eat and a nice refreshing adult beverage and enjoy some dock talk.

I take up most of the burden of running the series. I do have a very tight team of 3 anglers/organizers that help with social media, judging and keeping me on track. I get some crazy ideas and it’s great to have a team to bounce ideas off of even though sometimes I don’t listen- I’m definitely getting better at asking for help. Holly Baumbach is our amazing judge and basically the series mom. She’s an amazing person who will tell you how it really is and keeps me in my place. Without her we would be in a world of hurt. Adam Baumbach is our social media guru. He’s runs our Instagram an helps to monitor the group and always has his eyes and ears out trying to help keep things moving in the right direction and definitely doesn’t get the credit he deserves. mike Ayers in my second in command. He’s taken a slightly less role this year enjoying his family and his amazing new backyard but he’s always there when we need him. From setting up and hanging out at the lake from sun up to sun down and helping to pick up after the groups fishing tournaments. Again without his help none of this would be possible.

We have a very diverse crowd. I would say 20% of the anglers are your super competitive anglers who put in a lot of work and it shows in the AOTA standings, 60 % of the anglers are out to have a fun time seeing their friends and enjoy fishing from there kayak and would love to cash a check and the last 20% are new anglers or our junior anglers who are trying to learn the ropes have fun and increase their skills and find out where they fit in with the large group of anglers. Our anglers have come to expect a very fun event in which we play no favorites. We draw the line in the sand and do our best to have no grey areas. We are very upfront and try to include our members in all major and minor changes that happen with the series. Every year it gets better and we’re moving into the direction that everyone is happy about. It was pretty rocky during our first few years.

We are very lucky to have a pretty large social media following, we don’t have a website we operate all through Facebook and Instagram. We are lucky enough to have some very well known and respected You tubers who bring in a lot of new anglers just by letting us live through there videos. These guys help us grow more then they will ever know. We regularly see new anglers entering into the sport due to watching there YouTube videos and trying to meet their kayak angling YouTube heroes.

We are one of two KBF Qualifying series in California. So-cal kayak anglers is our brothers from the south that also host KBF events in the San Diego area so we are covered from the Oregon border down to Mexico and regularly have anglers make the drive to fish both series from all over California and neighboring states.

Kayak fishing has exploded in recent years, with the mass production of pedal drives allowing anglers to cover more water and then allowing trolling motors we have seen the biggest increase from boaters making the switch to fish a new style and master kayak fishing as they were bored of fishing boat tournaments and the drama that may be included in that. Not that kayak fishing doesn’t have its own drama but in recent years it’s definitely slowed down and for the most part out here most are getting along and wanting to help spread the love of kayak fishing with any and everyone possible.

Personally I can see kayak fishing breaking off into two separate avenues in the future- one would be moving towards a true pro tour. The west coast is left out on a lot of the pro style events with very little exposure. So with that we have to constantly review and make changes to give anglers that competitive edge that the east coast has with so many extra events. The other would be more grass roots style series popping up. This will allow more anglers to fish more events at a less expensive hobby and allow anglers to grow their skills to compete in the larger events or larger series. We at Yak-A-Bass try to have the best of both worlds. We keep entry fees fairly low at $50 which still allows great payouts but also offer multiple side pots to increase those payouts for those who like a little more skin in the line. We off a $20 big fish side pot, a Yak-Pot basically a high dollar side pot that is split 50/30/20 between the top 3 anglers who buy in. These tend to pay out as much or more than the normal tournament entry fees. We also a $5 small limit side pot which whom ever has the smallest 5 fish limit walks away with the winnings and a very fun $5 skunk pot. This is a random number generator for all anglers who buy in and don’t catch a fish, it is usually enough to pay for your entry, camping and travel and maybe a 12 pack of your favorite adult beverage.

California fishing is crazy, we have lakes that are shallow like back east to lakes that are more then 400 feet deep, we also have one of the most diverse river fishing systems in the world. On any lake or river a 10 lb Bass could be sitting on any give point, wood or rock pile and under a floating vegetation mat. We have most species of fish out here but lucky enough not to have any of the toothy critters like anglers have back East. We are lucky to be able to fish some of the most beautiful lakes and rivers in the us and lucky enough to have the #1 ranked bass lake in the US! From the Central Valley here in California I am 3 hours from fishing any style of fishing you could ever want from our eastern Sierra lakes for trout and lake trout to our amazing bass fisheries to the ocean for rock and king cod and salmon in the salt water and also in our delta river system. You could fish every day for a year and never see all the water in a 3 hour circle around your house.

McClure is lowering [its] water, so all your pre-fishing ideas are no longer viable, it’s going to be hot so bring way more cold water…. You think you’ll need and pay attention to cell phone reception. We’ve had reports of many anglers having to drive 10-20 miles from there launch to get cell reception to submit fish, so plan accordingly!

About the author — Henry Veggian is the KBF Mid-Atlantic Regional Coordinator and is on both the Jackson Fishing Team and Ketch Outdoors Team. He runs the “10 Questions” blog series and solicits/edits other articles for KBF’s blog. If you have an article idea, write him a pitch and send it in messenger on FB.