KBF wrapped up the 2018 Season with not one, but two Championships, both on Toledo Bend, and hosted by Louisiana Travel, Toledo Bend Lake Country and Sabine Parish, State of Louisiana. For two years straight, this was Bassmaster’s #1 big bass lake. It’s fairly close to the middle of the country and far enough south for comfortable end-of-october fishing, The two Champions will take places alongside KBF Angler of the Year and KBF National Champion to compete in all future Hall of Champion Events. 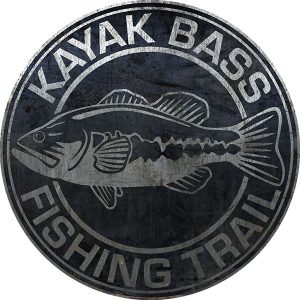 What: Top-ranked KBF Members from forty 2018 KBF TRAIL Series Tournaments across the US will meet on Toledo Bend Reservoir to compete for the title of 2018 KBF TRAIL Champion. This will be a concentration of KBF’s elite anglers—ones who excelled at individual TRAIL tournaments or consistently ranked in the top 20%. We predict the field to be about 300.

How: There are two paths to qualification.

Where: Toledo Bend Reservoir on the Sabine River, with HQ at Cypress Bend Park, Many, LA

Entry Fee: $100 per competitor. $7.50 from each TRAIL Entry Fee throughout the season goes to into the prize pot, too. Sponsors may also contribute to the prize pot.

Payouts: Full amount and number of places paying will be determined by registrations, sponsorship contributions, and participation levels in 2018 KBF TRAIL Series Tournaments, but first place will be guaranteed $5,000, plus a $15,000 bonus If he/she is enrolled in KBF BONUS BUCKS. 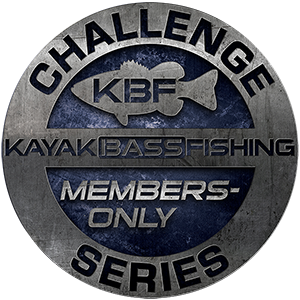 What: Based entirely on Angler of the Year Points earned in 2018 KBF National and State Challenges from April through September, this event will be held concurrently with the 2018 KBF TRAIL Championship and will determine the 2018 Challenge Champion. Only 100 KBF Members will compete (hence the title “100 Challenge Championship”). Click the “Roster” image here to open a PDF file showing the names and states of KBF Members on the roster as of 10/8/2018.

How: There are three ways to be invited to compete in the 100 Challenge Championship.

Entry Fee: None. $3 from each Challenge throughout the season goes to cover entry fees for this event.

Payouts: First place is guaranteed $10,000. Other amounts and the number of places paid out will be determined by sponsorship contributions and participation levels in 2018 Challenges.

Adam Riser (TN) put 156.75″ on the Lowrance Leader Board over two days, leaving him in sixth place for both events and $2,400 richer.
Home-state favorite Jamie Broad (LA) garnered a respectable $2,100 for his ten bass totaling 155.00 inches. He was in seventh place in both tournaments.

Garrett Morgan from Arkansas posted 152.50″ in this two-day fish-off; good enough for eighth place in both TRAIL and Challenge Championships. The payouts for those were $1,200 and $600, respectively.

Justin Coon of Springfield, Missouri fished the TRAIL Series Championship only, winning $1,100 for ninth place. He had 151.25″ as his event score.

Bouncing back after a disappointing first day, Zach Gibbons of Minnesota, in which one fish left him in 74th place, five fish anchored by a 25.25-inch behemoth bass put him in sixth place for Day 2 (35th overall). His big bass won hourly, daily, and event honors, paying off $1,050.

KBF is indebted to hosts Louisiana Travel, Sabine River Authority, State of Louisiana, and Toledo Bend Lake Country for their hospitality and support. This is an amazing fishery!

Next year’s KBF 100 Challenge Championship and KBF TRAIL Series National Championship (following five regional finals) will be on the Mississippi River system out of LaCrosse, Wisconsin.

Many thanks to KBF TRAIL Sponsor NuCanoe for supporting the 2018 series and Championship. Torqeedo Kayak Fishing was our major sponsor this year across all series and events, and KBF owes them a special vote of thanks for their support of this community and its mission. Other sponsors providing product prizes for Championship competitors were YETI, YakAttack, Nite Ize, NRS Fishing, Anchor Wizard and Gary Yamamoto Custom Baits.

This event witnessed the all-too-soon passing of beloved KBF Member Rebecca Golden, who was prepping for one of kayak bass fishing’s top competitions, checking an area that she hoped might lead to national titles, when her life was cut short. Left behind were scores of saddened, shocked, and disheartened comrades, their grief tempered by memories of Rebecca’s indomitable spirit, passion for the sport, joy and optimism. She is greatly missed. Rest in peace, Rebecca. 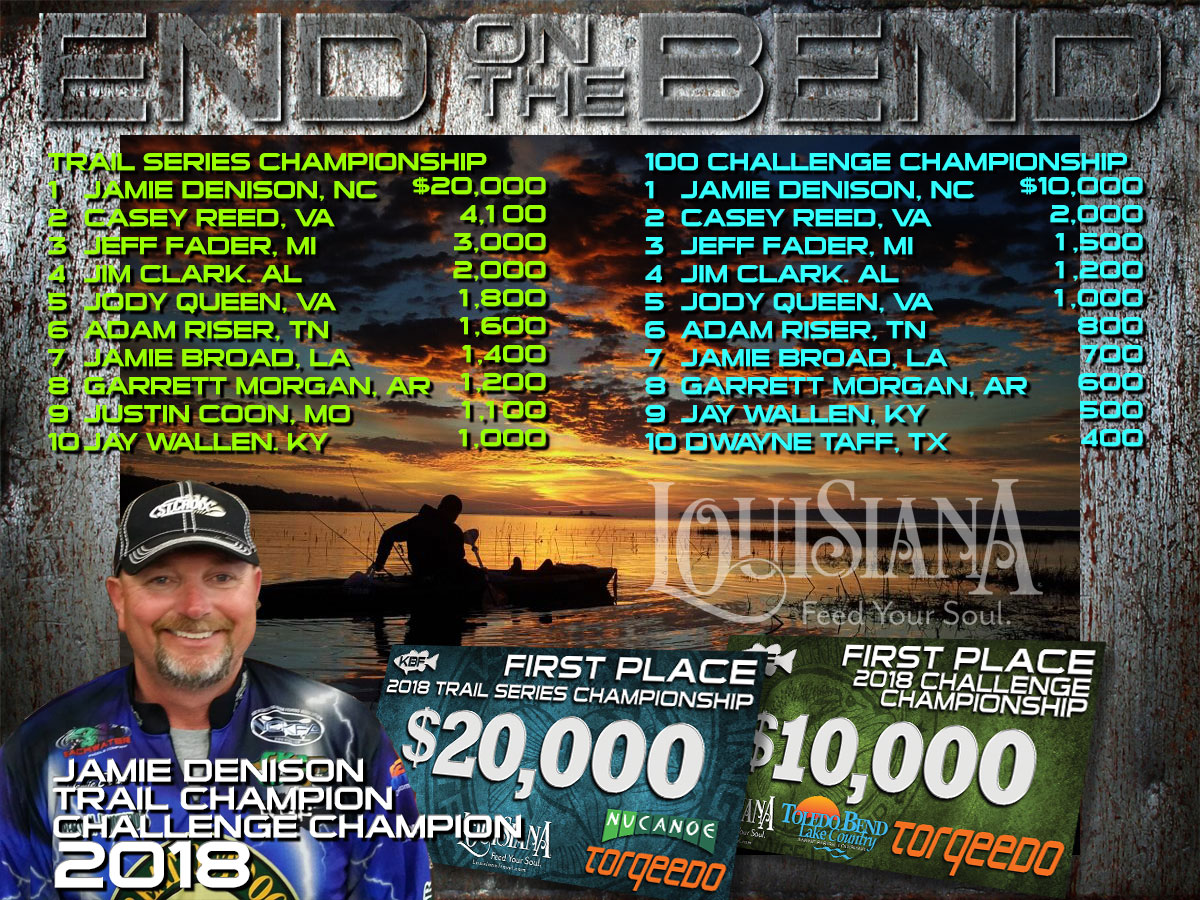 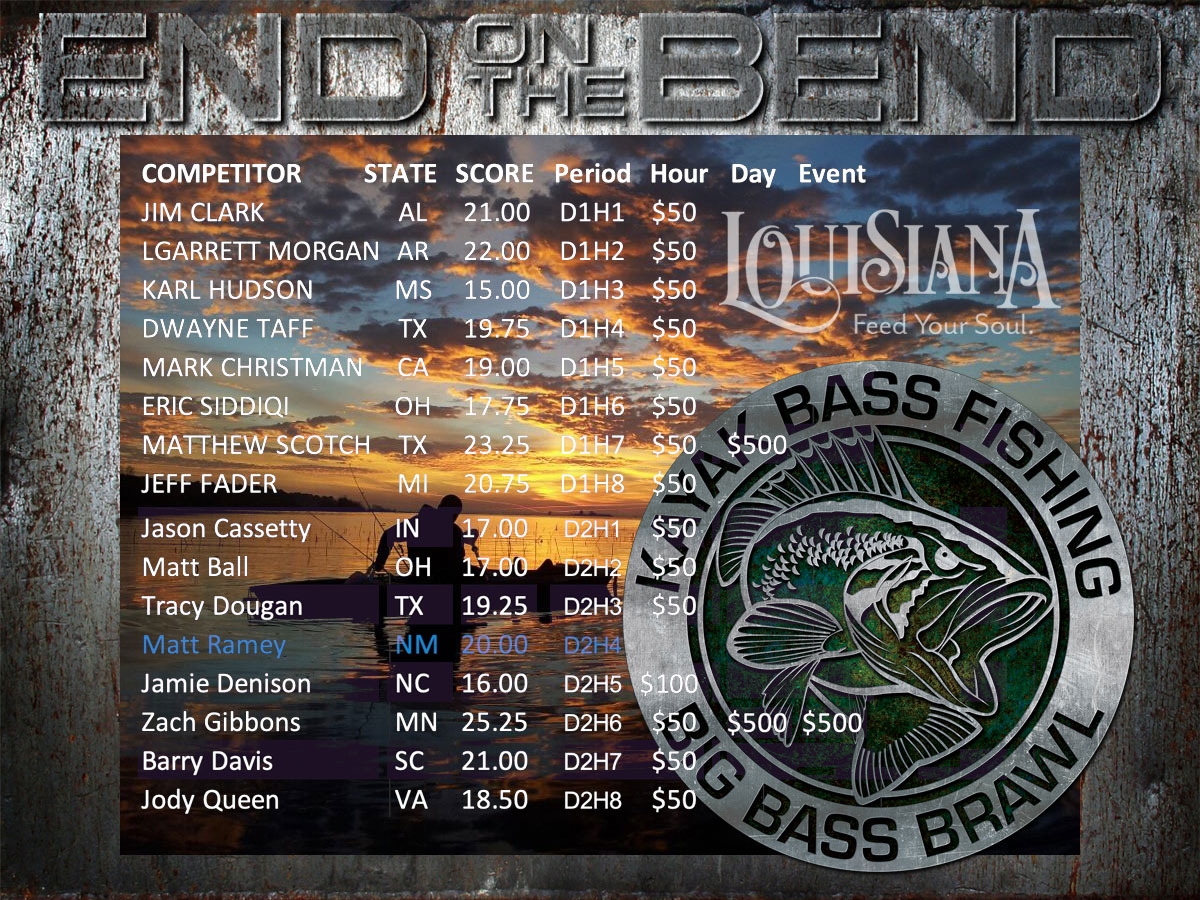