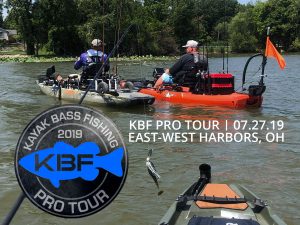 2017 KBF National Champion Kurt Smits returned to East-West Harbor in his home state of Ohio to defend his 2018 KBF TRAIL first place title. He finished Third there the year before and knows those waters pretty well. Despite having a home-court advantage, he took nothing for granted but put in three days of prefishing in both harbors.

Each practice day, Kurt was able to pull multiple 90-inch limits out of several holes. This is a very popular fishing destination with tournaments every week, so the “gimme” spots get pounded pretty regularly. To counter that, Kurt and his prefishing buddies scouted out areas less trampled—those out away from obvious fish-holding structure and cover, like cuts through eel grass patches 50-60 yards off shore, secondary grass lines, or isolated, sparse patches of eel grass. Friday night, he finalized his T-day game plan, hoping that the hot bite he’d encountered would carry on the next morning. Of course, it didn’t.

Besides the 132-kayak field in the KBF TRAIL Series Event, a 60-motorboat  tourney launched in the pre-dawn light. Several of them headed out to Lake Erie, but brisk winds drove them back into the relatively sheltered harbors by mid-day. In a roughly three square mile area, that’s a lot of boats, but anglers gave each other plenty of space, Kurt reported.

What he found on Saturday was that the bass had moved deep into cover, and they seemed to be ambushing rather than chasing bait. His aggressive bite of the previous three days had disappeared.

Experience on these waters helps a lot. Knowing that the baitfish are small in the harbors, Kurt went with smaller swimbaits and finesse presentations, like a big TRD or 4” tube. As soon as sun gets up, bass hunkered down deep in the grass. In order get his offerings to the base of the grass growing up through 6-10’ of water, he Texas-rigged his lures, rendering them completely weedless. He coupled the 4” tubes with a 3/0 offset, wide-gap hook with a quarter-ounce tungsten bullet weight. He didn’t peg his weight, as many others do there, since he uses a lot of floating Z-Man ElaZtech baits. With the weight is on the bottom, a little slack allows the bait to rise up a few inches off the bottom, where every twitch of the rod tip imparts lifelike action. Sometimes Kurt would leave the lure in one place six or seven minutes before it finally got nailed or he picked up and tried another spot. All his fish on Tournament Day came on this minimum-motion presentation, every bite slow and soft.

After he’d caught a bass or two out of an area, he figured he’d better move to another ambush point rather than sitting tight and waiting for an area to replenish.

And move he did. On Saturday Kurt launched at three different ramps and fished four main areas, catching one small 14.50” around 9:00. He pulled up on his fourth spot around 11 a.m. and quickly caught four more keepers, but then his bite dried up and he wasn’t able to discover another productive pattern. Regardless, his pre-noon run and strategy paid off for him. Kurt ended the day ranked Seventh in the TRAIL Series Tournament and took First Place in the concurrent KBF Pro Tour Tournament.

Pro Tour Second Place finisher Ken Wood of Massachusetts approached the East-West Harbors Tournament from a different angle. Ken, with fellow New Englanders Rob Harnish (MA) and Jason Gardner (ME), had 14 hours on their drive to Lakeside Marblehead, Ohio to study Google maps and fishing reports. None of them had ever seen or fished the area.

Based on their research, they decided to focus on the extreme west end of West Harbor, launching Thursday from a ramp so new it didn’t appear on Google Earth. Ken’s best five the first day of prefishing went about 85 inches, and Rob had five fish that went 75.00. Friday’s prefishing on East Harbor was fairly encouraging; about twenty bass, but not much size. The area looked good, but the quality of fish they found there didn’t entice them back.

On tournament day, Ken, Jason and Rob returned to the west end of West Harbor. The ramp was crowded, with about 20 kayak anglers filling the parking area, but they quickly spread out to fish. Ken began right beside the ramp, targeting huge lily pads along the rocky shore and riprap banks. He spent some unproductive time probing the pads off-shore but mainly stuck to combing the shallows.

Spinnerbaits, jigs and worms were getting hung up in the grass and muck to which Ken was casting, so he relied on reaction strikes with a Z-Man Project Z Chatterbait (a bladed swim jig with trailer) to put his fish in the boat. With so many KBF competitors roaming the banks, anglers found themselves fishing picked-over water. Ken followed behind anglers fishing top-water lures, and his sub-surface presentation picked up fish they missed.

Jason Gardner, who finished in Ninth Place in the KBF TRAIL Series event, was catching his fish in the same general area and conditions on a Z-man Chatterbait® Jackhammer™ with paddle-tail swimbait trailer.