The final KBF Redfish Challenge in October left a dozen top competitors within reach of the KBF Redfish Angler of the Year title. Between then at the December 7 Championship, they used Google Earth and made road trips to scout redfish activity in marshes, bays, waterways and estuaries within 50 miles of Flagler Beaches and Palm Coast, Florida.

South Carolina competitors and fishing buddies Dolphin Hamilton and Dave Jaskiewicz prefished the southern reaches of eligible water in mid-November and didn’t find the right conditions. Mud flats in the Flagler Beaches area held upper-slot-length fish; however, when Dave checked the area again on Thursday before the tournament, all the redfish he caught were over the slot. Lots of fun, but no help in competition.

After studying maps and Navionics some more, he spied an area farther north, in the Intercontinental Waterway below Saint Augustine, that promised a lot of different water and a variety of targets.

Dave prefers sight-fishing for redfish, usually relying on soft plastic Z-Man baits and an Eye Stryke Jig, so large mud flats and oyster mounds were among the features drawing him to the area. It also had some deep creeks, docks, hard shell bottom grass banks and narrow, deep-water channels. All those areas were likely to hold redfish.

During the KBF Redfish OPEN on Friday, the air was calm, the water flat, and most of the fish Dave put on the Leader Board were caught by sight-casting a Texas Eye jig with a Z-man Diezel Minnow on the flats or in creeks. He was able to stand comfortably in his Hobie PA, and his Hobie Polarized sunglasses cut through the surface glare, enabling him to choose the fish he wanted and to position his lure for a bite.

On Championship Saturday, the winds picked up. His Friday fish were still present, but a chop on the water made sight-fishing impractical. He switched to blind-casting Eye Stryke Trout Eye jig with a Z-man Swimmin’ Trout Trick along grass lines and oyster beds. Gradually he zeroed in on an area that he thought offered the best chances for quality fish. Turns out he was right.

Ten minutes later, he added 21.75” to the NRS Leader Board. His next cast added another 20.25”. After that flurry, he hit a lull in the action. The redfish were there, and smaller ones continued to eat his jig, but bigger fish were getting harder to goad into biting. In Dave’s mind, his chances for a Championship win and AOY title came down to being patient and fishing smart and hard right up until the final bell.

About five hours passed before Dave finally put two more fish on the board that cinched the 2019 KBF Redfish Angler of the Year title for him. Increasingly strong gusts and wind-stirred water led him to swap his jigs for a spinnerbait. A 22.75” redfish took the bait at 2:00. It was followed by his biggest fish of the day, 23.25”, only 15 minutes before lines-out. Those fish culled his smallest two and gave him the winning margin in the KBF Redfish AOY race.

Dave claimed that the most critical factor in how effectively he was able to pre-fish and perform in competition was covering a lot of water in order to get a better picture on the pattern that day, piecing together his observations to assemble a clear picture of where the fish were and what it was take to catch them. He was delighted with the new kick-up fins on his Hobie PA, saying, “This was the most important piece of equipment I had in this event. Covering unknown water with a lot of submerged oysters would have been a nightmare without them!”

Join us in congratulating Dave Jaskiewicz, KBF’s first Redfish Angler of the Year. He put in the preparation, explored options, and pieced together the patterns that put fish in the boat at critical times, and he made the adjustments that it took to end up the year with more points than every other angler in the KBF Redfish Challenge Series.

Only fIve points separated AOY from 2nd Place, and another from 3rd in the AOY race. Roy Ramirez, who won the Gulf Division AOY, had 2,980 points compared to Jaskiewicz’s 2,985. Andrew Imes (Atlantic Division AOY) ended the season with 2,975 AOY Points. For the full 2019 Redfish AOY points standings, go to the KBF Rosters and Rankings Page. 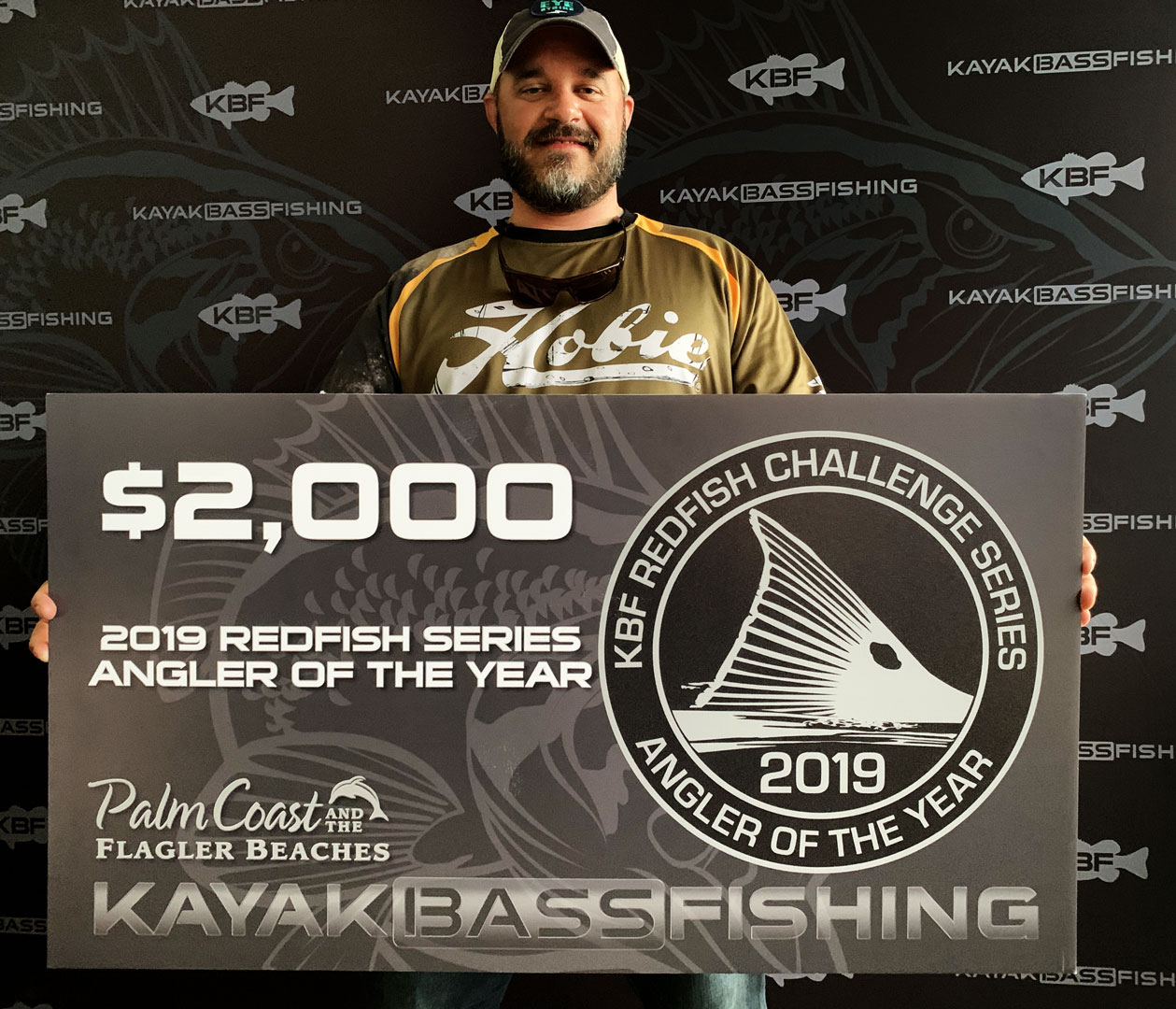 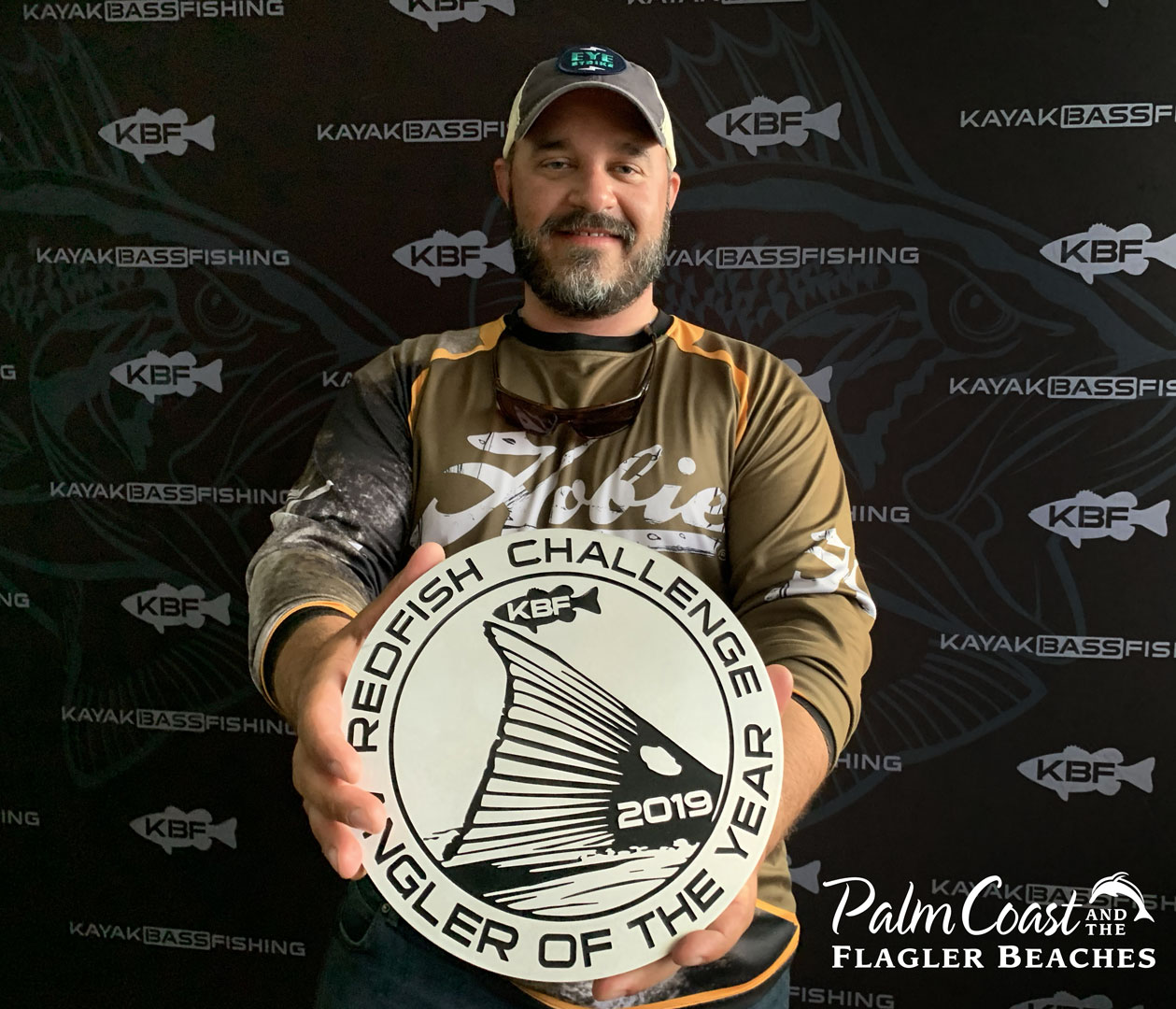