Paulo DeMorais Jr was hanging onto a 2-inch lead when the NRS Leader Board went dark a couple hours before end-of-competition at the Dakota Lithium KBF TRAIL Series Tournament on Lake Winnipesaukee. Would that two-inch margin hold up on this lake, with its reputation for large numbers of bass in competition? The lake sees 5,000 pleasure and bass boats per day in the summer. It’s heavily-pressured, too. Last Saturday, three bass boat tournaments were being conducted there in addition to the KBF event. Boat traffic plus wind made it a veritable wave pool, with 6-7 foot swells at times. Only half of the 85 KBF TRAIL competitors had uploaded photos by 2 p.m.; were they sand-bagging? By the time Tournament Coordinators Ken Wood, Shawn Roche and Jason Gardner announced the results, the hands that hoisted Paulo’s TRAIL Series First Place Plaque had nails nibbled down to the nubs.

Gabriel Portes, his Massachusetts fishing buddy, finished in 8th place with 74.75 inches. It was Gabriel whom Paulo credits for discovering the pattern that put his winning bass in the boat. While prefishing on Thursday at Meredith Town docks, in the extreme NW area of the lake, Paulo caught good numbers of bass on under-spins and drop shot baits, the best five of which would have run 75 inches.

On Friday the partners went to Shep Brown’s Boat Basin where they met up with Ken Wood and several other Massachusetts KBF Members. Five hours spent probing weed beds there produced only one rock bass, so Gabriel and Paulo drove to Ambrose Marina Cove at 11:00. Since that’s not a public launch, they put in at State Landing just a short distance to the northwest. The bite remained slow and sporadic until late afternoon, when Gabriel ignited a feeding frenzy using a green pumpkin Chatterbait. That color worked for Paulo as well, and it firmed up their competition day game plan.

Deep and rocky, Winnipesaukee is quite different from the shallow, weedy lakes Paulo has back home in Massachusetts. Saturday morning found him fishing mid-lake humps or rock piles with his green pumpkin Chatterbait. That turned out to be one key to his victory. The second was Paulo’s Power-Pole, which he rammed down into cracks between boulders near the center of the humps. High winds and boat traffic thumped his kayak all day, knocking him around and slamming the Power-Pole into the rocks with an awful racket, but it enabled him to remain in place and cast multiple times, combing the water in all 360 degrees. One hump gave up 4 keepers and he limited out on another just before noon. He struggled after that, unable to upgrade his score. In all, Paulo caught only 10 black bass all day. Gabriel lost a 4-pound heartbreaker that threw the hook before he could get a net under it. Paulo, though, was able to net all the fish he hooked.

Not far away, near Lee’s Mill Boat Ramp, Aaron Smith was exploring Green’s Basin. Finding fish of the right species was a challenge; the lake is loaded with rock bass. Concentrating on long, tapering underwater points, with surface temperatures 77-78 degrees at 8:30AM, Aaron relied on his trolling motor to keep his Predator in position to cast to steep drop-offs. Bluegills were there in abundance, and Aaron matched them with a chartreuse and white Z-man Chatterbait with a Rage Tail Swimmer, the tail of which he’d dipped in chartreuse dye. Sitting in 4-5 feet of water and casting out into 13-foot depths, Aaron realized a fish had taken his lure on the drop when it failed to hit bottom after ten seconds or so. He knew, upon setting the hook, that the fish was huge. Suffering from “big bass jitters,” he dropped his landing net in the lake and then retrieved it while playing the fish before finally boating a 20-inch largemouth that was not only the biggest bass of the hour but of the day, earning Aaron a KBF Big Bass Brawl check for $550.

Kris Ellis’ plan for the day was to hit Melvin Village weed bed just a few minutes from his launch point—one he’d scouted out earlier. When he approached the buoy marker, a bass boat was already there. While he waited for 7 a.m. to roll around, he watched the two anglers on that boat cast and retrieve without a bite. Another bassboat and a few other TRAIL competitors pulled in on the spot about the time for TRAIL competition to start.

For a while the water remained calm enough for Kris to employ in his favorite tactic—top-waters. Baitfish were surfacing all around him, popping above weed beds in 6-12 foot depths. His first bass—the 18.25” Golden Hour winner—fell for a Monkey Butt-pattern Whopper Plopper 110.

The wind and boat traffic picked up, and so did Kris, motoring from one weed bed to another within a 20-acre area. As the sun rose and wind intensified, he switched to a Ned Rig with 3-inch TRD and then to a wacky-rigged Green pumpkin black flake Yum-Dinger on a weighted Z-man Ned Rig hook. Switching lures was the other key his Second-Place finish. When he lost his weighted hook—the only one on his boat—he improvised by tying on a Gamakatsu 2/0 hook with a 1/16th ounce pegged slip sinker. Wacky-rigging with that combination produced 16 fish, the best four of which filled out his 79.00” limit.

Kris was impressed by the Bonafide SS127’s stability, easily handling six hours of pounding by treacherous winds gusting to 30 mph and waves that washed over his gunwales. He never stopped fishing, even during squalls that swept over the lake. A 30-lb Minn Kota trolling motor he’d mounted to a homemade transom bracket enabled him to stay on the weed beds he’d found earlier in the week. He could have taken shelter in nearby coves but decided to tough it out. Under those conditions, an 8-pound mushroom anchor proved invaluable.

Kris’ buddy, Dave Ficek, who finished in 10th place, also put in at Lee’s Mill but set up in sheltered water out of the wind. Dave focused on little areas with cabbage over 12-15’ water or docks around 20’ of water. He started out dragging a coffee-colored tube in shallow water but, figuring the bass were holding in cooler, deeper water, he soon changed tactics, ripping a Ned Rig through the cabbage. His presentation was pretty basic: cast and drag back, popping it free from weeds, almost like fishing a jig, but with a floating ElaZtech lure.

Taking Third Place in his KBF TRAIL Series debut was Greg Matakaetis of Connecticut. Greg had fished only KBF State and Regional Challenges up to this point and welcomed the opportunity to match names to faces and pit himself against some of the top KBF anglers from across the region. He was favorably impressed the friendliness and camaraderie he experienced among the other competitors.

Greg, Derek Brundle (who finished in 4th Place) and Rob Pagnano (32nd) stayed at Long Bridge campground and on Tournament Day put in at a nearby public launch. Greg’s strategy went against the grain; like Kris, Greg elected to battle the elements in open water, taking the full brunt of 15 mph wind and waves. As it turned out, the wind worked to his advantage. Greg pedaled his Old Town Topwater 106 kayak upwind the grassy, 5-foot-deep rock piles he’d marked while prefishing on Thursday when the water was calm. Pointing his prow into the wind, he pedaled just fast enough to hold his position, allowing him 5-10 casts into each area before drifting back downwind to his next spot. Although the chop and waves prevented him from seeing his targets clearly, on each pass through the football field-sized area he’d chosen, he picked up another fish. Every one of them came on a half-ounce drop-shot rig baited with a Beastcoast Magic Flick that resembled smelt on an Owner dropshot hook.

This past weekend wasn’t Ken Wood’s first look at Winnipesaukee; he’d fished three tournaments there: a KBF TRAIL Series Tournament two years back and two bass boat tournaments. In reviewing those events’ standings, he noticed that the fish generally ran to the small side and predicted, correctly, that a limit of 16-inch bass would put one in good shape. Unfortunately for him, Ken wasn’t the competitor with a 16-inch average limit. In the concurrent KBF Pro Tour tournament, he managed to put only three bass on the NRS Leader Board totaling 42.50 inches. Not what he’d hoped for, but enough for the “W.” John DiCenzo (RI) took Second Place with 42.00 inches, and in Third was James Engle (ME) with two bass that combined for 30.75 inches.

Ken zeroed in on rocky humps where the bottom rose abruptly from 20 up to 3 feet, piling up dangerous waves as they ran up onto the shallows and testing his boat positioning skill. His fish came on a Z-man TRD Bugz—a floating ElaZteck creature bait resembling the Sweet Beaver. He fished the bottom, feeding the lure down rocky drops along a channel where he had to contend with constant boat traffic. All day Ken caught only eight or nine black bass. Three smallmouth threw the hook before he could net them. Most times he set the hook it was on rock bass—aggressive little fish about the size of bluegill.

The Top 10 from this KBF TRAIL Series Tournament qualify for:

Congratulations, and we hope to see you at one or more of those regional and national level competitions.

Many thanks to Dakota Lithium for its support of kayak fishing across the Northeast region and to KBF’s other sponsors whose backing makes these events possible. A special tip of the hat to KBF Volunteer Event Coordinators Ken Wood (Massachusetts Kayak Bassin’), Jason Gardner (Maine Yak Anglers) and Shawn Roche (Granite State Kayak Anglers) for organizing, planning, and running this event—by all accounts one of the best in the country this year. Also, kudos to KBF Members from the anglers from twelve states who converged on Winnipesaukee for this KBF TRAIL Series Tournament and to the Pro Tour anglers who competed there as well.

†KBF will be comping 2020 KBF Pro Membership dues for all 2019 KBF Pro Tour registrants; to thank them for jumping into this new venture and for helping to take kayak bass fishing to whole new level. Their support and participation was, in large measure, instrumental in enticing FLW to partner with KBF for professional-level kayak competition. 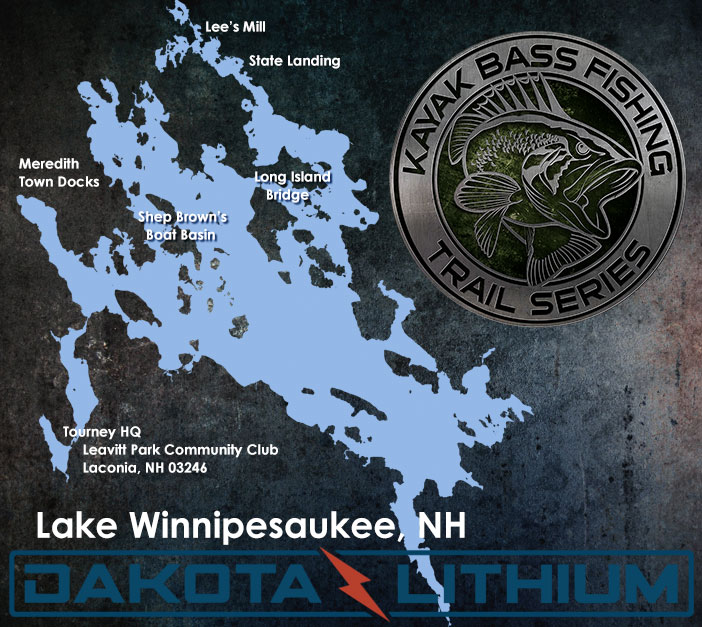 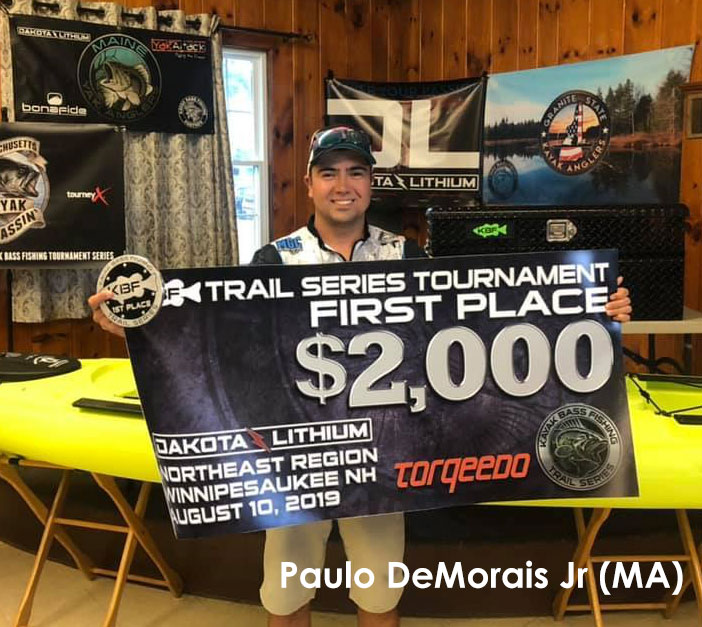 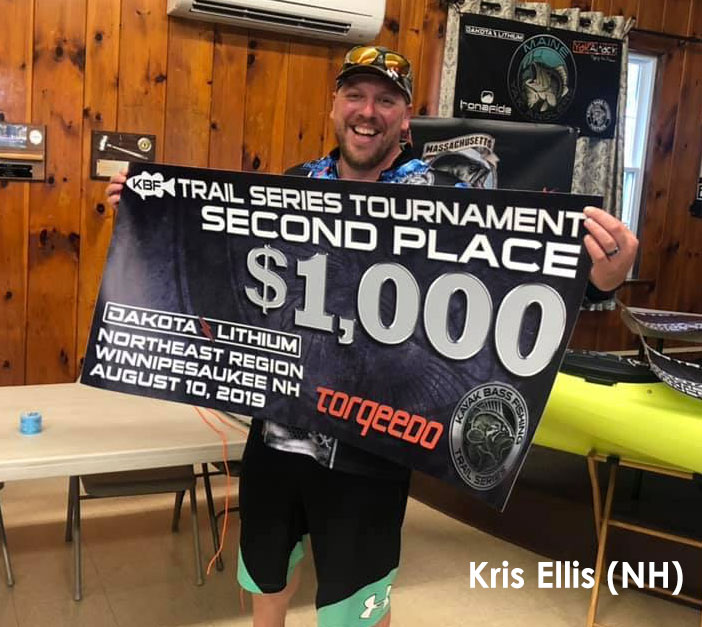 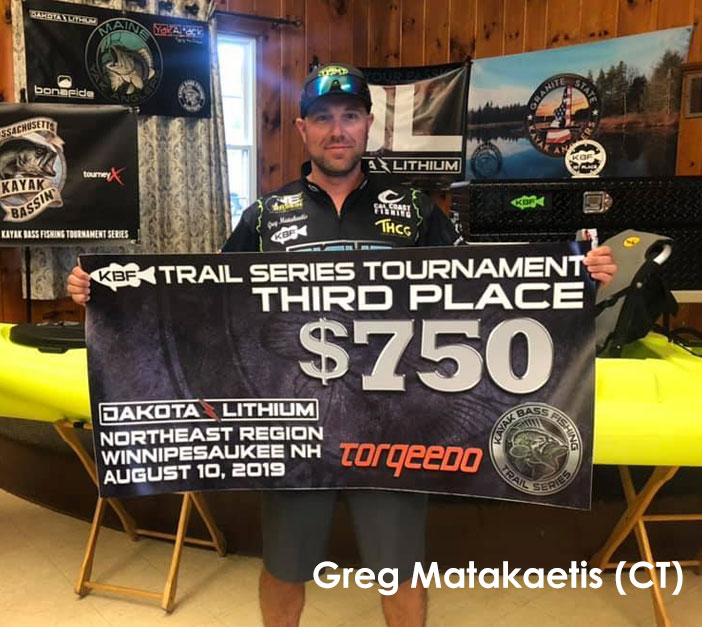 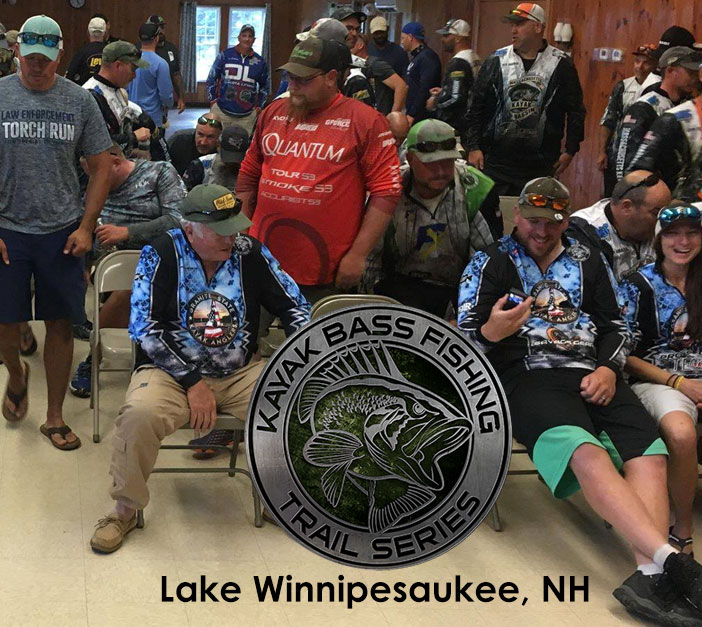