As sailors know, it’s a bad omen when you cross the Flying Dutchman’s sails at sea. Kayak anglers might be thinking the same thing when they see Rus Snyders on the water during a tournament, because no other angler has dominated our sport like he has over the past two years. We’re all paddling in his wake of late.

A run down of his major victories is in order to emphasize his achievements. Since 2019, Snyders has won

That’s 10 major victories on the national circuit in the span of two seasons (he won 2 KBF Trail events on back-to-back days at Kentucky Lake). Additionally, he had a 4th place finish at the 2020 Kayak Bass Fishing National Championship presented by Torqeedo  and he placed 3rd in the 2020 KBF Trail Series Championship.

Along the way, Snyders has collected a gallery of trophies, traveled tens of thousands of miles and taken all of our lunch money at least once. The Flying Dutchman – it’s a modern story about a ghost ship; it’s also fitting to describe one of the best kayak anglers in our modern sport, and one who, like the great Rip Van Winkle before him, is an American angler of Dutch descent.

I caught up with Snyders heading into the next edition of DEE ZEE KBF The TEN, which will be held on the Kissimmee Chain in Kissimmee, Florida on February 2-3, 2021. He will be defending his title there and launching his 2021 season on the Realtree Fishing KBF Trail Series presented by Dee Zee.

H: I’m going to start with some personal questions, if you don’t mind. The great biographical section about you in a recent issue (Winter 2020-21) of Bass Angler Magazine noted that you are of Dutch descent. I have to ask, being you are an angler who loves fishing rivers and creeks, if you have ever visited Holland and fished its canals. Have you?

Snyders: I visited Holland once when I was 18. I was with my family and traveled there for a soccer tournament. I’ve never fished there before, but my father told me stories of him fishing with his grandfather in the canals when he was a little kid.

H: Another travel related question: you have won events from California to Florida. Since you began your epic run of tournament victories in 2019, how many miles have you logged on your truck?

Snyders: I have a little over 400k on my truck. Last year I put on about 30k. I’m doing maintenance now in my down time.

H: For anglers new to the sport of kayak fishing, explain how they might prepare for the travel and the role sponsors play in supporting you in competition.

Snyders: I’ve always been a person who likes to prepare for any situation. I carry a big arsenal of iRods, and a good amount of tackle. Most times I go into tournaments as open minded as possible, and try to fish as many areas and techniques as I can. Lodging is another large part of the preparation process. Most time a few friends and I will go in on a house together (Airbnb or VRBO), especially if it’s 3 nights or longer. If it’s just a night or two we may just get a motel instead.

If I’m adventuring solo, I’ll usually just crash out in my truck. I took out all my seats and created a couple storage boxes where the back seat was. One of the boxes has a mobile power source with 2 100ah Dakota Lithium batteries and a power inverter. I use this power source to charge my Torqeedo and fish finder batteries, run my refrigerator, as well as a few other things: coffee maker, computer, electric blanket, lights, and fan. Life on the road can get expensive, but there are definitely ways to cut down costs. I always spend a day cooking a bunch of food so I don’t have to eat out at restaurants all the time, which also allows me to eat healthier.

H: Tell us about your pre-tournament routine. What does it consist of in a typical week? Break it down from travel and preparation through launch time.

Snyders: Prefishing for tournaments I’ll start by doing as much research as possible. Google Maps, Google Earth, and Apple Maps is where I start. I’ll mark all of the access point as well as areas that look good to fish. Then I’ll watch YouTube videos, and read about past tournaments. I’ll launch at as many places as possible and try to cover a ton of water until I find something promising. Then I’ll either break down the promising area as well as possible. Or try to find a pattern by duplicating it somewhere else. It’s always good to have a plan A, B, and C.

H: You have won unprecedented back-to-back KBF Angler of the Year titles. Was there a difference between how you approached the second one, as opposed to the first one, in terms of how you selected tournaments to fish or your approach to the fishing?

Snyders: No real difference in the game plan between 2019 & 2020. My main goal is to just get a limit, then take more risks and go for larger fish. The mental part of fishing plays a huge part. I’ve been very fortunate these last couple years because I haven’t had a lot of distractions and things have been going well for me outside of fishing as well.

H: I’ll throw a curveball here. We all love to read about and watch anglers catching fish, but you have so many victories and strong showings, it is your bad days that are the exception. Give us an example of a tough day on the water and how you deal with it mentally to turn things around.

Snyders: The biggest difference in my fishing right now compared to when I was younger, is when things aren’t going good, I’ve gotten a lot better at staying calm and focused. Getting upset by losing a big fish first thing in the morning can definitely take someone’s head out of the game. It’s hard to not let things like that get to you, but I’ve learned you’re better off staying present in the moment and not letting whatever happened in the past get to you.

For example, at the B.A.S.S. event at Lake Chickamauga this past November [2020], I had a tough time during pre- fishing. As I started the tournament, I realized after the first couple of hours that what I found wasn’t going to happen, so I abandoned it and started fishing new water. That’s one of the hardest things to do. At about 1 pm, I decided to fish some docks I hadn’t fished before, and that’s where I landed four fish. I couldn’t get that fifth fish, but I stayed calm and still managed to cash a check, and gave myself a chance. I was even fishing a lure I hadn’t fished before. When I was younger, I don’t think I would have made those same decisions. 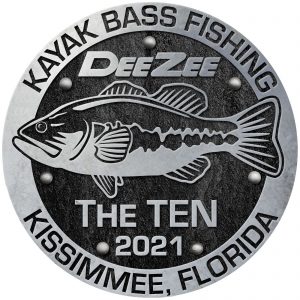 H: Now for Dee Zee KBF The TEN – you are the defending champion, and you are heading down to the Ten House in Kissimmee for the event. What are your expectations as you head down there in terms of the fishing and competition?

Snyders: I’m really excited to get back to the Ten House, it was an unbelievable experience last year. It’s the same time of year with similar weather conditions so I feel like I should be pretty well prepared. I’m still going to keep an open mind and fish as much new water as possible.

Both the Tenvitational and the TEN are gonna be tough events. It’s always tough when you fish against locals who know the waters, but with the TEN you are fishing against a smaller crowd. Kissimmee’s lakes are a unique grass fishery, and the fish behave differently in Florida than anywhere else. It’s a type of water where locals have an advantage. The California Delta is that way, too – you really have to know the water. Florida is similar to the Delta in that way. The TEN has really good fishermen, but it wouldn’t surprise me if a local got in through the TENvitational.

H: Thanks for your time, and congratulations on your amazing work on the water over the past two seasons. A final question: what are your plans for 2021?

Snyders: I’m going as hard as I can for 2021, I was contemplating cutting back a bit, but changed my mind. Still having way too much fun doing this.

For more information about lodging, dining and more in Kissimmee, Florida, visit https://www.experiencekissimmee.com/