KBFNC Champ Wins Big, and So Can You!

LET’S HAVE A CONTEST! (Read to the bottom for your chance to win!)

KBF and sponsors have infused fresh cash into KBF National Championship BONUS BUCKS payouts. The total amount committed has now climbed to $65,450
About seven weeks from now, the 2020 KBF National Champion will stand on center stage at the Guntersville, Alabama Civic Center, a big grin on his face, holding up a giant check imprinted with the number $75,000—the biggest paycheck he’s ever held. That’s a legacy-changing event for most families. But at the KBFNC, it’s just the start!

If the Champ registered for KBF’s incentive rewards program BONUS BUCKS – KBFNC, another $59,200 in bonuses is on the table. How much of that will be added to the day’s winnings depends on the angler’s level of support for KBF sponsors and on the photos he posts to the NRS Leader Board each day. Let’s break that down.

(Those decals will be in your Captains Bag at event sign-in, by the way.)

Does the Champ have a Torqeedo Ultralight electric motor mounted on his watercraft? That’s worth $5,000, too

Was his pfd manufactured by NRS, or did he carry or wear other NRS Fishing gear? Can he show $100 or more in product purchases from FishUSA during the previous twelve months? How about YakAttack gear; who doesn’t have some of that on his kayak, right? $2,500 for each!

If he owns and fished out of a Bonafide kayak, Native Watercraft, or Feelfree kayak, add $1,000.

Did he carry or wear Columbia Sportwear, have a Dakota Lithium battery and/or charge, photograph his fish on a Ketch measuring board, use his Power-Pole micro anchor to help position his boat, or record the event with his Tactacam camera? Does a ProTechNet secure his kayak and gear on his vehicle or trailer? Did he use Diatract to stimulate the bite or keep a Bending Branches paddle on his watercraft throughout competition? Cool! Tack on a grand for each “yes.”

Finally, how was his KBF Identifier Card displayed in the photos he submitted. If they were in a TourneyTag, Bill Rodriguez has antied up $500 for that.
Let’s see…. a sweep of all those bonuses comes up to…how much? I’ll do the math for you. It’s $37,000, bringing the Champion’s take home to $112,000.

Read on. The contest is just below. Keep going!

Hey, what about the Big Bass Brawl?

I’m getting there! KBF will payout out a guaranteed $12,950 for big bass in hourly, daily, and overall big bass bonuses. How much of that could one person possibly win?

Let’s say the Champ has the biggest bass of the Golden Hour (worth $200) and then takes four more hours at $100 each. (That’s good time management! Remember, we look at upload time, not photo-taken time.) Okay, that’s $600 in hourly bonuses. If he has big bass for the day, add $1,000. Now let’s say he repeats on Day 2 and Day 3 and he has the biggest bass of the entire Championship. That should cipher out to $9,800, if I did my “times and guzindas” right.

Now, add that to the $127,000 above, and the grand total—the maximum any single competitor could possibly score at Guntersville, rolls up to $130,800!

Amazing…but we’re not quite finished.

What if the Champ was in the squad that won the Top Team Cup Challenge? The Top Team splits $10,000, so his share of that is $2,000. In addition, if one of the Top Team members wins the Championship, that amount doubles, so his Top Team Cup winnings tops him off at $134,800 for the week.

Somebody check my math… could that be right? Can someone fishing out of a plastic boat win that kind of money these days? [Register for BONUS BUCKS – KBFNC]

Instructions: Assume the 2020 KBF National Champ registered for BONUS BUCKS – KBFNC. Consider the liklihood of his sweeping the bonuses, winning one or more Mystery Bass bonuses, and then winning some more cash in the KBFNC Big Bass Brawl:

How to Win: The winner of this contest will be the person whose FIRST prediction is closest to the actual dollar amount awarded to the 2020 KBF National Champion, including bonuses. No purchase necessar to participate in this contest, and KBF Membership is not required, nor must one be a KBFNC competitor to subit a prediction. Only one prediction per person (the first) counts, so if you guess twice, even if your second prediction is dead on…that’s too bad; that should have been your first guess.

Announcement of Winners: Results will be announced here and on the Facebook post on Monday, April 6 after KBF National Championship results have been verified and winnings are finalized, and the person submitting the winning entry will be notified via Facebook Messenger. 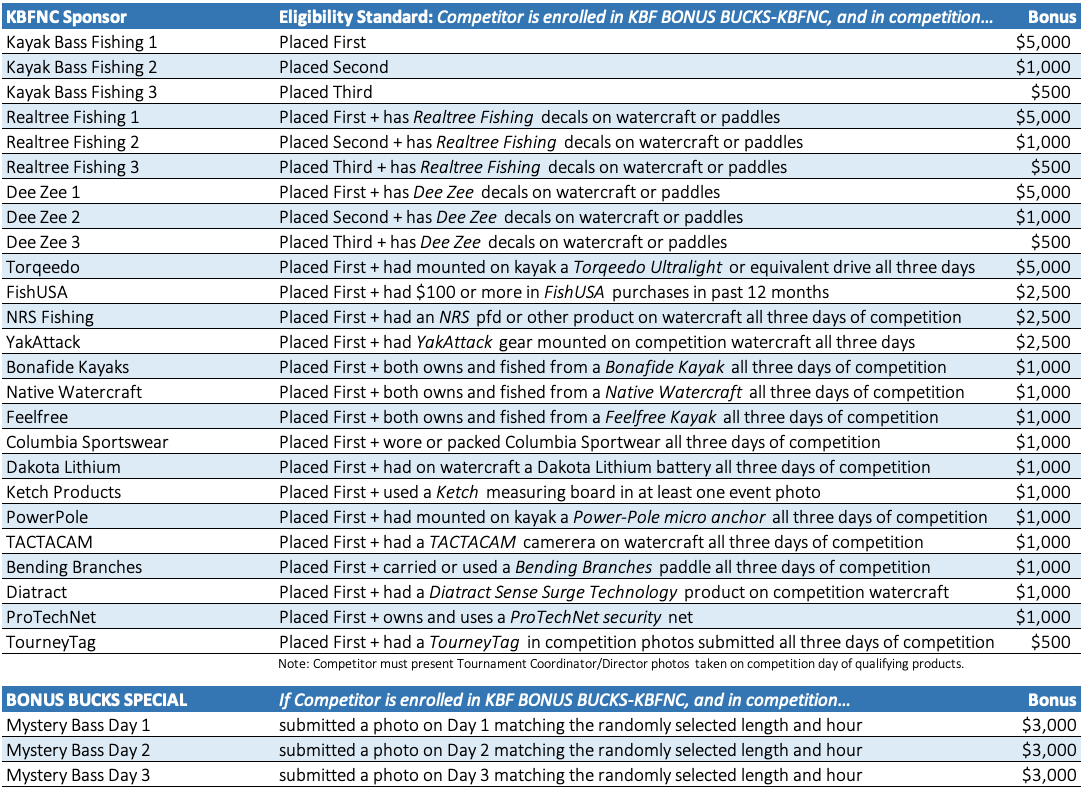 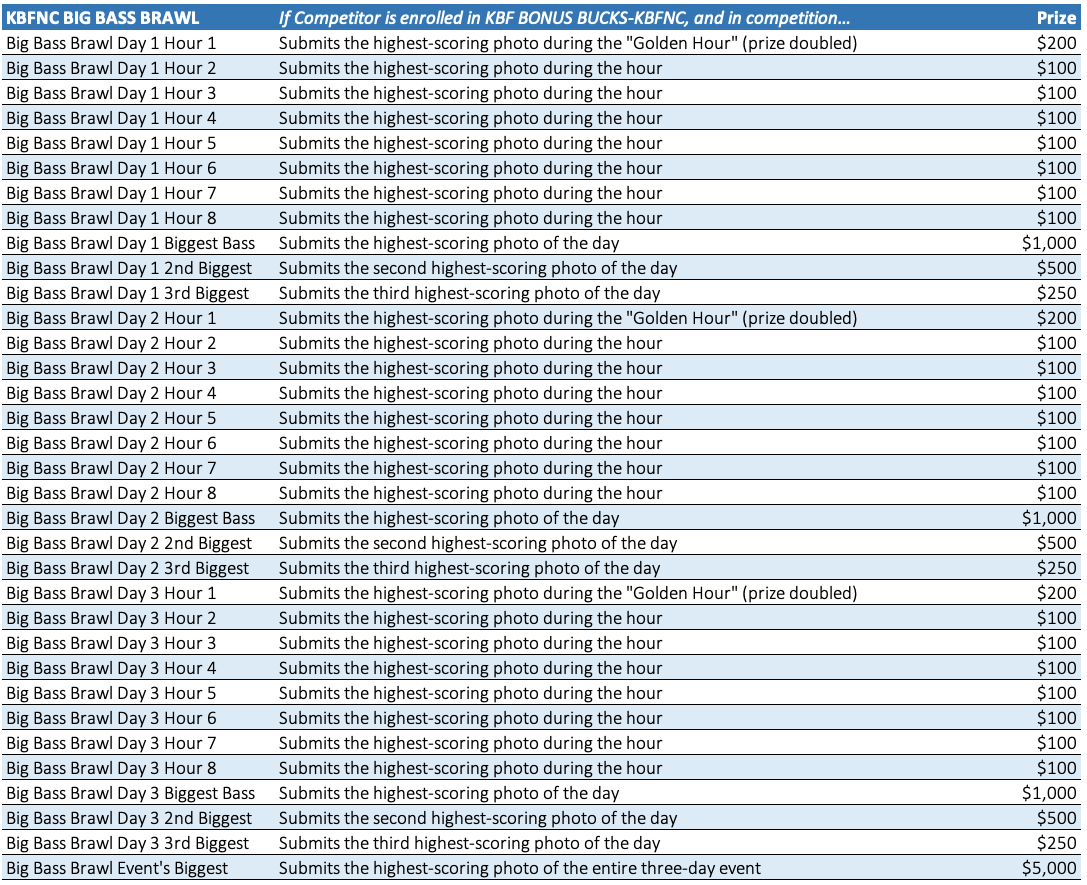