In the days prior to the KBF Championships in Shreveport, the big story was the big fish that were being caught during practice. Beginning on October 9th, KBF held a “Pre Fish Big Fish” event where anglers could post their biggest catch of the practice period. In all, 27 bass over 20” in length were landed. Lance McWhorter of the Jackson Kayak Fishing team topped the list with a 23.50” giant. On October 8th, Virginia’s Robert Brown (Team YakAttack) landed a monster that weighed just under 12 lbs. 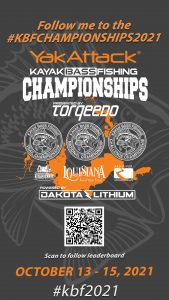 Those massive fish were just a small preview of the historic limits of bass that were to show up during the week’s events.

Day 1 of the KBF Championship tournaments at Shreveport-Bossier City, LA was hot, but that didn’t prevent anglers from lighting more fires on the Fishing Chaos KBF Ledlenser leaderboards. At the end of Day 1, 4 anglers had posted limits of over 100 inches, and several others were right behind them in the upper 90’s.

2020 KBF National Champion Matthew Conant struck early on the KBF National Championship and KBF Trail Series leaderboards, posting 85” in the early going. The exception was the Challenge Series leaderboard, where Ruben Martinez jumped out to a hot start with 90.75”. Virginia angler Casey Reed (Ketch Team) was close behind, followed by Jeff Penny, Cory Dreyer, Guillermo Gonzalez and Joe Lanzilotti. Those last two- Lanzilotti and Gonzalez – would begin to upgrade with huge catches over the course of the day.

The consequences of those catches played out on the KBF Trail Series. At the beginning of the day, California’s Daniel Balaba was in 1st place with Jody Queen close behind in 2nd place. By the end of Day 1, only 4 of the anglers in the top 10 at the start of the day remained there, with Queen falling to 15th place and Drew Gregory (Team Motorguide) having taken over 1st place. Angler of the year, and the anglers in DEE ZEE KBF THE TEN, will be decided on Day Two.

And here is where it got interesting. The winner of the Challenge Series Championship also earns a spot in the Ten House. At the end of Day 1, Joe Lanzilotti held 1st place on all three leaderboards. While he does not have the points to win Angler of the Year or qualify for DEE ZEE KBF THE TEN through the KBF TRAIL Series, he could win his way into the Ten House by winning the Challenge Series Championship. That trophy would also be decided on Day 2.

Day 1 of the 2021 YakAttack KBF National Championship presented by Torqeedo was feast for some, famine for others. The fish were eating, if you found them. Afterward, anglers talked about common strategies like picking apart cypress tree patterns, and also unexpected sources for big bites, like bluegill beds. In all, Day 1 set the table for the second course on Day 2: making the cut line for Day 3, when only the top 100 would compete.

At the end of Day 1, 4 anglers had posted limits of over 100 inches, and several others were right behind them in the upper 90’s. Several anglers made huge strides, and others held steady.

One who held steady was Guillermo Gonzalez. He added 100.25” to his huge Day 1 bag, to move from 2nd  place into 1st overall. Day 1 leader Joe Lanzillotti fell off his scorching day 1 pace, following up his 104.25” on Day 1 with 88.25” on Day 2. While Guillermo remained consistent, several other anglers improved position. Among them were:

Cory Dreyer, who has a reputation for making positive Day 2 adjustments at big events, made one of the biggest day 2 upgrades, adding 100.75” to his day 1 limit of 87.75, to move into 11th place overall at the end of the day.

But the biggest leap belonged to Brandon Bissell. A back-to-back KBF TRAIL winner this season, Bissell posted a whopping 105.75” limit on Day 2, a major upgrade over his 92.25” on Day 1. His dramatic surge moved him to within 6” of the overall lead.

On Thursday night, KBF competitors enjoyed music, food and drinks at The Lot in downtown Shreveport. They applauded Chad Hoover’s announcement of the top 100, and discussed how or why they did or didn’t make the cut. It was an evening of celebration and anticipation. Who won the Trail Series Championship? Who was the Top Team? Who was the Challenge Series Champion who would qualify for DEE ZEE KBF The Ten? As competitors received their custom Ketch boards, their custom Day 3 ID cards and stickers, the table was set for the main course on Friday, when all the questions would be answered.

The top 100 would continue to fish for the biggest prize of them all, the YakAttack KBF National Championship presented by Torqeedo, on Friday, October 15th.

Friday, October 15th saw the Top 100 anglers fish to the end of the 2021 YakAttack KBF National Championship presented by Torqeedo. The big stories of day 2 were those of adjustments that led to a surge in the standings, and consistency.

One of the anglers who made a huge leap on day 2 was Matt Vogt. Vogt started day 3 where he left off on Thursday, taking the early lead. Farther down the leaderboard, the overall leader Guillermo Gonzalez had only posted 4 fish, two of them small. In the meantime, Cory Dreyer resumed his push and hovered in the top 5 for most of the day.

Calm as ever, and consistent as a calendar, 2018 KBF Angler of the Year Cody Milton made his presence felt. He had averaged 100” per day, and Friday was no difference. As the morning wore on, he overtook the leaders and settled into first place with 300”. It was the first 300” 3-day limit in National Championship history. Below him, the leaderboard buzzed with culls. Matthew Scotch upgraded his early fish to join the top 5, Day 1 leader Joe Lanzillotti climbed back into the race and Guillermo Gonzalez sat in 2nd place for hours. And then, with a little more than one hour remaining, Gonzalez posted a big fish that added over 2” to his limit. It gave him the lead with 300.75”, the second 300 plus limit in event history.

The day would ultimately belong to Gonzalez, who started slow but finished strong, adding a final upgrade to his limit. His 3-day total of 303.75” was monumental, and he finished with an average limit of 101.25” per day. 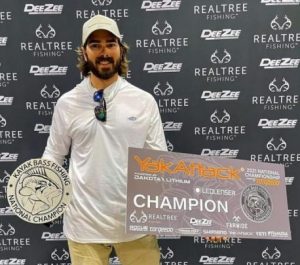 The Top 10 at the KBF National Championship were: 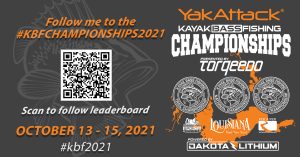