Not literally, of course. But if you attended the Yak Attack 2021 KBF National Championship presented by Torqeedo and powered by Dakota Lithium in Shreveport-Bossier City, LA, you would have noticed a large family in attendance at the daily check-in. It was the Bissells taking up a long row of seats, three generations deep, extended family and all. They were there to provide moral support for Brandon, who was on his way to becoming the 2021 Rogue Fishing KBF Rookie of the Year.

Brandon’s trip to the title may have ended in Shreveport-Bossier City, but it began with a set of dominant performances on the Realtree Fishing KBF TRAIL in early June on Lake St. Clair. On Saturday, he and his close friend Taher Ali went toe to toe in an epic exchange of smallmouth bass fishing, with Bissell emerging the victor with a final 101.5” limit. On Sunday, Bissell withstood furious rallies from a host of top anglers, and bested his previous day’s limit by .50”, accumulating a total of 203.5” over the weekend’s two events. It was an impressive showing, to say the least.

Brandon Bissell’s journey toward the Rogue Fishing KBF Rookie of the Year title began on Lake St. Clair and ended with a clutch performance in Louisiana. In this profile he discusses that journey, his gear, his tactics and his family, as well what it all means for him heading into 2022.

1. Let’s start with your family’s attendance at the KBF National Championship. Who was there, and did they travel with you, or surprise you?

First and foremost, I’m incredibly lucky to have the family support that I do. Between my wife’s encouragement to travel and fish, to the support from my immediate family and my in-laws; I truly believe my family support structure is second to none. Once we knew that I was going to travel to Louisiana to fish the National Championship, my in-laws immediately started planning the logistics of all of them going down as well. While my wife and I drove down, the rest of the family caught a flight to Dallas and drove over to Shreveport. We all stayed in an Air bnb with my wife’s parents and grandparents, her brother, and our niece. I’m truly thankful for them all traveling down to support me that week, it really made that whole week feel like one big celebration for a great 2021 season. 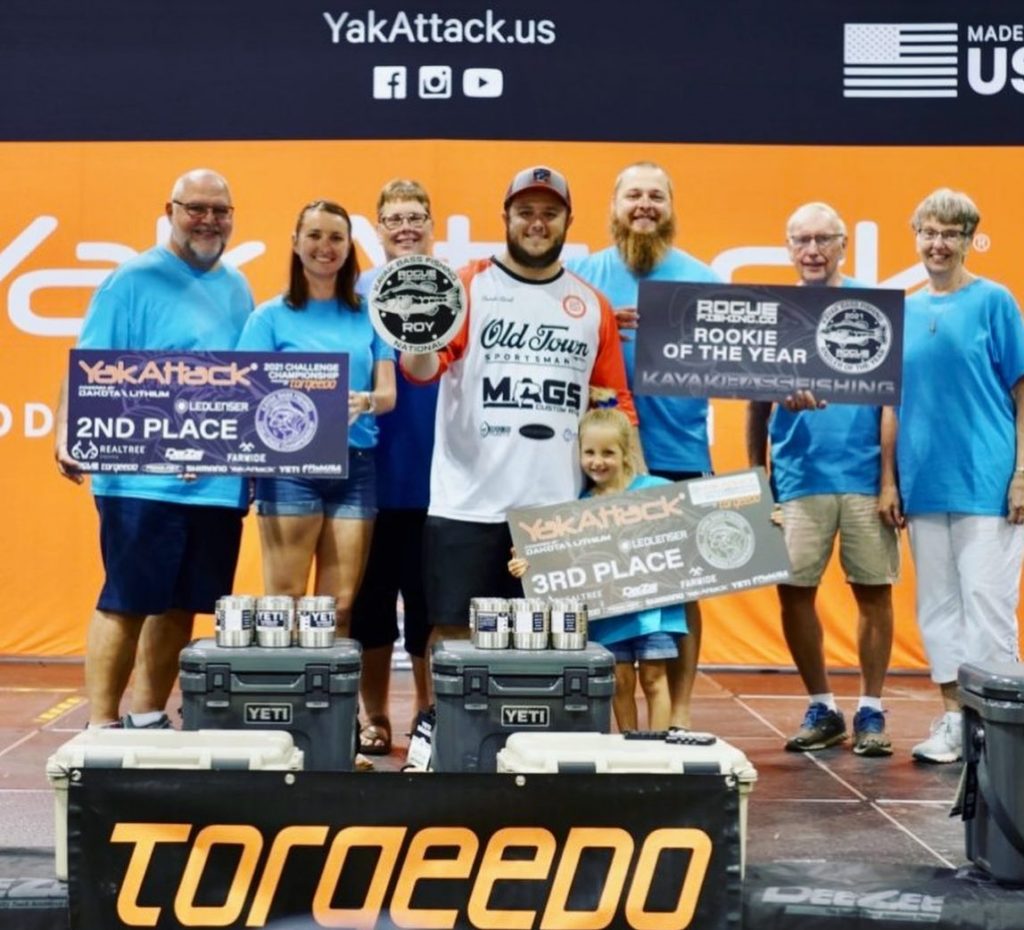 The Bissell Family at the 2021 Yak Attack KBF National Championship presented by Torqeedo.

2. Let’s turn to gear. What’s your base set-up for kayak fishing?

For 2021 I fished out of an Old Town Autopilot 136. This was my first year fishing out of an Autopilot and I can’t wait to hop back into that boat again in 2022. Old Town really checked off every one of my boxes when they designed this watercraft. I stand and fish all day, move across the lake effortlessly, and have more storage area in the rear tankwell than I know what to do with. For electronics I’m running a Humminbird Helix 9 Mega Side Imaging with Mega Live forward-facing sonar.

As for my rods, I’ve been extremely lucky to work with Mags Custom Rods over the past year. I truly believe that these rods are the best bass rods I’ve used since I’ve started tournament fishing. The fact that the company is ran and operated by down to earth, hardcore fisherman is just icing on the cake. I’m already in the process of stocking up on more Mags Custom bass rods for the 2022 season, and can’t wait to get them down to Florida in a little over a month.

3. You were a rookie on the KBF Trail in 2021. Describe your experience on it leading up to Nationals. When did your KBF journey begin, and when did you decide to go all in?

The 2021 season really kicked off for me during the KBF Trail Events on Lake St Clair in early June. Lake St Clair is a lake that I have some valuable experience on but I never would have guessed that the weekend would have ended with me winning both Trail Series events, setting me up well in both the AOY and ROY races. After that weekend, I knew that something special was in the works and that I needed to make as many KBF events throughout the rest of the year that I could.

After a couple average finishes at East/West Harbors in Ohio, I was still within striking distance of both KBF Rookie of the Year and the KBF The Ten. Unfortunately, with limited time off, I knew that my last chance to achieve my goals of bringing home both Rookie of the Year and a spot in The Ten would come down to the National Championship in Shreveport, LA.

4. Now, for the National Championship, Trail Championship and ROY race. Let’s start with ROY. When did you think you might have a chance at the title, and did that affect your approach to fishing the lake you fished near Shreveport-Bossier City?

Coming into the National Championship I was sitting in 2nd in ROY standings. While I have never fished in Louisiana or anything closely resembling Caddo Lake before, I knew that I was within striking distance of the title if I could put together a solid first 2 days of the tournament. During day 1, I had to play the not-so-fun game of fishing as efficiently as possible while trying to save some fish for days 2 and 3. When day 1 was finished, I was sitting in the top 20 overall for the tournament which had me sitting in first for ROY and also within a qualification spot for The Ten.

With day 2 being the last day that counted towards ROY and The Ten standings, I knew it was time to fish as aggressively and thoroughly as possible, even if it meant sacrificing my third day’s potential catch… Day 2 ended up being the best day of fishing I’ve ever had in my lifetime. At the end of the day I had put up a 105.75” bag, the largest of the entire event, the bag that would secure me both ROY and a spot in the coveted Ten House.

5. Describe your approach to the lake during Nationals week. How much time did you spend pre-fishing? Did you do any map study? What was your approach to reading the lake, and then how did that translate to success on the water?

When I started to gameplan for the National Championship, I knew that I would be operating with limited time, and limited knowledge on the bodies of water we would be fishing. Without being able to take more time off work, I had two and a half days to pre-fish for the tournament. My goal for practice became trying to find patterns that I had confidence in and find areas that would translate to “my” style of fishing. Luckily, I was able to do just that early off on day 1 of practice. I found some isolated Cyprus trees and scattered vegetation that had roaming fish around. I was hopeful that I could milk these areas for three days.

6. It’s the first morning of the KBF National Championship and Trail Championship. What’s going through your mind in the minutes before you launched.

Launching on day 1 of the National Championship was an experience I won’t soon forget. There were 30-40 other anglers launching at the same spot and you could feel the anticipation and excitement in the air amongst the anglers. Just being amongst that group of individuals that not only qualified for the event, but shared the common goal of doing as well as possible that week was an award enough for to make the 18 hour trip.

At the start of day 2 I told myself that I was going to try and catch as many fish as possible even though I knew it may be jeopardizing my day 3 catch, because day 2 was what would determine whether or not I achieved my goals for the week. On day 1 I fished my areas somewhat sparingly, moving through rather quickly, catching fish and moving on. On day 2 I went through those areas in a much more methodical manner, making multiple casts to one spot, and even coming back through and fishing the same spots later in the day. These changes allowed me to capitalize on the fish that I believe were moving in and out of this area throughout the day. 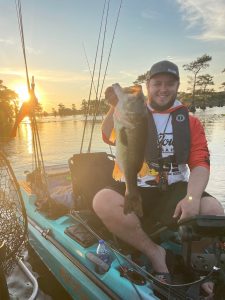 8. It’s Day 3. You made the cut, and you have won the ROY. What’s going through your mind during Day 3 of the National Championship?

Launching the morning of day 3 was such a cathartic experience. So much so, that it’s actually quite difficult for me to put the emotions I experienced that morning into words. While on day 1 I was just happy to be there and be a part of the event, launching on day 3 sitting in 3rd place, I knew that not only had I accomplished my goals for the week but that I was also on the cusp of a truly spectacular week of fishing. I had launched at the same spot all week and while over 30 anglers launched there on day 1, only three anglers were left launching there on day 3. This drastic difference helped set the tone for the final day, a culmination of a week’s worth of hard work.

9. When it’s over, you won substantial prizes, you are KBF Rookie of the Year and you qualified for DEE ZEE KBF THE TEN. Describe the feeling.

The 2021 season is one that I won’t soon forget. Walking across the stage in Shreveport and being named 2021 KBF Rookie of the Year and a qualifier for The Ten house was an incredibly rewarding experience. To have a season culminate with you achieving your major goals, it’s a dream come true really. I’m still waiting to wake up.

10. What was your family’s reaction to your victory?

While I do have confidence in my fishing skills and ability, nobody has more faith in me and what I can achieve than what my family does. I know that my family couldn’t be more proud of my accomplishments the week of the National Championship, and I honestly think that they knew all along that I was going to have a fun and ultimately successful week. There really wasn’t any better feeling than being able to celebrate the week with them, a celebration not only of a great National Championship week, but of a great 2021 season.

For me, 2022 is going to start off full speed ahead. Next month we have the KBF Trail Series, TENvitational, and DEE ZEE THE TEN all down in Kissimmee, Florida. From there, the goal then becomes re-qualification for The TEN House in 2023. While my KBF schedule isn’t definitive as of yet, I am excited for the schedule that they have put together for us and can’t wait to get the 2022 season underway.

Interested in becoming a KBF member for the 2022 Season? Join KBF here: https://www.kayakbassfishing.com/join/

KBF Rookie of the Year is Sponsored by Rogue Fishing Co 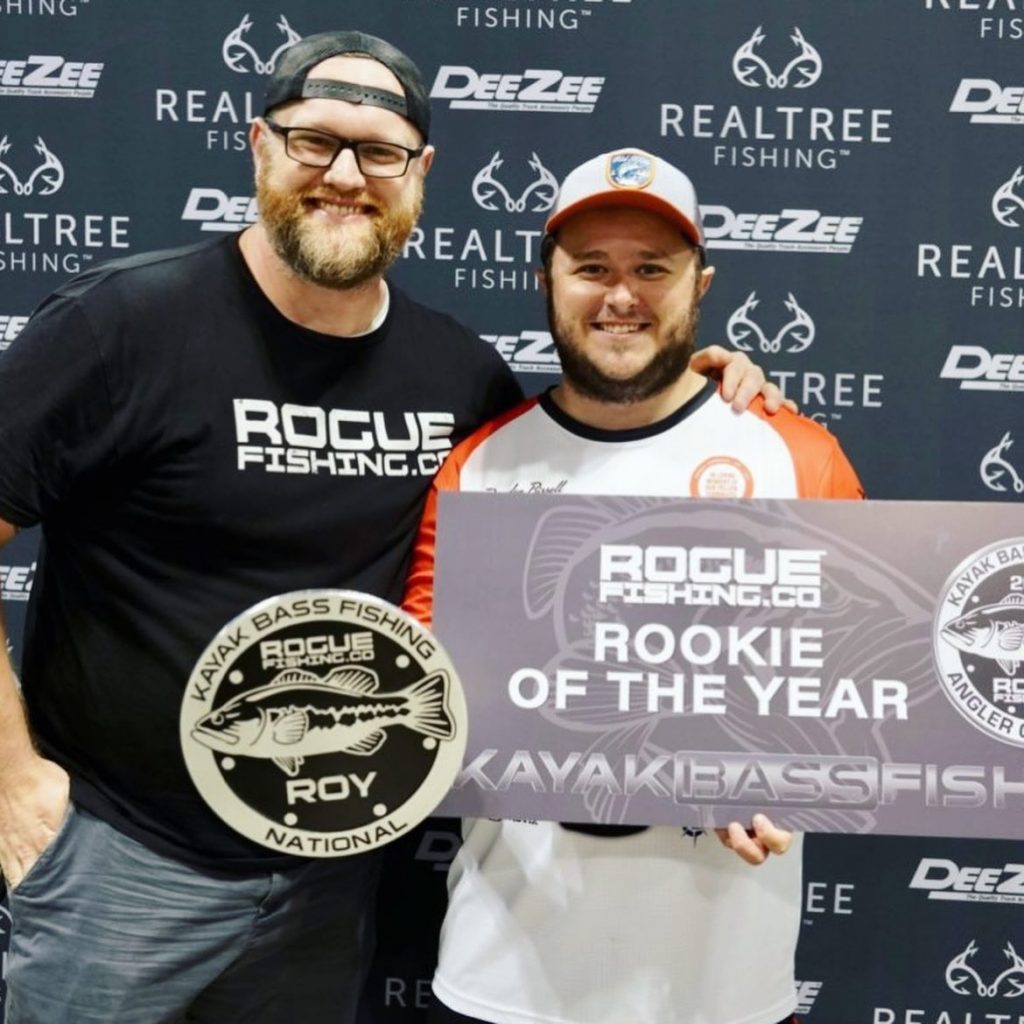