2022 Farwide KBF Angler of the Year Update: The Home Stretch

“Angler of the Year.” The phrase carries a certain weight. It’s like feeling a one ounce jig at the end of your line at the moment a big bass eats it. It has a center of gravity. And it moves you in that inspires you to want it to happen.

The names of the previous Kayak Bass Fishing (KBF) anglers to achieve that distinction are known throughout kayak fishing. They are Cody Milton (2021 & 2018), Rus Snyders (2019 & 2020), Jamie Denison (2017) and Jay Wallen (2016). When the points are added up after anglers travel to Paris, TN for the  2022 KBF Trail Series Championship on Kentucky Lake this October 19-20, another name will join their accomplished ranks.

The name of the 2022 Farwide KBF Angler of the Year is already in the current points rankings on Fishing Chaos. Who is it? We don’t know the name, but we do know some of the important factors that will make that name stand out at the end of it all. Below we consider a three of those factors…

Two-thirds of the season is behind us, and over 600 anglers registered for and competed in the Realtree Fishing KBF Trail Series presented by Dee Zee Truck Accessories and Powered by Dakota Lithium. Each angler’s best three scores are tallied in the rankings. In theory, you have only to fish and do well in three events over two separate Trail weekends, and maybe use a fourth event to drop a lower score. Some anglers competed in twice that number of events, or more, earning points along the way.

The goal: to accumulate as many points as possible heading into the Championship round, where all the competitors meet to decide the outcome on the same water. This year, it will be Kentucky Lake. There, points and a half will determine the winner; that is to say, a score of 900, rather than 600, will be awarded to the best angler over two days of fishing there.

What does that mean? It means that an angler who isn’t event in the top 20 could jump ahead and take the top prize by besting his or her peers that week. That is of course relative to how the anglers ahead in the standings perform. Should much of the field collapse and earn lower points at Kentucky Lake, you have a chance to jump up and take the title. Additionally, an upward swing of 100 or 200 points might result in a big check, so that theoretically, even an angler 100 or 200 points behind the leaders could win the two-day event at Kentucky Lake. While he or she might not win the AOY title, it may be enough to qualify for Dee Zee KBF the TEN.

As it stands, only one angler (Cody Henley) has three perfect scores. Several others (Josh Stewart, Drew Gregory, Caymen Rasmussen) have two perfect scores in two events, and could possibly earn a third before it’s over. But they will all still have to fish well at Kentucky Lake. In sum, it’s about both position and performance: how you finish is relative to how many points you have going into the Championship, and how well you finish the season in the final inning. 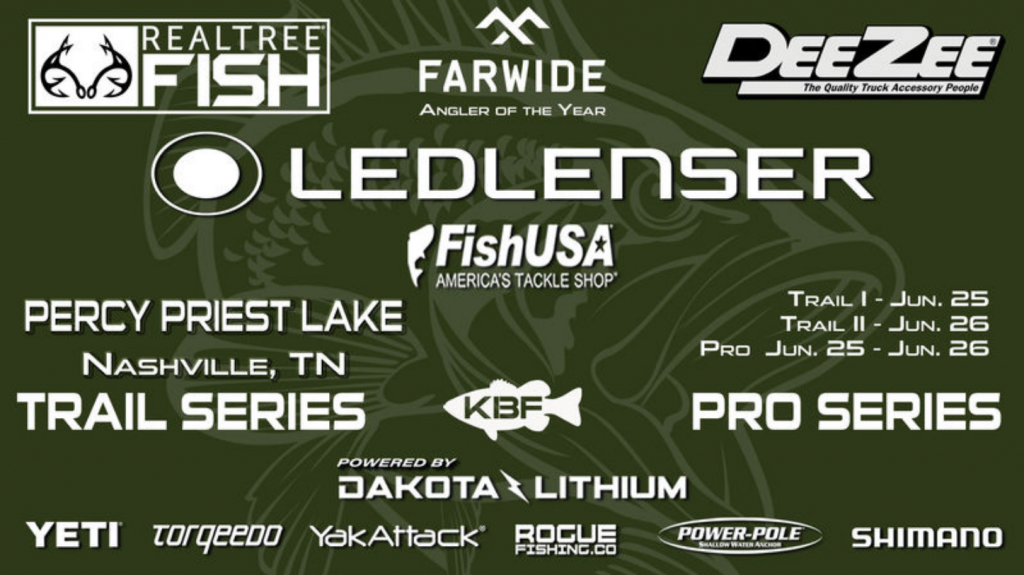 Note that two of the 3 remaining KBF weekends are double-headers, so competitors in different regions will be watching the AOY leaderboard results in real time as they battle for position.

Note that some of the lakes (Erie, Clear Lake) are standards on the KBF Trail schedule, while others like Percy Priest are new to it. Will anglers fish history in order to improve their ranking? Or will they favor fresh water and new challenges?

And what about the summer anglers? With the post spawn period out of the way, summer patterns will determine a great deal. Who are the best anglers at finding fish during the hottest, brightest months?

Speaking of regions….a look at the Farwide KBF AOY leaderboard shows how far along west coast anglers have come this year and catching up to the rest of the country in the sport of kayak fishing: four of the top 10 anglers ( Cody Henley, Caymen Rassmussen, Bryce Gibbs and Anthony Garcia) in the KBF Trail points standings hail from the west coast (the same four are also rank high in the KBF Pro Series, where a fifth west coast angler – Chris Spencer –  fills out the 5 from out west). In all, west coast anglers hold 9 of the top 20 spots across the two major KBF leaderboards.

That rate of distribution makes sense, given the structure of the 2022 Realtree Fishing KBF Trail & Pro Series itinerary. It distributes 17 tournament weekends over 7 different regions. Those included:

After the South/Southeast, the combined West Coast and Mountain regions had a total of 6 events, providing anglers from the western states with a fair opportunity to compete with southern and northeastern anglers who have long dominated the ranks of kayak bass fishing.

When asked about the state of the sport out west, up and coming anglers Cody Henley and Caymen Rasmussen shared the same view: it’s growing, and growing fast. Henley noted: “We will get to where the South is one day. It will take time. But we had 77 anglers register to fish with our local club [in Utah] this weekend. Two years ago, we only had 25.” Rasmussen added: “There are a lot of anglers here who are new to the sport. Not all of them will travel long distances to fish tournaments – not yet.”

Take a look also at the anglers who are outside of the top 10, but within striking distance. Nearly all of them are from the South and Northeast. An angler living in a central location (say, Tim Isaacs of West Virginia) could reasonably drive to Percy Priest, Erie and Lake Winnipesaukee. An angler from Missouri could do the same to reach the first two of those lakes comfortably as well, while an angler from the Mid-Atlantic states could drive to the last two with relative ease.

In the end, how will geographic factors favor the more experienced anglers who travel well, and far, to familiar waters? Or will fresh eyes, arms and legs, fishing new water for the first time, show up and shock the favorites (see Matthew Conant, 2020). That remains to be seen.

“There are always questions about why the Trail Series Championship scores are weighted,” said KBF founder Chad Hoover. “It’s a championship, so it should count for a little more, but more than that it’s the only time we have all of the anglers from the Farwide AOY race on the same water, at the same time and under the same conditions.”

As it stands, everything could still change. Five remaining KBF weekends totaling 10 separate Trail events are yet to be fished. Each and every angler has a chance to move to the top of the rankings based on performance, points and patterns. These are the exciting variables that make every KBF Trail season a challenge that concludes each year at the KBF Trail Series Championship. This year, those challenges will all be met at Kentucky Lake on October 19-21, where a new Farwide Angler of the Year will be crowned.

Farwide is the premier search engine for wildlife enthusiasts, providing up to date news on fishing, hunting and more. Sign up and download the app today!