This weekend was the final KBF Trail stop of the 2022 season on the west coast. Over the past several years, Kayak Bass Fishing had invested considerable resources in west coast events with the aim of bringing new anglers into the national conversation. Several of those anglers have established themselves as bona fide contenders at any event they fish, and one of them conquered Dee Zee KBF The Ten in 2022. His name is Cody Henley, and he was one of several dozen kayak anglers who set out to Clear Lake, CA this week to earn valuable AOY and ROY points and win prizes.

Look at the Kayak Bass Fishing Farwide Angler of the Year leaderboard, and you will see why Henley and other anglers loom large on the national KBF scene this season. They have earned their points by driving the long distances across the wide open western states, grinding out bites across Arizona, California, Utah and Colorado. This weekend, three of those anglers cemented their positions in the top 5 on that AOY leaderboard. They will head into the KBF Trail Series Championship at Kentucky Lake with a full head of steam.

It has been inspiring to watch the west coast scene grow over the course of the 2022 season. It is perhaps fitting, then, that the final event also brought out the largest crowd of competitors as anglers descended on Clear Lake for a weekend of kayak bass fishing.

At mid-morning, a familiar name was atop the Ledlenser KBF leaderboard. Utah’s Caymen Rasmussen had claimed first with an 85.5” limit. Patrick Wilson was right behind him, however, while the rest of the field had posted lots of bass, but not many 5 fish limits. Entering the final third of fishing time, Patrick Wilson passed Rasmussen, making his case with a limit of 87”.

Shortly thereafter, Bryce Gibbs showed up. Gibbs had been stacking strong finishes all season long, but had yet to secure a victory on the KBF Trail. Today would be his day, but it would be close – when it was over, his 89” limit held on as Wilson surged behind him, finishing just .5” short of Gibbs (Wilson would have the final word on Sunday, as we will see….)

Gibbs described the bite on Saturday as follows:

“I found my quality bites on frogs. I caught fish on jigs in practice, including a 7.5 pounder, but the frog bite was what produced. My main bait was a Spro Flippin’ Frog, and I started early with a good fish, a 19” I think, but then I missed every bite for the next two hours.

“The bass weren’t all eating the frog in the same way. Some would just pick it up and move it, like bass do on a spawning bed. Others would jump three feet out of the water to eat it. I landed four keepers between 11-12 in the morning, and that’s what finally filled my limit. You just had to wait to be sure the fish had the lure.”

With his second KBF TRAIL victory (he also won at Pueblo in 2020), Gibbs moved into the top 5 of the KBF Farwide Angler of the Year Standings. In his words “I’m going to Kentucky Lake this year, and my goal is to qualify for The Ten House again.” Gibbs competed in Dee Zee KBF The Ten in 2020 and fished the 2021 edition of the event, making the Arizona native the first West Coast angler to have qualified for the event. Between Gibbs’ appearance and Henley’s victory there in 2022, it is clear that west coast kayak anglers are here to stay.

You would think an angler with that pedigree would arrive on the kayak fishing scene with the sort of kayak that looks like NASA engineers built it. But Wilson isn’t one for pretense, and he isn’t ashamed of how he started competing in kayak tournaments:

“I wanted to start kayak fishing, so I signed up for the Yak-A-Bass team event in November of 2021. I wanted to win the raffle boat they had, an Old Town Sportsman PDL 120, because I didn’t have a fishing kayak. I fished the event from an inflatable SUP I bought at Costco. I didn’t win the Old Town kayak, but I brought enough cash to buy it from the guy who did win it.”

Fishing from the same Old Town kayak, Wilson fished his second KBF event of the season (he fished at Folsom in February). The result was impressive: he placed second on Saturday, and won the Trail on Sunday. In doing so, he also won the KBF Pro Series trophy.

“I wasn’t planning on fishing this weekend because I made a scheduling mistake when trying to get time off for the West Coast Championship. But I signed up for the KBF Trail at mid week. I have fished Clear Lake a bunch and know it well, and I knew they recently sprayed the grass at the north end of the lake, so I fished the rock piles at the south end of the lake.”

“Those rock piles have deep water access, with drops to 20 feet on one side. I stayed on one pile and fished it with three different baits. The first was a drop shot, the second was a Senko and the third was an underspin rigged with a Keitech swimbait. The drop shot produced most of my 10 keepers on Saturday, and three of my eight keepers on Sunday. I landed a pair of five pounders on Sunday, and that was big. You usually need a 25 pound bag to win at Clear Lake, but there were lots of 3 pound fish around this weekend, so landing those bigger fish made the difference. I had solid bags every day but today I had two 17” fish and an 18” to go with those 20” fish.”

Wilson is impressed with the kayak fishing scene and KBF. “I love the price point, so every working stiff can fish the events, like I do. I appreciate what you [KBF] are doing, and I see it has unlimited potential.”

Wilson’s remark is an appropriate finish to the west coast KBF season, in a year which has brought new names and faces to our sport and new kayak anglers like Wilson to the fold. 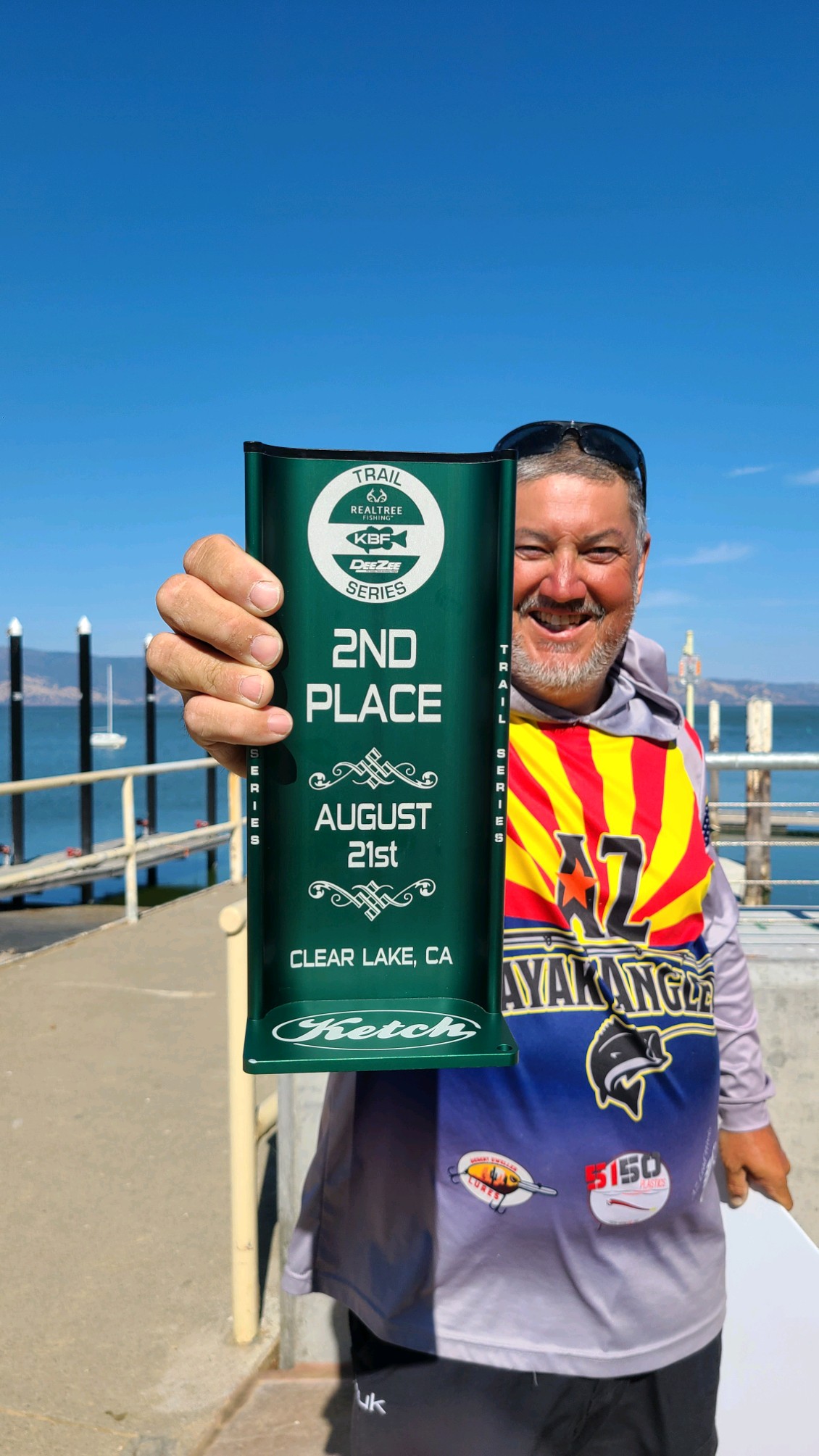 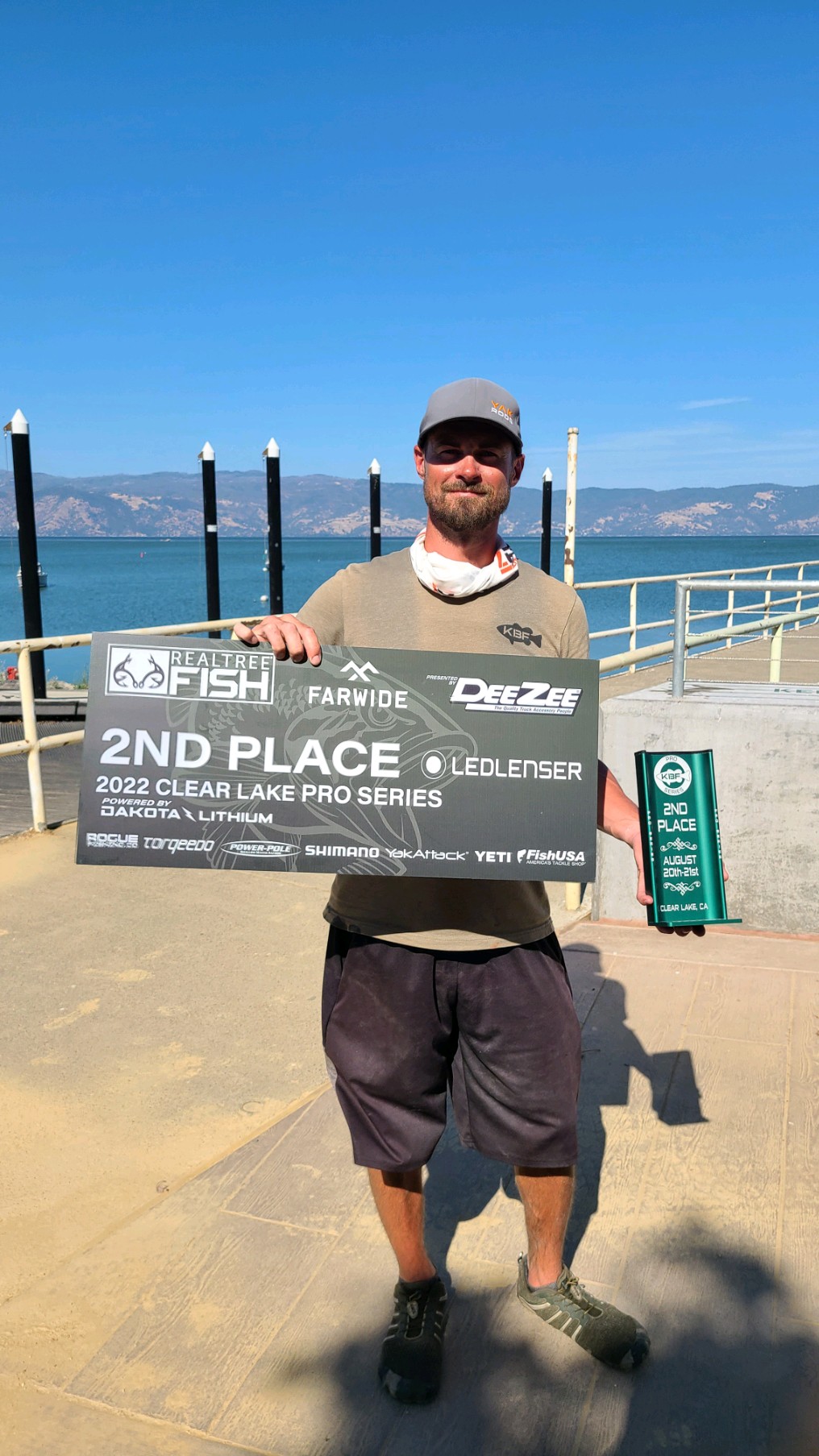 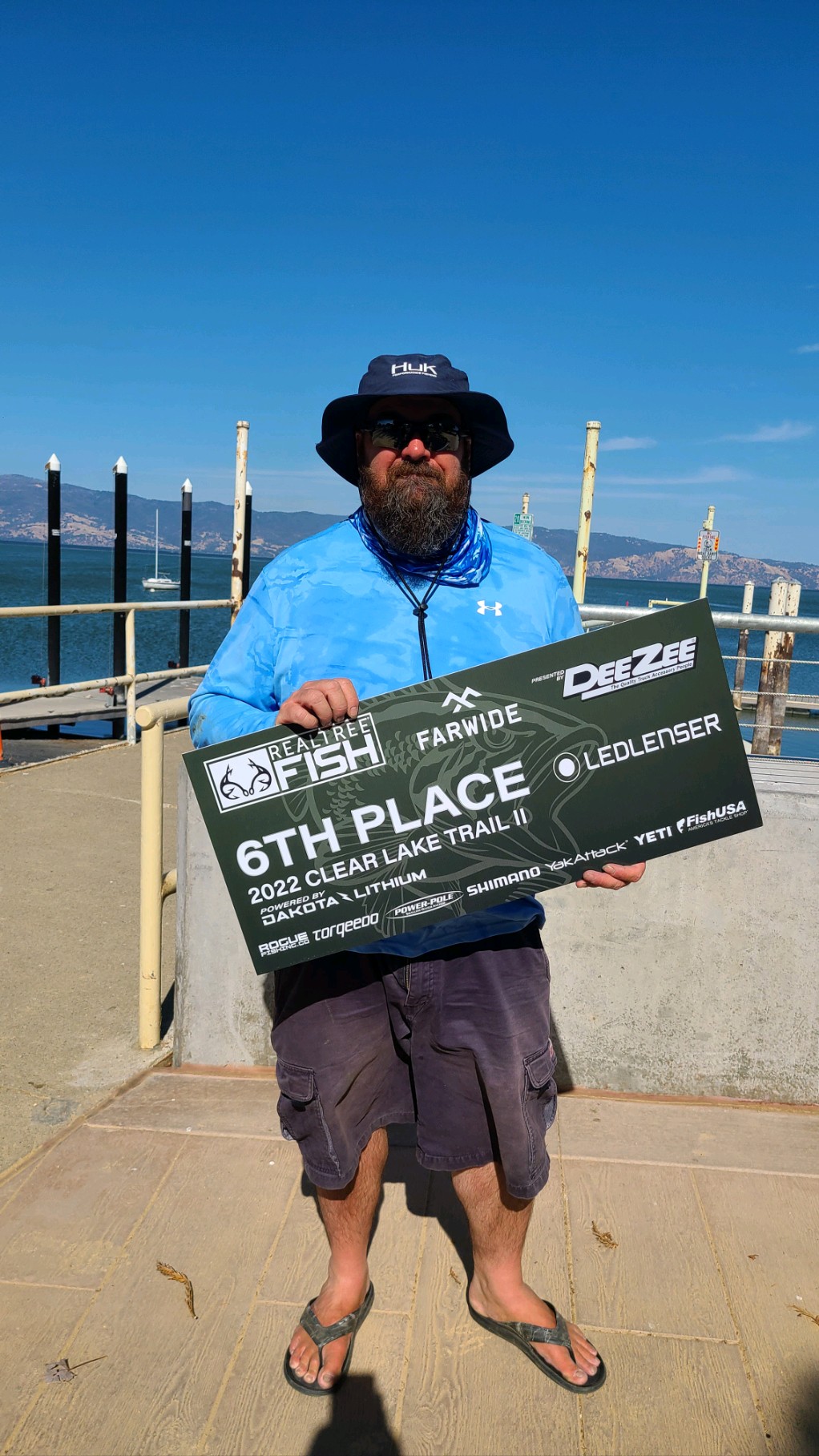 Up next: The 2022 Realtree Fishing KBF TRAIL & Pro Series will conclude on August 27-28 at Lake Winnipesaukee (ME). 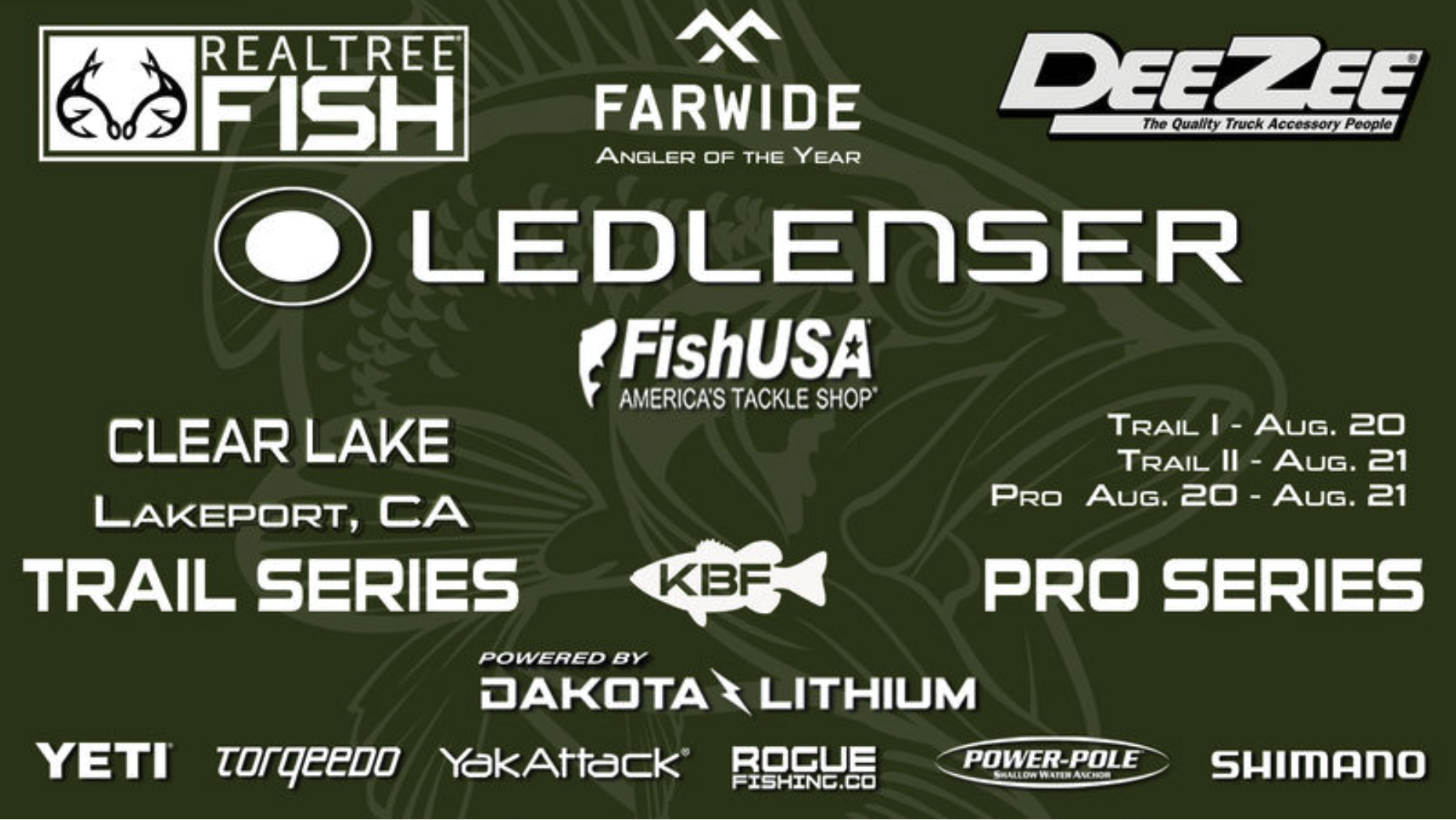