Colorado is not the first state that comes to mind when someone mentions bass fishing.

Kenny Hood is okay with that, because he will drive across the country to fish a tournament. Literally.

In 2016, he drove 23 hours without stopping from his home in Colorado to fish a KBF OPEN event in West Virginia. He got there, launched his kayak on Bluestone Lake, fished for a bit and then fell asleep an hour into the event. When he woke up 2 hours later, his kayak was near the dam. That’s when he caught his fish.

Fish near Kenny Hood, and his enthusiasm is contagious. I know – I shared the water with him for three days at the 2021 KBF National Championship in Shreveport-Bossier City. We would talk at the ramp before launching and after lines out, we crossed paths on the water and we chatted at the HQ. He shared tactics and patterns, discussed lures and retrieve speeds, and was as generous as an angler could be short of handing you his fish.

He finished 61st overall at the 2021 KBF National Championship, another good finish in a career that so far also includes 2nd and 3rd place finishes at KBF TRAIL tournaments (at Table Rock in 2020 and Wilson Reservoir in 2017). Add to that a 35th overall finish at the first KBF National Championship (2016) and he has compiled a formidable record in his many travels.

Now, after driving tens of thousands of miles, a national tournament trail is coming to Kenny Hood. On April 30-May 1, 2022, the Realtree Fishing KBF TRAIL Series presented by DEE ZEE and powered by Dakota Lithium will have its 8th stop of the season on Colorado’s Chatfield Reservoir, just south of Denver.

When I noticed that KBF was headed to Colorado, I made a point to reach out and ask him about the bass fishery at Chatfield Reservoir. He was preparing to fish 3 simultaneous events on Table Rock the following day. Like I said, Kenny Hood travels.

Hank: Tell me about Chatfield Reservoir.

Kenny: It’s a heavily regulated lake. For example, you have to have your motor and boat inspected if you want to fish it with a motor. Because kayak tournaments launch early, that won’t be an option, so you will have to go the day before. They don’t want invasive species; I get it – they are trying to mitigate their spread. But if you plan to show up and fish that morning, you can’t use a motor without having it inspected.

Chatfield was expanded, with a new marina on the south end. Most of our lakes are run by the U.S. Army Corps of Engineers, and Chatfield is too. It’s one of the few lakes around here that you can actually fish from a kayak. Like I said, Colorado lakes are regulated.

Hank: What about the fishery?

Kenny: Anglers will catch lots of smallmouth bass on the short end of the spectrum. The lake has some big Smallies, but you know how they can be. I think the bigger fish will be the lake’s Largemouth Bass. I expect a finesse pattern – Ned Rig, Drop Shot – will win it. If the wind is blowing, though, it will be hard to hold position and finesse fish without a motor.

Hank: Will weather be a factor?

Kenny: It all depends on the wind. The timing of the event is good, because the lakes are finally warming up. We have water temperature sin the 50’s now. But the pleasure boaters won’t be out yet. Chatfield is popular with them. If the event had been later in the season, that traffic might have been an issue. 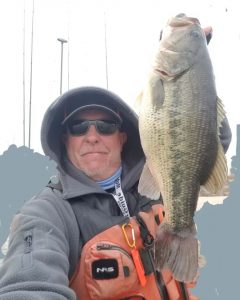 Before getting off the phone to prep for his event, Kenny directed me to his Facebook page, where he recently posted a big Colorado Largemouth Bass. It was a 6.7 lb. tank, caught on a chatterbait. “I’ll be throwing one of those at Chatfield,” he added. “Like I said,” he concludes, “it’s warming up.”

Kenny Hood is sponsored by StickyVinylGraphics.com and he is on the Pro Staff of Menace Baits.

Sign up for the KBF TRAIL & PRO Series at Chatfield is open until midnight on Thursday, April 28th.