You know the song. “California knows how to party.” After three days of intense KBF TRAIL competition on Clear Lake last week, California also knows how to crash a party, as West Coast anglers made the most of their chances to make some noise in the FARWIDE KBF AOY points race.

The RealtreeFishing #KBFTRAIL presented by DeeZee began a west coast visit lasting 3 days (August 20-22) on beautiful Clear Lake, CA. Co-hosted by Yak-A-Bass, who held a parallel club event for two days, the KBF TRAIL returned to Clear Lake for the first time since 2020, when defending KBF Angler of the Year Rus Snyders won 1st place  on his way to becoming KBF Angler of the Year.

This year, California’s Daniel Balaba used the KBF TRAIL on Clear Lake to vault himself into 1st place in the AOY points race. But it wasn’t just California that crashed the party: Utah angler Caymen Rasmussen’s strong weekend also him in the conversation. With two events remaining (at Kentucky Lake, plus the Realtree Fishing KBF TRAIL SERIES Championship presented by DeeZee), the 2021 AOY points race will go to the wire.

The weekend did not begin with Balaba and Rasmussen atop the leaderboards, however.

Anglers began chasing California’s famed big bass, prizes and precious AOY and ROY points on Friday, August 20th. After one hour of competition, Kirk Gossett held the lead with 35.5” with Pua Yang close behind at 35”. While the early leader Gossett remained in the top 10 throughout competition time, the slow start to the fishing soon vanished like a San Francisco fog as anglers began posting more catches. At the halfway mark of competition time, Trent Hoover jumped out to a slim lead with a limit of 94.25″. Tas Moua was only 3″ behind Hoover, and closing in with a recent cull.

Hoover began culling fish, and with two hours left in competition time, he had upgraded to 98”, a formidable average of just over 19.50” per fish. In the meantime, Pua Yang re-emerged in the standings, and began creeping up through the top 10. Johnny Bayard led the Bucketmouth Brand Big Bass Leaderboard with a 21” Largemouth, but with 2 hours left, if an angler in contention landed a giant, it could be enough to close in on the lead.

Trent Hoover held out on his way to victory. But Daniel Balaba uploaded a limit that tied him for second with Mike Lavoie late in the day, and a big bass tie breaker earned Balaba third place overall. It would be the first of three high finishes for Balaba over the weekend, finishes that turned the KBF AOY landscape on its head.

Trail II began on Saturday with Rachel Uribe posting fish early, and holding the lead with 84.25” until the halfway mark. As competition entered the seventh-inning stretch, Uribe upgraded .25”, and then Joshua Bryant tied Uribe with an 84.5” limit of his own. Bryant continued to cull fish, climbing into sole possession of 1st place with an 89.5” limit as the competition hours dwindled. 8 anglers passed him however, with the previous day’s winner Trenton Hoover taking 4th place, and Cody Henley winning the1st place trophy.

Rasmussen described his first 2 days of competition: “I fished isolated grass mats with a buzz toad and a under spin. Day 1, was awesome. The fish were fired up. I was able to throw the buzz toad all day and the bite never seemed to stop. Day 2, started off good with the first fish being 18 inches, but as the day went on the bite slowed dramatically. 4 hours into the day and I still didn’t have a limit. I made a change to an under spin. I had my limit within the next 30 minutes and started culling.”

Sunday began with Caymen Rassmussen taking an early lead, while Friday’s champ Trent Hoover again was in the top 5 early on. Rasmussen had finished in 5th place on Friday and 8th place on Saturday. Another strong finish could place him in contention for the top 10 in the AOY race.

Rasmussen described his final day: “Day 3, was exactly the same as day 2. Caught one fish on the buzz toad first thing, then put a limit together with the under spin. Over all 3 days the bite was very specific. I had to be swimming and or ripping it over, around, or through those grass mats.”

But Daniel Balaba had plans of his own for Trail III. As the late fish were posted, Balaba took the top spot from Rassmussen, who finished second. Balaba’s 3rd, 2nd and 1st place finishes had taken the AOY leaderboard by storm: he was now in 1st place overall. Additionally, Rassmussen’s 8th, 5th and 2nd place finishes had placed him in 12th place overall, and the two anglers now exerted pressure on the field from both ends of the frame. 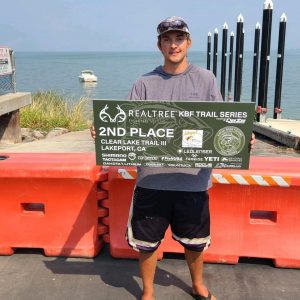 Rasmussen described the feeling as follows: “It was an epic weekend to say the least. To be able to just show up from Utah, pre fish for only a couple days, and do as well as I did was awesome. Seeing that I’m now in 12th place for AOY is icing on the cake after such an amazing trip.”

To see the FARWIDE KBF Angler of the Year standings, click here: https://app.fishingchaos.com/club/kbf/tournament-series/v1SixoE580OsCULMkKZr