KBF Challenges provide KBF Members opportunities to compete in places and times most convenient to them. They are catch-photo-release (CPR) online competitions using TourneyX and are organized at either the State or Regional level. KBF State Challenges run twenty-one (21) days. KBF Regional Challenges are typically of shorter duration—two, three or four days.

In 2019 KBF began rolling KBF State Challenges based on local weather and state regulations. Weather patterns and open seasons were considered in establishing the first month of competition for each state or province. Those with relatively warm winter months that permit year-round fishing will begin in January. Moving northward, the states will see events posted on TourneyX beginning in March, April, May and June. If five or more KBF Members in a state commit to compete in a month earlier than shown on this page’s roll-out map, notify the Series Director and KBF will set up that event.

NEWS: Challenges Now a Pathway to Dee Zee KBF The TEN: The Fish USA KBF Challenge Series Angler of the Year will now be numbered among the top anglers who make up the roster for Dee Zee The TEN, one of the kayak fishing communities highest-profile events. If the Challenge Series AOY is not already among the nation’s top ten KBF AOY Points leaders, then that will increase the field by one, making The TEN eleven. Another could be added through the All-American Kayak Classic, an event that brings together five top anglers from kayak bass fishing clubs across the nation. Finally, one more KBF Member can win his way into The TEN by winning the Dee Zee KBF TENvitational, which is combined with a KBF TRAIL Series tournament in late January, 2021.

Prerequisites: KBF Membership (Competitor, AmBASSador, or Lifetime) is required to compete in KBF Challenges and be eligible for KBF Challenge Points. KBF Membership dues must be paid no later than 12:00 a.m. Central Time (not necessarily local time zone) of the first day of competition for a registrant to be eligible for prizes and awards. Non-members who register and compete will be contacted and offered an opportunity to pay their KBF dues or receive a refund for their Entry Fee.

One Night Stand Regional Challenges: KBF’s One Night Stand is a 2-fish Catch-Photo-Release (CPR) tournament powered by TourneyX. Competition is against others in the five Challenge Regions (Northeast, Southeast, Central, FL/TX, and West). There is no limit to the number of bass photos Competitors may submit during Competition Period. Regardless of the number of photos submitted, only the two highest-scoring photos (based on bass length) submitted by a Competitor throughout the 14 hours of competition will post to his score and will determine the final ranking.

Due to the number of requests from anglers unable to fish on Friday nights, KBF allows anglers to choose either Friday night or Saturday night, but not both.

Sign up at TourneyX by the registration deadline (3PM in the predominent time zone for the region) on Friday for the night you choose to compete. Those who choose to compete during the 14-hour period beginning Friday evening may not withdraw after competition start time and switch to Saturday. Once competition has started on Friday night, they are committed. Otherwise, an angler might fish for a while Friday evening and, faced with poor results or foul weather, decide to hang it up and try again Saturday. That would give the anglers free to fish Friday evening a better chance of winning than those who may only fish Saturday. So, for each angler, it really is a one-night stand…not two. Opportunities for Group 1 on Friday night and Group 2 on Saturday night are as equal as we can make them.

Other Regional Challenges: Each month from April through October, KBF runs a 3- or 4-day weekend Challenge, usually coinciding with a national holiday, observance, or event (e.g., Spring, Mother’s Day, Father’s Day, Independence Day, Dog Days, Back to School[ing Bass], Columbus Day). Competition is against others in the five Challenge Regions (Northeast, Southeast, Central, FL/TX, and West). These are 5-bass Challenges that run from 12AM on the first day until 11:59PM on the final day. Registration cut-off is 12AM on the first day of competition.

Registration: Event registration deadline is 12:00 a.m. on the first day of competition, for State Challenes, in the time zone set for each event. For example, If one wishes to compete in the May Virginia KBF State Challenge, which is in the Eastern Time Zone, then he must register by May 1 at 12:00 a.m. EDT. No registrations are permitted once competition has begun.

Don’t rely on your lake-time, but go by the time zones laid out above. For example, East Tennessee is in Eastern Time Zone and the rest of the state in Central. The Tennessee KBF State Challenge is set up for Central Time Zone. Indiana uses multiple time zones but Eastern Time Zone is designated for state events. Arizona has regions on Pacific Time and others on Mountain Time, but  only one—Mountain Time—is used in setting up events for the entire state. The Southeast Region encompasses states in both Eastern and Central Time Zones and uses Eastern Time for its schedule. Competitors must be aware of this and adjust accordingly so as to not start or end an hour early or late.

All 2020 KBF Challenges will be run using the TourneyX Tournament Management System. Get started by creating a free TourneyX account. One may use a web browser on a computer or mobile device to register for an event by opening the Event Page (using the search function or jump to KBF Tournaments). Or, one may download the free TourneyX app for Apple or for Android devices and register in the app.

Minimum Registration Threshold (MRT): KBF Regional Challenges with fewer than five (5) registrants will cancelled. If KBF anticipates that fewer than five will register in a state for a KBF State Challenge, usually because the state has fewer than 10 KBF Members, then that state may be merged with a bordering state prior to posting of the events. Usually mergers are between states having similar black bass characteristics. If the combined number is still less than five, then multiple states may be selected for merger. Once merged, states remain so for the rest of the 2020 season unless a waiver is granted by the Series Director.

Entry Fee: $35 per Challenge. This includes both the Challenge and Big Bass competition. $5 covers TourneyX charges. $1.31 is retained by PayPal. $7.50 is held back for the KBF Challenge Series Championship prize pot. KBF retains $1.50 to cover  adminstrative costs (planning, organization, staffing, promotion, officiating), so the remaining $19.69 from each registration goes into the pot that is distributed as event cash prizes (big bass and rank).

Refund requests must be received before competition start time; requests for refunds after competition has started will be denied. An administrative fee is charged for requests received after the date stated in the KBF Event Page.

If a KBF Member has already qualified by winning, or by rank in either state/province or region, qualifying position do not roll down.

State Challenge Points Leaders will be recognized for each state and province. Trophies will be presented at the Night of Champions, Thursday night, October 8 at Guntersville, Alabama. 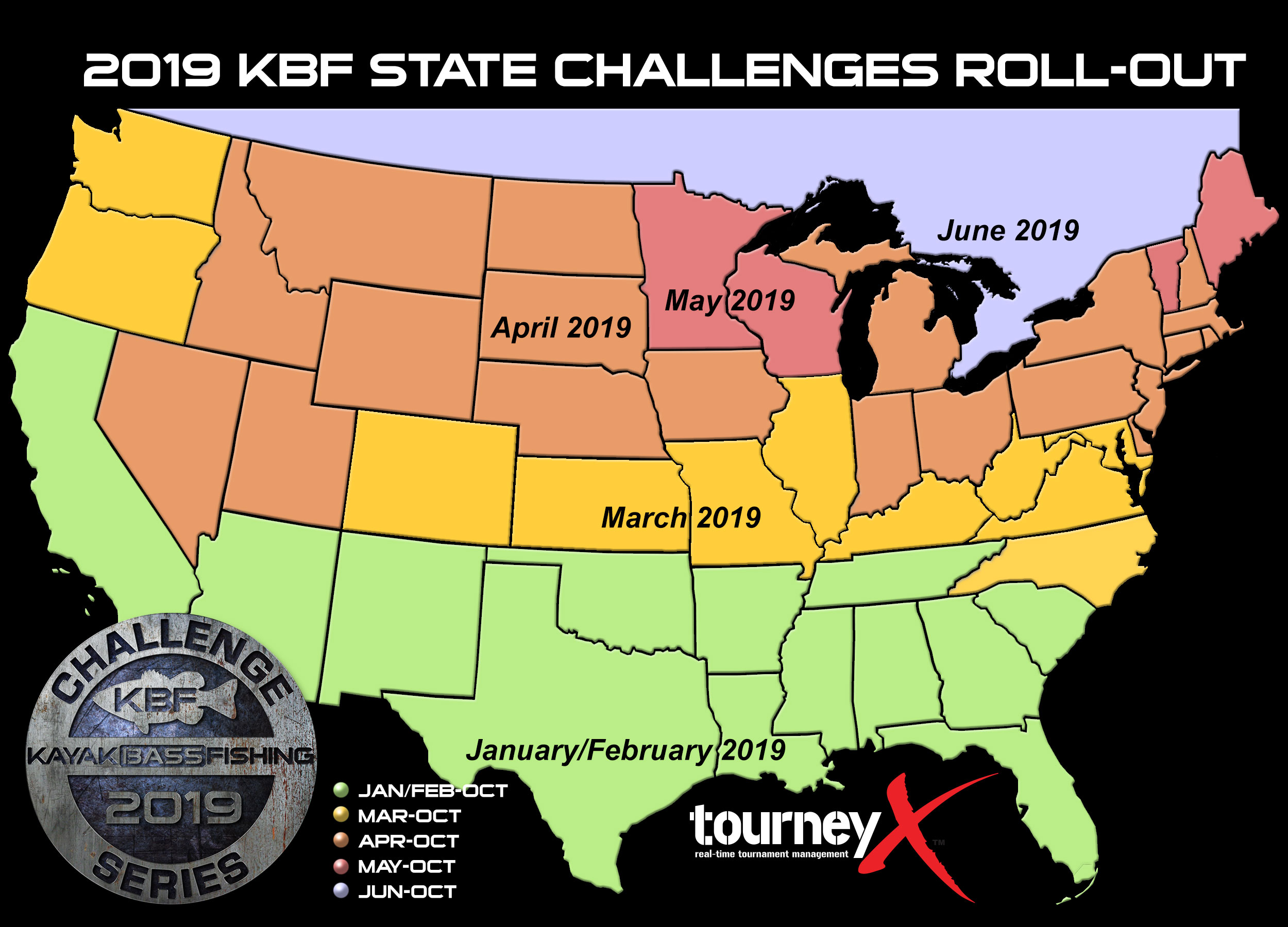