KBF scheduled two double-headers, with simultaneous tournament events in different regions of the country, to provide anglers opportunity to maximize their late-season chances.

On June 25-26, KBF competitors converged on lakes in California and Tennessee in the first of those double headers. The weekend action began on Percy Priest Lake, a short distance east of Nashville, TN, and ended on Pacific Time at Lower Otay reservoir in San Diego County.

With clear skies and low water levels, most would have expected a tough day of fishing in southern California, but KBF competitors found the bites and made them count. In the end, some new names topped the Farwide KBF leaderboard on the west coast and the good fishing resulted in close finishes and some big fish on Lower Otay reservoir this weekend. One angler, Dominic Doan, even recovered from a nearly ruinous error with his tournament ID tag on his way to victory.

The story of KBF’s west coast season has been that of the rise of exciting young anglers on the national scene. Caymen Rasmussen, Cody Henley, Gilbert Garcia and others had been travelling hard and fishing harder, resulting in multiple wins for some of them and strong standing in the various KBF points races. At Lower Otay, some experienced kayak anglers reasserted themselves, and it began on Saturday with Mark Christman’s victory at Trail I.

Christman has long been active in the California kayak tournament scene and as President of the popular SoCal kayak Anglers. He’d finished in second and third at previous KBF Trail events, but never got a win. But on Saturday, he found the bigger bites to edge his closest competitor, Chris Harris, by a .25” margin to win the KBF Trail champion’s trophy. Along the way, Dominic Doan stacked a fifth place finish, and was in second place heading into the weekend final of the KBF Pro Series on Sunday, slightly off the pace set by Chris Harris.

Christman won by working a very shallow bite later in the day. In his words:

“ I know Otay well. Back in 2018 I fished it a lot and was California AOY, but I hadn’t fished it much lately. I pre-fished the Sunday before the tournament and the lake level was lower than I had ever seen it. My bites came on a frog, a Senko and an underspin, so I went into the tournament with those.

“I picked a location that wasn’t as heavily pressured. I started on weeds and caught them in about 10 feet of water on the underspin and had some frog bites. I moved shallow later and fished floating mats in 2 feet of water, and got a limit. I moved again to fish a patch I hadn’t fished in about a year. I landed two 19” bass off that, nine minutes apart. They were between the mat and the wall, and I caught them on a 6” Senko. Most anglers here fish a 5” Senko, so I catch fewer fish on the lure but they tend to be better fish.”

Caymen Rasmussen started Sunday’s KBF Trail with an early limit, and was in first place after one quarter of competition time. Not far behind him was Dominic Doan, in third place, with his eyes set on the KBF pro Series trophy. While Rasmussen faded over the course of the day (he would finish 6th in Trail II) he would make a run at the Pro Series trophy too, ultimately finishing in fifth place overall.

The competition for the Pro Series trophy was hard fought and close. In the end, the top three were separated by only 1.5”, but Doan kept grinding out bites and culls as the day wore on. He would finish in third place in the Pro Series on Day 2, but combined with his second place finish on Saturday, he took home the hardware.

“Saturday started out great with my second cast landing a 16” right away on a bluegill colored fluke on steep bank with grass. That pattern fell short and had to abandon it after giving it a few hours. [In the] remaining hours I focused on 20-33 feet of water with either weed edges, brush, or rock piles. My biggest fish at 18” came off of vertical structure in 22 feet on a drop shot rigged with a 4.5” Roboworm.”

“Day 2 was a roller coaster. In short, I caught six fish early within the first hour and had no idea I had the wrong identifier on. All my fish denied. I was emotionally wrecked. My new start time was 11am after my mistake. I went to work. First grass mat, I pitched the same straight tail worm…and immediately hooked. That small grass mat produced 15 bass at 80”. I destroyed that area and knew it didn’t have anymore size on it. With 2 hours to go, I knew I had to run piles deep for those bigger momma bass. First 15 minutes, I caught a 16.75 to cull for 81.5”. Unofficially jumped from 3rd to 1st with that fish.

I want to thank the universe and my partner for this accomplishment. Also, big shoutout to KBF for coming to the West Coast and creating opportunities out here for passionate kayak fisherman such as Cody Henley, Cayman R., Anthony Garcia, Shane LemMon, and many more. Lastly, I want to thank Motorguide for holding me in position off shore.”

In the meantime, the Sunday KBF Trail II leaderboard looked much different from Saturday’s. In the final tally, only 4 of Sunday’s top 10 anglers (Rasmussen, Doan, Engel and Steve Buechner) had finished in the top 10 on the previous day. Buechner was one of them, but he knew he would need a late upgrade. He had been in first place near the end of Saturday’s event, and was passed by Christman.

“Lower Otay is only open on Saturdays, Sundays and Wednesdays, so I prefished half days on Sunday and Wednesday The lake is low and clear, and I noticed fish travelling in the channels between weed beds. That’s where I focused. 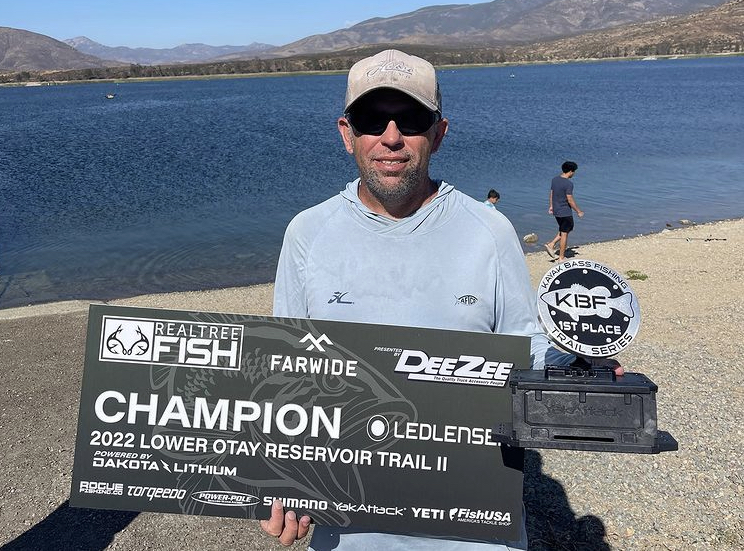 “On Saturday I threw a drop shot, a weightless Senko and a jerk bait. At the end of the day I was trying to cull a 14” and I was passed in the standings because I didn’t cull. I decided then that I was going to live or die by the Senko, and I was going to cover more water. On Sunday, I circled nearly the entire lake, twice.

“I was throwing a 5” green Pumpkin Senko, rigged weightless, Texas rigged or wacky. I would use that wacky rig on the edge of the weeds, where there was a wall with shade. I got my last cull right at the end, too. I had 85” and I knew I would need an upgrade, because of what happened the day before. I landed a 19.5” to get me to 88.25” and that Senko strategy gave me the win.”

Up next: The Realtree Fishing KBF TRAIL & Pro Series will resume on July 16-17 at Erie/St. Clair.

Steve Buechner is sponsored by Fastlane Kayaking and Heck Electric and Solar. He is a member of the Hobie Fishing team.

Mark Christman is sponsored by his wife and daughter.