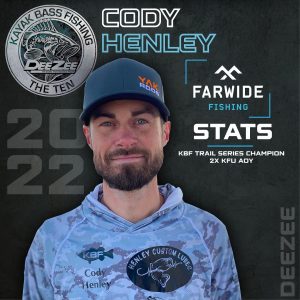 When Cody Henley started stacking points on the 2021 KBF TRAIL, he went on a surge that started over a few days of competition in California. The surge turned into a wave that he rode into the 2021 KBF National Championship, and it continued from there until it crested at Kissimmee this past weekend, crashing over DE ZEE KBF THE TEN.

Henley kept riding that wave into Kissimmee, Florida, all the way from Utah. On the first weekend of competition in the 2022 KBF TRAIL Series, Henley won Day 2 of the Realtree Fishing KBF TRAIL against over 150 anglers. And after battling fierce conditions and a large field, he turned to fish against the top kayak anglers in the sport for two consecutive days at DEE ZEE KBF THE TEN.

When it was over, he was the 6th ever champion of  DEE ZEE KBF THE TEN.

The 2022 edition of DEE ZEE KBF THE TEN began with improved fishing conditions and ended with a tremendous act of integrity and sportsmanship.

Cody Milton, Rus Snyders and Jody Queen had all won DEE ZEE KBF THE TEN in previous years (for a complete list of winners, scroll to the bottom of the article), and they led a field of twelve of the sport’s top sticks onto the water.

Soon thereafter, Florida bass then began showing up on the Ledlenser leaderboard as anglers figured out the bite. Tennessee’s Jimmy Mcclurkan took the early lead with 3 good fish that measured over 50”. By noon, however, Cody Henley had posted an 87.25” limit to take the lead, followed by Jody Queen and Josh Stewart.

But Jody Queen had gone back to his truck to add some layers to his clothes. When Queen returned to fishing, he realized he had left his PFD in his truck. And then he did something that typifies the high standards of integrity that are represented across the kayak fishing community: he called the tournament director and disqualified himself from competition. When Chad Hoover discussed the incident and thanked Queen for his honesty at the awards ceremony broadcast (see link below), Hoover noted that “In the military, they say integrity is doing the right thing when nobody is looking.” Queen, who is a U.S. Army veteran, embodied that phrase on the water at Kissimmee.

In the meantime, Henley was making adjustments on the water. It all began with the experience he had gained fishing the KBF TRAIL on the previous weekend. In his words:

“On Day 1 of the KBF TRAIL, I had no plan. I was gonna go to Lake Marion, but it was too crowded. So I switched to east Toho, and was blown off within 45 minutes. I couldn’t keep my kayak straight. I got my head together, left and went to the north side of Toho. I caught a limit of about 78” there on a golden shiner chatterbait.

“On Day 2 of the KBF TRAIL, I knew I had to swing for the fences. But the water temperature had dropped, but after a few casts, I started catching fish. I caught a 14” and another, and an 18”, and then an even bigger one. So I buckled down and tried to get rid of those two 14” fish. And I won the Trail, and took second place in the Tenvitational and the Pro Series.”

“Going into the TEN, we had a day off, and I was nervous. I wasn’t sure if Toho would hold up. When I launched on DAY 1 of the TEN, I went back to Toho. Instead of running down a channel along the reeds, I began fishing docks, and targeted those with lily pads. I found a pattern, fishing back and forth along a 3 mile-long stretch.  I spent the last hour or so of Day 1 motoring and looking around, because I decided I would come back on Day 2.”

Henley would finish Day 1 in 1st overall. Indiana’s Mike Elsea finished in 2nd place, while 2021 Rogue Fishing Co. KBF ROY Brandon Bissell held the 3rd spot. Mcclurkan finished in 4th overall on Day 1, 6.25” behind the overall leader Cody Henley. Another Tennessee angler, Josh Stewart, rounded out the top 5 after day 1. The tournament had set up in such a way that half the field had a plausible chance to win it all on Day 2, and given the good but somewhat scattered bite, nobody could be entirely ruled out.

Day 2 began as Day 1 had, with Jimmy Mcclurkan leaving the gat with a strong lead. Roughly two hours into competition time, Mcclurkan had posted a limit of 75.5”, and no other angler had yet posted more than three fish. As the morning wore on, Garret Wade posted a limit of 75.25” to vault into the third, but just as he had done on Day 1, Henley had power fished his way back into the lead. Shortly before the halfway point of competition, Henley had an 86” limit, and had taken a commanding lead in the overall standings. It was a lead he would not relinquish.

“Day 2 started a bit slow for me. I got on edge, and started praying, and every time I prayed I caught a fish. I caught about 30 fish overall, as the wind was blowing bait into the reeds. I started fishing faster, and covering more water. I found a few more things, and had a limit by 10 am, but I needed upgrades. My motor got clogged, I cleared it and I started fishing. I caught an 18” plus, and started working my previous spots.”

“I was nervous when I left the water. I was worried about how Mike Elsea was doing, and I knew he had gone to a new lake. I also knew Jimmy was nearby and had a decent limit. I was terrified. I had mixed emotions and cried a few times, and I prayed. I knew I would be grateful, win or lose, for the opportunity to be at the TEN House.”

Henley won’t be resting long on his laurels: his 2022 tournament fishing schedule is packed with commitments:

“I plan to fish to fish the KBF TRAIL and also the other Trails, including B.A.S.S. this weekend and then Hobie. I’ll then head back home to Kamas, Utah to get ready for the KBF TRAIL events out west. I am looking forward to Clear Lake (CA) the most, but I have fished Roosevelt Lake (AZ), too.  I hope to do this full time this season, while I keep manufacturing plastics at Henley Custom Lures.”

The Final Standings at DEE ZEE KBF THE TEN 2022

The history of DEE ZEE KBF THE TEN is a who’s who of our sport. To qualify for it shows you are one of the best, to repeatedly qualify demonstrates outstanding consistency, and to win the event engraves your name on an exclusive monument. Simply put, there is no single event that is more exclusive or prestigious in the entirety of kayak fishing.

In 2020, THE TEN was won by Rus Snyders, followed by Ken Wood, Derek Brundle, Cody Milton and Brad Case.