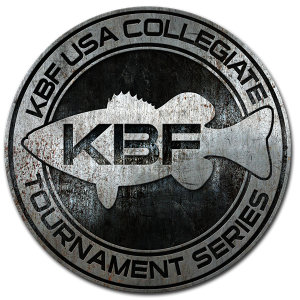 The Collegiate Kayak Bass Fishing Team Series provides college kayak anglers opportunities to compete against teams from other schools on a regional and national setting.

Kayak angling is ideal for college anglers. Even a kayak fully rigged for competition costs much less than a jon boat, motor and trailer, and it’s a fraction of the cost for a bass boat. Maintenance time and expense are almost nil. Schools can buy an entire fleet of loaner kayaks for the cost of a single bass boat. On- or off-campus parking, security, and storage pose few challenges, either. Preparation for practice fishing is a breeze by comparison, too; just portage your kayak and gear to a nearby pond, or toss your gear into a vehicle, strap a kayak on top, and go. Fuel and annual maintenance costs go way down. When traveling, competitors don’t limit themselves to hotels with room to maneuver and electrical hook-ups for bass boats in parking lots.

KBF uses online tournament management systems for CPR (catch, photo, release) competition. Individuals and teams may compete without the necessity of meeting face-to-face for pre-tournament briefings and weigh-ins. In Challenges (on-line events) and Tournaments (meet-up events), competitors may launch, fish, and submit fish for scoring throughout the day. Results are instantly visible on automatically-updated TourneyX Leader Boards. Kayak fishing preserves fishery resources, too. The mortality rate of fish caught in competition approaches zero (where it’s as high as 80% in conventional bass tournaments using livewells and end-of-competition weigh-ins). Anglers have many more choices on where, when, and how to fish. Entry fees and prize distributions are facilitated by PayPal, though having a PayPal account is not mandatory.

Throughout 2017, KBF Collegiate Members hone their skills in competition against one another in their own clubs and against other Collegiate teams in the KBF Collegiate Challenge Series. The rules for each event spell out the start and end dates and times, eligible waters, and other conditions, but otherwise competitors can choose where, when, and how to fish. This takes the headache out of meshing competition and class schedules.

Lower costs and greater participation result in reduced travel time and expense, too, compared to conventional bass tournaments. Three times in the during 2017, five-person teams from schools across the US converge to regional fishing hotspots for KBF Collegiate Series Regional Team Tournaments. For example, teams from University of Memphis or Rhodes might meet with their counterparts from East Tennessee State University in Johnson City, UT Chattanooga, and two dozen other Tennessee colleges to fish Old Hickory Lake near Nashville one weekend. Or teams from schools along the Gulf coast might meet to fish the Tensaw and Mobile Rvers flowing into Mobile Bay. Intra-state and cross-border rivalries can add spice to the mix. All the Challenges and Tournaments culminate in the KBF Collegiate National Championship in March, 2018. Members of the winning team will be invited to compete the following day in the biggest tournament in kayak fishing, the 2018 KBF National Championship. And if one of them triumphs there, that will lead to a berth on the US Team in the 2018 KBF World Championship as well.

For college students, KBF Membership dues are cut 50%, from $50 to $25. They are eligible for all the perks and discounts enjoyed by KBF Members. As KBF Members, they may compete against anglers of all ages and states through other KBF member-only and OPEN tournaments.They are eligible to qualify on their own for slots at the KBF National Championship and are eligible to earn KBF Angler of the Year Points.

We’re consulting with college team coaches, KBF members in universities, and other advisors now. Complete guidelines for college teams and a full program descriptions will be coming soon.

Get started now and be ready to compete in 2017 by organizing and registering your team:

If you want to be sure you’re on our radar but haven’t gotten you team together or have other questions, feel free to email Chad Hoover at kayakbassfishing@gmail.com.