Fishing for Data, Part I: Mapping Your Catches

An idea popped into my head while dragging a ned rig around on a slow day. I wondered how many big bass I had caught from this lake and if there were any locational patterns to those catches. As anglers we remember generally where we’ve caught most of the really big ones, but after a while a lot of those memories will fade. Then all we are left with generalities and guesses. If you have the data, there is no need to remember the specifics.

Since I have taken a photo or two of every big bass and most likely 95% of all bass, I had the data. If I could find a way gather this data and lay it out on a map, then it might be possible to find a pattern in these datapoints. In this article, I discuss collecting the data, and in part 2 I discuss how to analyze it.

In order to formulate the data, there has to be a defined data set. The question becomes what is a big bass?  I would need to draw a line somewhere. My home lake has an 18” minimum, so that would be my minimum. My data set would be any bass caught that measured 18” or more.

The next step was to find a tool that would export the GPS data from the EXIF data on the photos. I did a little searching and found the EXIFtool – https://exiftool.org/. I also found a video explaining how to use it. Here is that link – https://www.youtube.com/watch?v=S6v-Cg0fQbQ

I use Dropbox to sync my photos to my computer and at the end of each year I sweep those photos into a folder for that year. Pulling this data would be pretty simple. I created a temporary folder in the Year folder (18Plus). Then I copied a photo from each of the 18″ and over catches into that folder. I moved that folder into my computer’s temp folder.

Now it’s time to run the command to extract the data.  After running the command, I looked at the file to make sure each line had the GPS data that I was looking for.  Sometimes the data doesn’t get collected.  Since I take multiple photos, if one is missing hopefully there is another photo that has the data to use. Just run the command again to get the last bit of data.  I repeated the process for each year of photos. Here is the command I used. Change the command to reflect your folders and the specific year:

With the data collected into CSV files, the next step is to create a map. 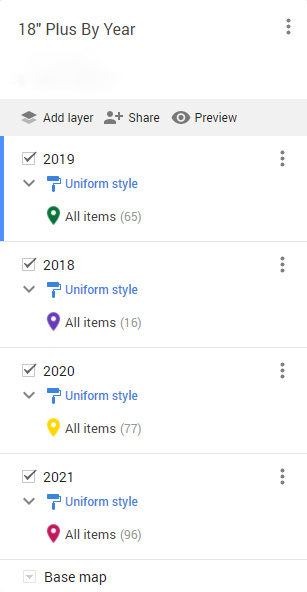 I headed over to the Google map site I use and created a new map. This feature is private unless you share it to someone. I added a layer for each year and color coded each of them differently (see image on the right). I did this so I could tell the difference from year to year and so that I could turn off a year if I didn’t want to see it:

Each new layer has an Import feature. I just needed to click on Import and then dropped the annual export file onto the box. The import feature asked me to map the import fields Longitude and Latitude with the GPSLongitude and GPSLatitude fields. It also asked me to choose data for a label and I chose the filename. After that the data points showed up.  I repeated the process for each year. As you can see, the color coded years in the graphic to the upper right show up as colored pins below: 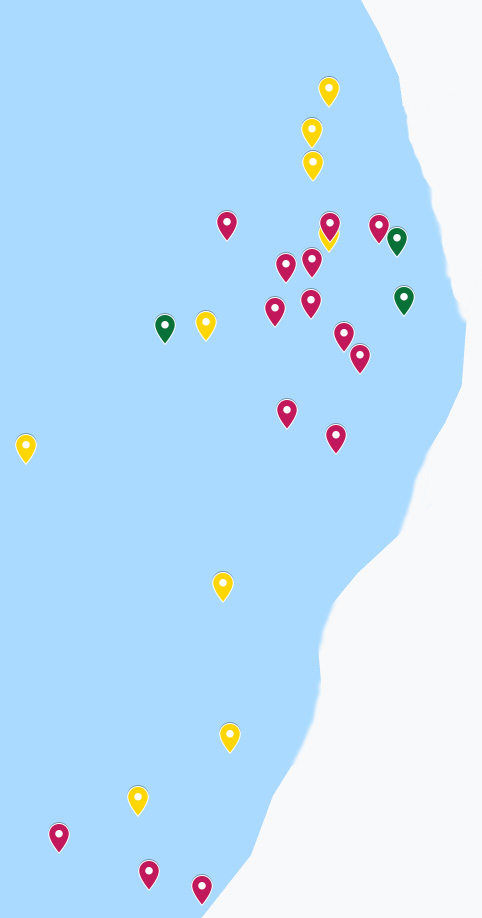 I have learned a few things along the way.

A question comes to mind.  Why not use an app?  The simplest answer is, you can and I tried to use one.  The problem is the import feature of said app didn’t want to work to import my previous photos.  Also, there would still need to be some manual manipulation of the photos since there are so many.  There is also the fact of entering in the data that the app wouldn’t know, such as size of the fish.  It’s all about how you want to spend your time. Soon enough we will have advanced intelligence on our cell phones that will be able to collect all this data automatically, but for now my personal choice is just to sit down at the computer.

This data can be used as a tool to help us learn to focus our efforts. We might reinvest in certain areas that worked in the past. Or we might find other areas on this lake or other lakes that would potentially have similar traits. Locating the spots where the bigger fish tend to get caught is just the first step. Now we must figure out why those big bass have been caught in higher concentrations in these specific areas.  Hmm, it might be helpful to have some other data in order to help achieve that goal, data such as the date, time, lure, weather, moon phase, etc.

Note: In part 2 of this article series, I dig deeper into the big fish of 2021 by looking at data other than location.

About the author: Matt Kiefer is a long time KBF member and an accomplished tournament angler from Indiana. In 2021, he was SIYAK Angler of the Year. Matt fishes from a Jackson Kayaks Big Rig. Matt was previously featured in Kayak Bass Fishing in 2020.