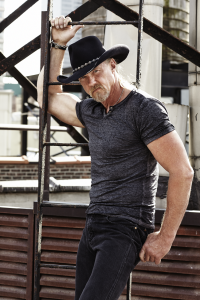 HOT SPRINGS, Ark. (May 29, 2019) – Before any professional anglers have even made a cast in Lake Hamilton, Fishing League Worldwide (FLW) has already landed a lunker. Country music superstar Trace Adkins is set to bring his fiery and memorable live performance to the 2019 FLW Cup, performing a free concert on the weigh-in stage at Bank OZK Arena in Hot Springs, Arkansas, on Sunday, Aug. 11 beginning at 4 p.m. Adkins will take the stage before the world’s premier bass anglers weigh their final-day limits at the event – professional bass fishing’s world championship. Fans of all ages are encouraged to attend the free concert, which is presented by Realtree and KSSN 96.

A Nashville icon for more than two decades, Adkins has made his mark on the country-music industry with 11 million albums sold, time-honored hit singles, GRAMMY nominations, and CMT and ACM awards to name a few of his accomplishments. His videos have nearly 200 million plays on YouTube, and he’s even had movie and TV roles come his way. But ask Adkins what’s left to prove in his career, and the small-town Louisiana native says it’s simple: “The itch remains. To create. To collaborate. To continually feel the excitement that comes after whipping up a new song out of thin air and laying it down to tape.”

It’s an interesting change of perspective for Adkins, however, when he hits the road for his now legendary live gigs. Where the studio offers him unique insight into his current state of mind, onstage, when revisiting his classic songs like “You’re Gonna Miss This” or “Every Light in the House” nearly every evening, he says he’s taken back, if only for a brief while, to earlier moments in his life.

“It’s hard to describe, I gotta be honest,” Adkins says of being overcome with emotion and reflection when trotting out some of his time-tested cuts for adoring audiences. “I’ve gotten to the point now where I’ll be onstage singing ‘Every Light In The House Is On,’ and I look down at the crowd and realize that person right there wasn’t even alive when I recorded that song,” he laughs. “To watch their face go, ‘Oh, that’s a cool hook,’ it’s like Oh my god, that’s the first time that person every heard that song!”

With 1 million followers on Spotify and more than 1 billion spins on Pandora (10 million spins per month), the longstanding country icon has yet to lose any of his trademark passion and killer instinct for his craft.

“We are ecstatic to welcome Trace Adkins to the 2019 FLW Cup stage in Hot Springs, Arkansas,” said Kelly Oettinger, FLW Vice President of Marketing. “Trace is a superstar in the world of country music, and we are honored to have him perform. We have a longstanding tradition of providing the absolute best tournament experiences for millions of FLW fishing fans across the country and around the world. Having Trace perform at the crown jewel of professional bass fishing is a perfect fit to continue that tradition.”

In the meantime, Adkins is going to keep doing what he knows and loves. Performing. Creating. Inspiring. He adores it. And, he adds, he knows so many of his lifelong fans, and new ones to boot, do too.

“I’m gonna go out there and find those people,” he says with a laugh. “I’m gonna bring a band and turn it up real loud! And we’re gonna have a good time!”

The FLW Cup, the world championship of bass fishing, returns to Hot Springs and Lake Hamilton, August 9-11 with a $300,000 top prize on the line as well as the title of world’s best bass angler. This year’s championship tournament will feature 52 of the best anglers from across four FLW tournament circuits and is being hosted by the Arkansas Department of Parks and Tourism and Visit Hot Springs. It will also feature the inaugural Dee Zee FLW/KBF Cup presented by YakAttack for the world’s top kayak anglers and The Bass Federation Junior World Championship for top young anglers from across the country.

About FLW
FLW is the world’s largest tournament-fishing organization, providing anglers of all skill levels the opportunity to compete for millions in prize money in 2019 across five tournament circuits. Headquartered in Benton, Kentucky, with offices in Minneapolis, FLW and their partners conduct more than 290 bass-fishing tournaments annually around the world, including the United States, Canada, China, Italy, South Korea, Mexico, Portugal, South Africa and Spain. FLW tournament fishing can be seen on the Emmy-nominated “FLW” television show while FLW Bass Fishing magazine delivers cutting-edge tips from top pros. For more information visit FLWFishing.com and follow FLW at Facebook, Twitter, Instagram and YouTube.