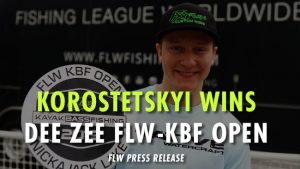 DAYTON, Tenn. – By just a slim 2-inch margin, 23-year-old Michigan angler Bogdan Korostetskyi, won the inaugural Dee Zee FLW/KBF Kayak Open at Nickajack Lake presented by YakAttack Sunday after catching a two-day total of 174.25 inches of bass. For his win, Korostetskyi earned $5,000 and added a $2,500 Dee Zee gift card for being the highest-finishing angler in the Dee Zee contingency program.

During practice, Korostetskyi, a college student in Michigan who was born in Ukraine, said he struggled to find a consistent bite anywhere but on the bank, but he didn’t want to focus his tournament where he was afraid most of the 103 anglers in the field would be fishing. Eventually, he tracked down a couple of grassy offshore humps. [Read more] 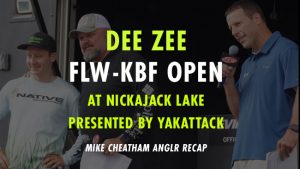 The inaugural Dee Zee KBF/FLW professional kayak bass fishing tournament presented by YakAttack was held on Nickajack Lake in Tennessee on May 3-4th. 103 anglers representing 23 states launched at various points between Chickamauga Dam and Nickajack Dam hoping to win, or at least qualify for the KBF/FLW pairing at the Forest Wood Cup to be held in Arkansas on August 9-11th.

The top twenty anglers not only qualified, but had their tournament fees waived for the upcoming event.

Chad Hoover, the man behind KBF, brought the event together in conjunction with an FLW tournament held on Chickamauga. It was the culmination of a vision, lots of hard work and the determination of Chad and his team; allowing kayakers to appear on a larger stage than ever before, reaching a much wider audience. It was the first time many of the anglers had been exposed to a professional tournament and the crowd that comes to see the weigh-ins. {Read more]

The two events will be held in conjunction with FLW Tour events – the FLW Tour at Lake Chickamauga and the FLW Cup at Lake Hamilton – on nearby fisheries to offer kayak anglers and tour pros separate fisheries for competition. KBF will manage operation of the two events, and the winners will be recognized on the FLW Tour stage and featured in FLW’s media outlets.

“Kayak fishing has become incredibly popular in recent years and continues to grow,” said Dave Washburn, FLW Vice President of Operations. “We are excited to work with KBF as the kayak-fishing community leader to elevate the sport to new highs with tournaments offering over 100 percent payouts through the course of the season and the biggest media platform available to kayak anglers.”

The first event, the FLW/KBF Open, will be hosted by Fish Dayton and Fish Lake Chickamauga May 4-5, 2019, on Nickajack Lake. Entry fee for the event is $200 per kayak, and the top 100 anglers will qualify to compete in the second event, the FLW/KBF Cup in Hot Springs, Arkansas. Of these 100 qualifiers, the top 20 receive free entry. All other qualifiers pay a $500 entry fee. The FLW/KBF Cup will be held Aug. 8-10, 2019 (kayak competition August 8–9 only), on a lake to be announced in conjunction with the Aug 9-11 FLW Cup on Lake Hamilton.

“We are excited to partner with FLW to take competitive kayak fishing to the next level and offer better exposure to our top anglers and their accomplishments,” said Chad Hoover, KBF President.

KBF was formed in 2009 to offer kayak anglers the opportunity to compete for hundreds of thousands of dollars in cash and prizes at premier fisheries around the country. Currently in its seventh season for live events, KBF offers more than 25 professional-level bass-fishing tournaments to kayak anglers. For complete KBF details, schedules and updated information, visit KayakBassFishing.com.

About FLW
FLW is the world’s largest tournament-fishing organization, providing anglers of all skill levels the opportunity to compete for millions in prize money in 2019 across five tournament circuits. Headquartered in Benton, Kentucky, with offices in Minneapolis, FLW and their partners conduct more than 290 bass-fishing tournaments annually around the world, including the United States, Canada, China, Italy, South Korea, Mexico, Portugal, South Africa and Spain. FLW tournament fishing can be seen on the Emmy-nominated “FLW” television show while FLW Bass Fishing magazine delivers cutting-edge tips from top pros. For more information visit FLWFishing.com and follow FLW at Facebook, Twitter, Instagram and YouTube.