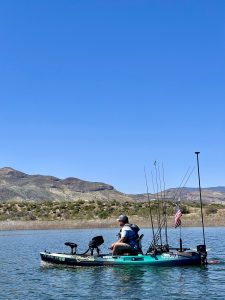 The Realtree Fishing KBF TRAIL and KBF Pro Series presented by Dee Zee and Powered by Dakota Lithium expanded its West Coast itinerary to five event weekends in 2022. The 2021 season saw exciting new names like Caymen Rasmussen, Daniel Balaba and Dee Zee THE TEN champion Cody Henley emerge from KBF’s western ranks. In 2022, Utah’s Chris Spencer has staked an early claim in the Farwide Angler of the Year race. In short, the West Coast has been making noise and Roosevelt Lake was set to hear it.

Rasmussen, Spencer and Henley would have strong weekends on Roosevelt, but the victories belonged to Anthony Garcia and Quinlan Benavidez, who focused on rocky areas to generate bites. For one of them, victory was an early birthday gift. Each angler explains his approach to unlocking Roosevelt below…..

Conditions were clear and warm as anglers launched at Roosevelt Lake, AZ, with forecast temperatures in the 80’s. Located north of Phoenix, AZ, and part of the Salt River system, Roosevelt is the largest lake that is entirely within the state’s borders. The lake’s Smallmouth and Largemouth Bass are subject to a slot limit, making Roosevelt a trophy fishery, and anglers would chase both species as they competed in the third event of the second weekend of KBF’s 2022 West Coat tournament schedule.

One of the main stories heading into the KBF Trail and Pro Series at Roosevelt lake was that of Chris Spencer. Spencer had swept the Trail events at Folsom Lake, CA in February, and established himself as the primary challenger to Jason Broach in the FARWIDE KBF Angler of the Year race. Spencer was in 4th place late in the day, but eventually fell to 14th overall in the Trail and 8th in the Pro Series as the fishing warmed up and more bags came in. He would recover on Sunday.

In the final hours of competition, the bite heated up, affecting both the Trail and Pro Series standings, as well as the Dakota Lithium Big Bass leaderboard. For example, mid-day leader Bradley Kuhlin had 74” and a 3.25” lead in 1st place. He would manage one small upgrade that kept him in the top 10, finishing 7th overall.

The Dakota Lithium Big Bass Leaderboard offered a great tournament-within-tournament competition. With just over two hours left to fish, Steve Swedler’s 20.25” bass held the top spot. As the water warmed at mid-day, however, the big fish started biting. Quinlan Benavidez posted a 21.25” Largemouth Bass with 2 hours left, and then Erin Mathis posted a 21.50” tank to take the top spot.

That flurry of late bags and big fish was accompanied by 6 anglers moving ahead of Kuhlin, the mid-day leader. Dee Zee KBF THE TEN champion Cody Henley was one of them, who upgraded to third place overall, with an average just under 16” per bass. Second place went to Bennet Shulkin with am 81.25” bag. None of the top 3 anglers posted a Smallmouth in their final limit, although Doug Roe, in 4th place, did.

The top spot belonged to Quinlan Benavidez, who outpaced the field by nearly 2” per fish. His 90.5” limit included the 21.25” anchor fish noted above, demonstrating that the late bite was the key on Roosevelt. Benavidez also held 1st place in the KBF PRO SERIES leading into day 2 of that event.

Benavidez described his approach to the lake:

“I’m pretty familiar with Roosevelt, and I regularly make the two hour drive. I pre-fished the lake on Saturday and found a good reaction bite running a red crankbait down rock walls. That bite died on Saturday, so I switched to fishing a Dobbins flipping jig in shallow water. The thing for me was to fish brush that was growing on a hard, rocky bottom.”

Benavidez won his first KBF TRAIL on Saturday, and was positioned to take the Pro Series tournament on Sunday, but conditions would demand adjustments…. 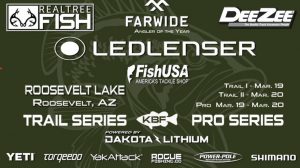 The second KBF TRAIL of the KBF season’s second west coast weekend began with slightly cooler temperatures on a clear morning with a light breeze. That breeze would turn into strong winds later in the day, forcing anglers to adjust. Early catches were few, as Kendall Tingey, Gilbert Garcia and Bryan Jensen posted fish in the first hour of competition. As with Saturday’s event, when the bigger bass were posted as the day warmed, it seemed Roosevelt Lake would generate comparable numbers to the previous day.

After one quarter of competition time, Mario Galaviz overtook Kendall Tingey for the early lead with 39.75”. Gilbert Garcia, who finished 9th overall on Saturday, followed them in  3rd place. As the event wore on, it seemed that the late bite and big Largemouth Bass would again determine the outcome. And it did.

Gilbert Garcia would remain in contention throughout the day, holding the lead in the Trail event and also the Pro Series with a 71.5” limit with one hour remaining in competition. Late bags and limits would begin to stream in and change the final standings. Gilbert Garcia upgraded to 74” before he was passed by Bryce Gibbs who posted 78.5” to move into 2nd place and Anthony Garcia, who posted 85.25” to take the overall lead. Caymen Rassmussen posted  76.25”, to take 3rd place, while Cody Henley took fifth overall.

Anthony Garcia held on for the win. As with Benavidez the day before, adjustments, and finding the right lake bottom to fish, were the key:

“ I pre fished on Friday. The bite was mediocre at best. I only found small fish, and Saturday was tough too. I realized I was fishing a little too fast, so I slowed down on Sunday. I caught a limit by 8 am but my signal was bad, and I kept fishing. I caught those fish on a Rapala DT-6. Roosevelt’s banks are covered in trees, so it’s a good flipping lake. But I focused on pea gravel and rocky areas. Later in the day, my last two culls were caught on a new Berkley Champ Craw that I fished on a ½ ounce jig.”

On the Pro Series side, Saturday Trail champion Quinlan Benavidez managed only 64” on Sunday, but it was just enough to win the event with 154.50” total. Bryce Gibbs, Cody Henley, Gilbert Garcia and Anthony Garcia rounded out the top 5 in the KBF Pro Series. Bryce Gibbs also made a run at the Dakota Lithium Big Bass leader board with a 21.50”, tying Erin Mathis’ fish for longest overall. Mathis would go on to win Big Bass for the event.

“It was a complete change. The winds were howling. I was able to pick off five keepers on a Missile Baits Quiver Worm. I knew if I caught a limit I had a chance, and it worked out.”

Benavidez wrapped up an outstanding weekend with a bow – he turned 18 years old the next day. Happy Birthday!

Quinlan Benavidez with his birthday gifts to himself. Photo Courtesy of Q Benavidez.

Cody Henley and Chris Spencer managed top 10 finishes at Roosevelt lake, helping them to keep pace with Jason Broach on the Ledlenser Pro Series leaderboard, where Broach holds a slim lead courtesy of his Kissimmee Pro Series victory. On the FARWIDE Angler of the Year leaderboard, which is for KBF TRAIL series points, Henley displaced Broach from 1st place, while Spencer remains in second place. Broach has dropped to 3rd place, and will have a chance  to regain ground at either the Shreveport KBF TRAIL (April 2-3) or on the Potomac River (April 9-10).

Anthony Garcia is on the Old Town Pro team. He is sponsored by Dakota Lithium, irod fishing, Simms Fishing, and Tackle Shack USA.

Looking ahead: The Realtree Fishing KBF TRAIL and PRO SERIES will visit Shreveport-Bossier City LA on April 2-3 and then the Potomac River on April 9-10.