Lake Champlain brings out the best in anglers. Its waters are deep and clear and loaded with fish, and when anglers name “bucket list” lakes, it is a perennial favorite. On June 11-12, 2022, Champlain hosted the Realtree Fishing KBF Trail and Pro Series presented by Dee Zee Truck Accessories and Powered by Dakota Lithium. It was, for many, an unforgettable weekend. For Drew Gregory, it was a landmark event and another chapter in a historic 2022 run.

Champlain did not just bring out the best in anglers. It brought out the best among the best. The tournament roster of KBF competition featured three former KBF National Champions (Matt Ball, Mike Elsea and Matthew Conant), a former KBF Rookie of the Year (Derek Brundle), a former Hobie BOS Tournament of Champions winner (Jody Queen) and enough KBF TRAIL and KBF Pro Series champions to fill a marina.

One of those anglers, however, had not yet won a major KBF event. Crescent Kayaks Pro Drew Gregory has finished in the money at big events on every national trail circuit. He is a former Hobie BOS Series Angler of the Year and a Bassmaster Kayak Series Open Champion. And in 2022 he has been on the sort of hot streak that comes along once every so often and has the kayak fishing industry buzzing with excitement.

That missing KBF victory was the only blank page in a book of legendary wins across the major kayak fishing tournament circuits. Drew Gregory had come close t KBF victory on several occasions, including losing a 1st place tie breaker to his Crescent Kayaks teammate Ken Morris in 2021 and placing second to Mike Elsea at the 2019 KBF National Championship in Shreveport, LA .

But a win on the KBF Trail still eluded Gregory. That is – until he came to Champlain this weekend.

Big limits came in fast and frequently during the early fishing in the KBF Trail I on Champlain. After 2 hours of competition, the top of the Ledlenser leaderboard was stacked with big fish. By 8 am, Jackson Kayak Pro Matt Ball had the lead with 92.75”. Ryan Matylewicz was right behind him with 92.25, and a host of other hammers were within striking distance. Two hours later, Nick Audi took the lead with a 94.75” bag, while Jake Angulas was in second with 94”. Ball in the meantime had culled, but was in third place with 93.25”.

Big fish began to show up on the Dakota Lithium Big bass leaderboard. Tyler Sweet’s 20.5” bass topped the board, followed by Jonathan Richardson’s 20.25”.

Enter Drew Gregory. With a 20.25” bruiser of a Champlain Smallie for his anchor fish, he jumped into 1st place with 95.75” He would remain there while the field shuffled behind him, with Angulas finishing in 2nd and Audi falling to third place by the end.

“I fished Champlain last year [2021] for the Hobie B.O.S. event and got second place. It was the same time of year so I figured fish would be doing more or less the same thing. But last year we only fished from the New York side. This year I fished both sides.”

“I had to pre-fish Vermont. I was looking for a good population of Smallmouth Bass because I felt a Smallmouth bite would win. I looked for a congregation of bigger fish in moving water. On a lake, fish could be anywhere – near a bridge or a ledge. It’s the same on a river. You also just have to trust your instincts, so I covered water.”

He later added: “ I don’t ever look at the size of the [competition] field. There are no asterisks to a win. I base my research on the lake and look at the data. So I looked at other events held there and converted weight to length, because I am up against the lake. There was a B.A.S.S. Nation boat event on Champlain and 19 lbs won it. I figured I would need something in the mid-to-high 90 inch range to win, so I was looking for that quality of fish…. But you know Smallmouth Bass, they get off the hook. They are magicians.”

With these criteria in mind, Gregory began Day I on the Vermont side of the lake:

“I uploaded three fish from my first spot. I went to my second spot, and I had a good signal so I kept fishing without worrying about uploading photos. If you have a history fishing on rivers, you know those fish aren’t just on the bank. The half mile or so that I fish had fish all through I, so I was fishing across the entire river. My Crescent Shoalie was great navigating it and that Ketch board recess in it helped me take quick, clear photos.

“I was fishing mostly with a 7’3” Fate V3 rod by 13 Fishing. It was rigged with a 13 Fishing Concept reel strung with 30 lb SX braided line. I had a topwater bite, so I moved up to a 7’6” rod so I could make longer casts in that clear water and not spook fish. I also caught a few that first day on a Z-Man Jackhammer with a Minnowz trailer that was white with a chartreuse tail.” 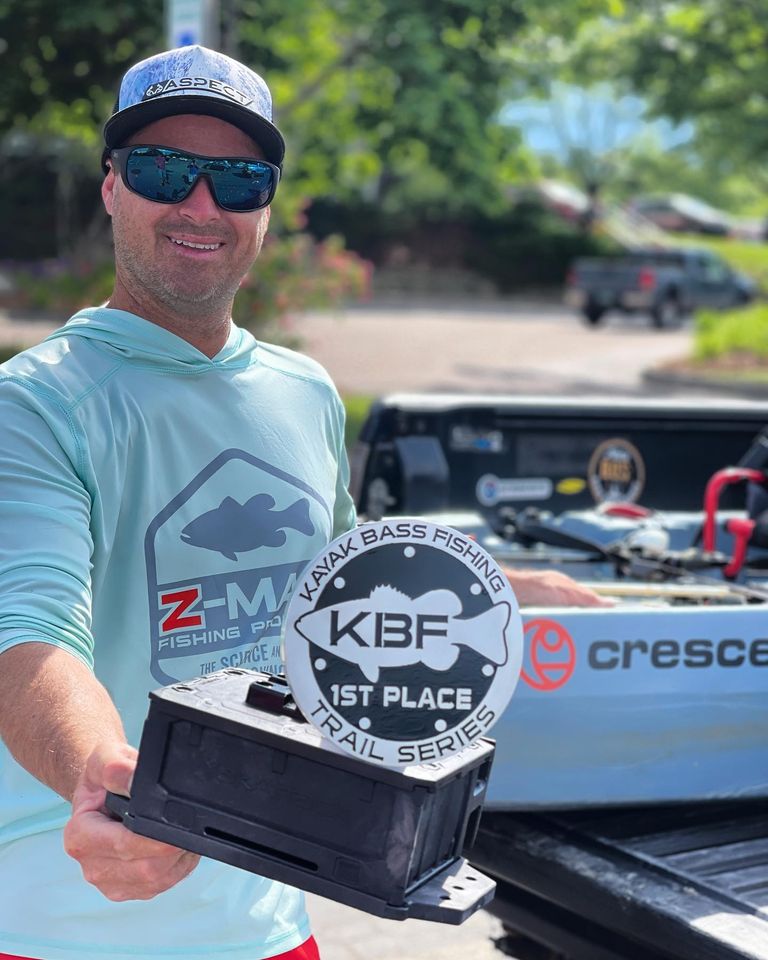 Gregory would finish the day with a 95.75” limit, besting his nearest competitor by .25”. He later remarked “I’ve been on the opposite side of those close losses.”

Sunday’s KBF Trail II would be another nail-biter. The Smallmouth “magicians” began to see through Gregory’s tricks. Adapting to the changed bite, he chose a different strategy and tackle as he adapted to Champlain’s moods.

KBF Trail II and Day 2 of the KBF Pro Series greeted anglers with sunny, mild conditions at sunrise. Like the previous day, the limits came in formidable and fast. Alex Miller topped the leaderboard with 90.5” before 90 minutes had passed in competition time, and Ryan Matylewicz jumped to second place early, just as he had the previous day.

And then the leaderboard lit up: First, Rich Biggie passed Miller, and then Adam Petrone passed Biggie. Chris Gomes, Adam Petrone and Drew Gregory each posted 93” limits, as Gregory took over 1st place on the Trail II board and the Pro Series leaderboard. Would Gregory sweep the weekend?

At the halfway point of fishing time, Derek Brundle then moved into first place with a 94” limit. It was a slim margin. In the meantime, Jody Queen tied Tyler Sweet’s 20.5” tank on the Dakota Lithium Big bass leaderboard.

Brundle upgraded to 95.5” and then Adam Petrone matched Gregory’s 94”, followed by Ryan Matylewicz, who did the same. It seemed that Gregory’s chance at a weekend sweep would elude him. It was a feat only one angler had ever accomplished. Against the stacked competition on Champlain, a comeback seemed impossible.

Gregory surpassed Brundle with 96.5”. The competition kept coming – Chris Gomes posted 95”, Alex Miller 94”, and it seemed everyone was within striking distance as the final hour began. And then former KBF National Champion Mike Elsea showed up, posting 96.25” – now Gregory’s lead had shrunk to a quarter inch- for the second day in a row.

And for the second day in a row, Gregory’s .25” lead was the difference. He had won back-to-back KBF Trails and the 2 day Pro Series event.

“On Sunday, I started on the New York side of the lake instead, on similar water” Gregory told KBF. “Once you see it, you start reading the matrix of the water, and you just know. You have to maximize the hot zones. But the fish were missing my topwater lure, so I changed approach and started fishing a Project Z chatterbait. I had to change again as the sun got higher. I threw a modified ¾ ounce SlingBladeZ spinnerbait. It was white and chartreuse, with the same trailer I had been using. A spinnerbait has more flash in the sun and the fish can see it from a distance. 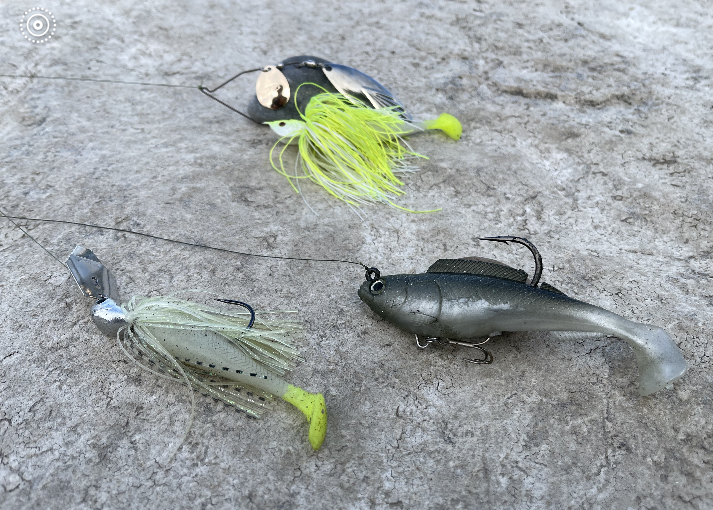 A Selection of Gregory’s baits. From Top to Bottom: ZMan SlingbladeZ, HerculeZ and Jackhammer.

“I was still on the New York side of the lake, but I moved to a different location. I had a gut feeling about a spot I didn’t prefish, so I checked my map and the exit was right there. I had four good fish, and I caught a small fish there to fill my limit. As I returned to the launch, I made a single cast to one spot and got a big cull. I landed that fish, uploaded it and left for the Vermont side at around mid-morning.

‘At the end, I went back to the area I fished on Saturday. I didn’t catch any there, so it was a good thing I changed my approach and didn’t start there on Sunday.”

Toward the end of the interview, Gregory waxed philosophical about his tournament success of late, describing the value of experience and motivation on the national trails. In the end, he demonstrated both his intellect and humility….

“I have been fishing all three major trails. I’ll be fishing Hobie B.O.S. and then KBF again later on, at Erie/St. Clair. I am starting to learn more from my mistakes, and also learn how to fish history on some of these lakes. I’m getting uncomfortable winning so much and it almost makes me want to lose. But when I see someone like Cody [Milton] or Guillermo [Gonzalez] on a run, I get motivated too. Hopefully this run I am on will inspire somebody else.” 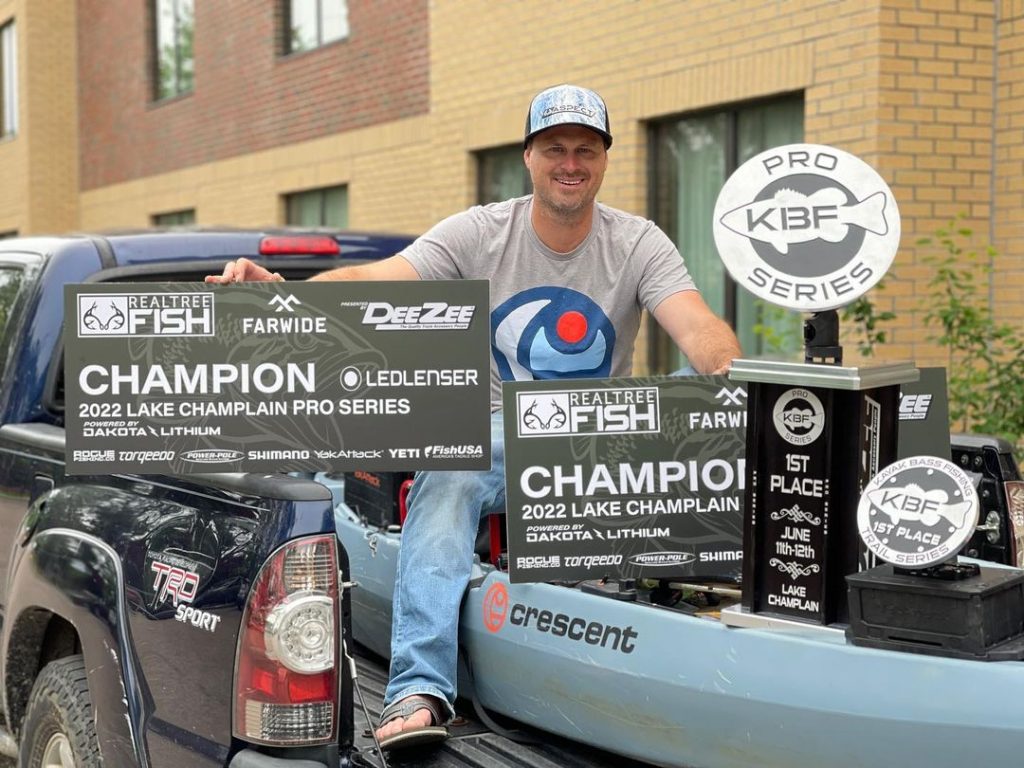 Up next: On June 25th-26th, the second to last double-header of the Realtree Fishing KBF Trail and Pro Series season will take place on Percy Priest (TN) and Lower Otay (CA).

Editor’s Note: An earlier version of this article mistakenly quoted Drew as saying “low-90’s to win.” It has since been corrected, based on the interview notes. 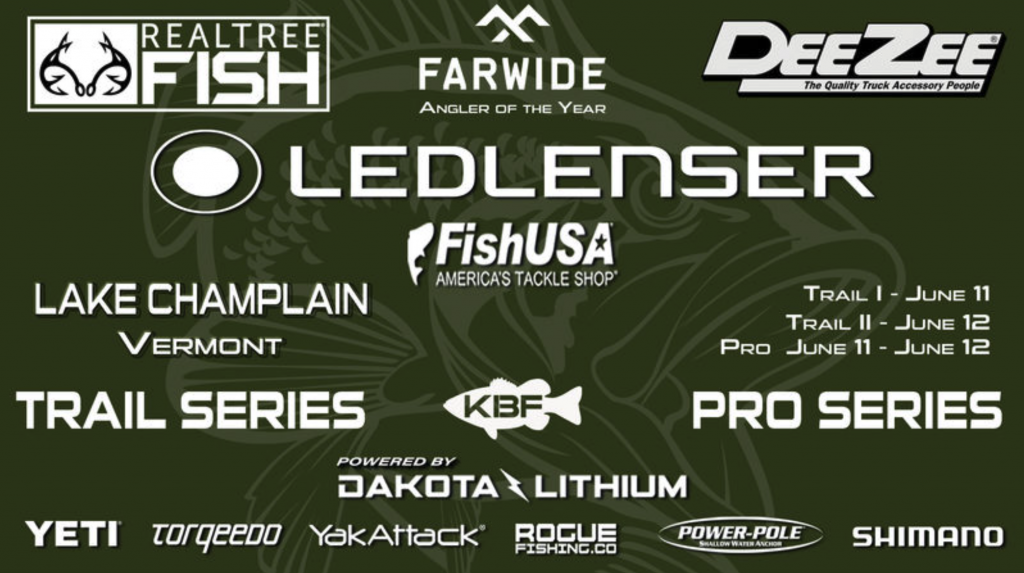