South Carolina’s Lake Murray hosted the 3rd full weekend of the Realtree Fishing KBF TRAIL and KBF PRO SERIES tournaments on Feb. 26-27, 2022. The weather leading up to the events was hot and the lake bite had been hot for weeks leading into the event. But with a cold front approaching during tournament weekend there were questions about how the bass would react. Those questions were answered by KBF anglers who posted big limits as a large field of competitors battled for points and prizes all weekend long.

The RealtreeFishing KBFTRAIL I presented by DeeZee and powered by Dakota Lithium started with mild temperatures and a hot bite on Saturday morning. Within the first 30 minutes of competition time, 4 of the top 5 anglers on the Ledlenser leaderboard were averaging over 18” per fish. Michael Thornton had the early lead with 39.75” and the tone for the day was set – anglers would need to sustain comparable averages per fish in order to contend.

One hour into competition time, Jason Isaacs had the lead. South Carolina angler and current Farwide KBF AOY leader Jason Broach also made a run, and was in second place. By the end of the 1st 3 hours of tournament time, Isaacs had sustained and extended his pace with a 82.75” limit, while Ketch Pro Dusty Yakker (who had a harrowing event at Murray in 2021) kept pace in second with 81.25” with Dylan Fuqua not far behind. The standings on the KBF Pro Series were also lighting up with fresh limits. One of them – a 76” bag posted early by Jeremy Heath, would signal the start of Heath’s momentous run.

Heath had been hovering around the top 5 during the first 3 hours of competition time. Between the third and fourth hour (9:30-10:30), he jumped from that 76” limit of five fish to first place, and 100.50”. In sum, he upgraded each and every fish by nearly 5”. John Tibbens, Ryan Nye, Michael Thornton and Dusty Yakker filled out the top 5 at the halfway point, and the question then became whether anyone would make a run or if anyone was holding a bigger limit to post.

The Dakota Lithium Big Bass Leaderboard would play a role in any run. Cory Dreyer held 1st place with a 23.5” monster, with Tibbens’ 22.75” in 2nd. Would Tibbens find others to challenge Heath? Tibbens would manage considerable upgrades of quality fish, enough to make a run at Heath. With two hours of competition remaining, Tibbens had moved up to 98.25”.

Despite Tibben’s heroic effort, Heath emerged the victor. In the KBF awards ceremony the next day, Heath mentioned spinnerbaits as his bait. “I started the morning off in the same spot, and broke a 22” bass off. Spent a few hours catching 12” fish. In the last hour, I upgraded the 12” I had, to a 15.25”, and in the last five minutes I landed a 16” fish that culled, too.”

In an exclusive interview with KBF, Heath, who is on the Native Pro Team elaborated:

“I was throwing a True South spinner bait in an area with a lot of lay downs. The fish were holding tight to the cover. I caught my biggest bass, a 22.75”, casting right into the middle of a laydown. That fish jumped and I almost had a heart attack.”

When it was over, Heath had his biggest payday – more than 5 thousand dollars – since winning the Native “No Limit” event in 2021. And it wasn’t over yet, as the KBF PRO SERIES would be decided the following day… 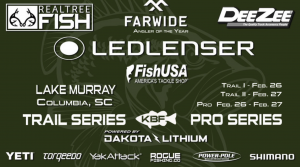 The RealtreeFishing #KBFTRAIL II presented by DeeZee and Powered by Dakota Lithium began at Lake Murray on Sunday, February 27 with colder, rainier conditions, as a cold front intensified over the region, adding a new twist to the elements anglers faced.

After one quarter of competition time, Ryan Nye led the pack with 86”. Charles Mizer was in 2nd place, an inch behind the leader, and Jason Broach was in 3rd with 83.25”. All eyes were on Broach, who sat atop the #Farwide KBF AOY leaderboard after a strong finish on Saturday. Shortly after 9 a.m., Broach upgraded with a 21” bass and took the lead with 88.5”. Nye quickly responded with an upgrade to retake the lead by a .50” margin.

Broach and Nye exchanged upgrades over the next hour as they also exchanged the top spot on the leaderboard.

On Sunday, Ryan Matylewicz landed a 23.75” monster bass took the top spot from Cory Dreyer on the #DakotaLithiumBigBass Leaderboard. Ryan Matylewicz added his name to the mix by posting a 23.75” tank on the Dakota Lithium Big bass Leaderboard, and at roughly the halfway point had climbed to 4th place. Two other anglers also entered the conversation: Lee Ward took over first place, and then Rob Braun, who had been in fifth place, jumped ahead of Broach and Nye into third. 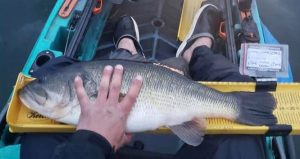 At noon the top 5 were Ward (1st), Broach, Nye, Matylewicz and Braun (5th). At 1 pm, everything changed: a KBF veteran, Jackson Kayak Pro Josh Stewart, posted a 94.5” limit that shook up the standings. Braun had been gaining ground on Ward but now he needed to bite into Stewart’s lead, too. With two hours remaining, anything could happen, as the top six were separated by thin margins.

In the end, Stewart’s limit held to win the day and a paycheck of over five thousand dollars and Matylewicz’ huge bass won $500 for Big Bass. Ward finished second and Braun took home the third place KBF TRAIL trophy.

At the KBF awards ceremony, Stewart said that “I figured out a little something yesterday, and caught all my fish on a shaky head in the same cove.”

On Sunday, the TRAIL I and II winders were in contention to win the KBF PRO Series, and it was Heath who prevailed, winning the custom KBF PRO SERIES trophy made by Ketch Products, USA.

With dominant back-to-back weekends at Kissimmee and Murray, Jason Broach has re-stated his case as leader in the Farwide Angler of the Year standings. Other anglers are near him in the standings but the alternating west coast/east coast Trails of the 2022 mean that Chris Spencer, his primary challenger on the west coast, will have a chance to match Broach in both the KBF TRAIL SERIES on Lake Roosevelt (AZ) in mid-March.

A similar scenario is playing out in the KBF Pro Series. Spencer and Broach both hold perfect scores, winning one event each in the young season. With his 5th place finish at Lake Murray (and two top 10 finishes for the weekend), Broach versus Spencer is setting up as an East vs. West rivalry, and will surely hold the attention of anglers over the coming month!