This weekend, Jeremy Mitchell bested 167 kayak bass anglers from across the country to become the first All-American Kayak Classic Champ. That title came with a trophy, a check for $10,700, and an invitation to compete in the 2021 Dee Zee KBF The TEN.

The All-American Kayak Classic was spearheaded by Joshua Booth of the Mo-Yak Fishing Series, a KBF Partner Trail. In addition to organizing, promoting, and running the tournament, Booth handled all the catering himself— which included Kansas City-style pulled pork barbeque, beans and taters for all the competitors. Planning, organizing, and running this event was a monumental task, assembling rosters and media materials from clubs across the country. Many KBF Partner clubs that competed were pleased to have this opportunity to honor their top-tier members and to test themselves against the best of other clubs from different states and regions. The chance to qualify for a spot in The TEN provided added incentive.

In describing Mitchell’s victory, Boothe said: “Jeremy’s main goal coming into this event was qualifying for The TEN—that was more important to him than the money. He was humbled by the caliber of the anglers he’ll be competing against at Kissimmee.” Mitchell reinforced the point, stating, “There’s going to be anglers a lot more talented than me fishing down there [at The Ten], so I’m going to just give it my best.”

While Jeremy lives only a couple hours from Truman Reservoir, which might have worked in his favor, other anglers finishing in the top 10 came from Indiana, Nebraska, Kansas, Oklahoma, Minnesota and Arkansas. This was truly a test of each angler’s ability to analyze and adapt, and all who finished high in the rankings can be proud of their accomplishment. Additionally, anglers had to contend with windy, fair skies and competitors who caught good fish—including three over 20” that were caught.

In the end, Mitchell’s impressive five fish limit of 92.75” prevailed as he averaged just over 18.50’ per fish. His closest competitive averaged 2” less per bass. Mitchell wasn’t sure he had won until the very end. In his words: “I was sweating bullets all through the awards ceremony, because I didn’t know how it would end up and I really wanted that trip to The TEN.”

Rounding out the top 5 in the standings were 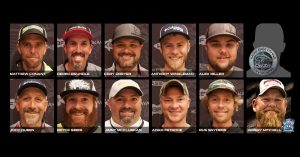