The 2021 edition of  DEE ZEE KBF THE TEN tournament was held on February 3-4, 2021 on the Kissimmee Chain of lakes in Kissimmee, Florida. The 2021 roster again included some of the  top names in kayak fishing, among them Jody Queen, Rus Snyders and Cory Dreyer. They were joined by:

That’s how West Virginia angler Brian Aliff once described his fellow Mountaineer Jody Queen. Most anglers know Jody as a kindly man, generous with his fishing knowledge and quick with a smile. He’s a gifted artist, too, and together with his wife Vicki and artist Gary Bowling, they run a non-profit center for the arts in historic Bluefield, West Virginia.

If you ever visit, you won’t soon forget the place. Part museum, part gallery and all funhouse, it’s a vibrant community. And if Jody Queen gives you a private tour, you may notice one of the old classrooms has been converted into a fishing room. Decorating the walls are as impressive a collection of tournament trophies as any professional angler has ever won.

That room will be getting a make-over, because Jody Queen has won the most exclusive, prestigious event in all of kayak fishing: he is champion of the 2021 DEE ZEE KBF THE TEN.

The 2021 edition of the tournament – the 5th all-time – had as many twists and turns as the mountain roads of West Virginia. You had to be tough to stick this tournament out. Every competitor gutted it to the very end.

Here is how it went down.

As the weather goes, so does the bite, and a cold front had pushed in from the north on Monday, February 1st. On the morning of what was scheduled to be Day 1, anglers reached their launches to find howling winds and white caps – and it was still dark. Faced with a worsening forecast and safety risks to competitors, Kayak Bass Fishing made the decision to postpone the start of competition, providing the anglers with a much needed day of rest as well as extra time to attend to gear and map study.

The bite at Kissimmee was slow during the first 2 hours of competition, with only 3 anglers posting scoreable bass. But they were quality fish, including 3 over 20”. Joshua Sharp held the early lead, but AAKC champion Jeremy Mitchel was only inches off his pace – and he had two big bass on the board by 9 am.

As the day and water warmed, the bite picked up. Soon, half the field had posted at least one bass on their custom Ketch boards. And the bites kept coming.

By mid-morning, however, some notable names had yet to post a bass. Where was Cory Dreyer? 2020 AOY Rus Snyders? 2019 ROY Derek Brundle? National Champion Matt Conant?

And where was Jody Queen?

With three hours left in competition, Jeremy Mitchell extended his lead by posting the first 5-fish limit of the day. He seemed to be cruising, and he had found big bass – really big bass. But he also had a 12” fish in his bag. Nonetheless, his 90.25” limit seemed secure.

It wasn’t. Over the next two hours, both Joshua Sharp (89.5”) and Rus Snyders (89.75” would surge to within less than an inch of it and Derek Brundle (68.75”) could also catch Mitchell by posting one big fish. It was going to come down to the wire, and at lines out Dreyer and Queen had yet to post.

Dreyer and Queen showed up when they found a good signal near the day’s end, when they uploaded strong limits, but in the meantime Mitchell had extended his razor-thin lead.

At the end of day 1, the standings were as follows: 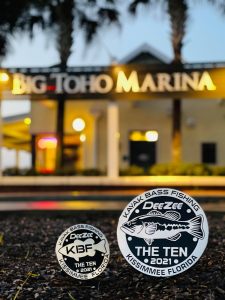 Day 2 on Kissimmee was a day of surprises, with unexpected rallies and a dramatic late finale.

And Petrone kept climbing. By late morning he had ascended to 2nd place. Alex Miller, who had been in 6th place on Day 1, now climbed to 4th place. The underdogs were making a charge.

With 3 hours left in competition, Adam Petrone – the 2020 KBF Trail South Central Region Angler of the Year had taken command of 1st place. His lead was thin over Snyders, but Petrone kept upgrading and extending it. It began to look as if two big upgrades might seal it for Petrone.

And now, the plot twist: But then Cory Dreyer posted a first place bag. And then  Alex Miller showed up. Having charged from 6th to 4th place overall, he passed Petrone and Dreyer to take over 1st place. When Day 1 leader Jeremy Mitchell upgraded, Miller’s lead held.

And then, the twist of all twists.

Jody Queen and Cory Dreyer had been fishing an area with poor signal strength and uploading their limits later in the day. On Day 1, they climbed the standings at the end to reach 4th (Dreyer) and 5th place (Queen). Dreyer had delivered a 153.50” total, but his Day 2 bag was not enough to pass the leaders Miller and Mitchell.

It would all come down to Jody Queen’s  Day 2 limit. And with 84.75”, Queen passed Miller and take over 1st place.

“I don’t know nothing all day long,” Jody said after the event’s award ceremony, “and then I saw Gene Jensen on the water, and all he said it’s a tough bite on the other lakes. So I just went on. I had no idea what the standings were. When I got back to the ramp, Jimmy McClurkan came up to me and asked what I had. He said “’I think you got this.’”

“That ramp was two miles from where I was fishing, so I was fishing without knowing the standings. I only had 4 fish until about 2:30 pm. My 5th fish was a small one. So I had a limit, and I just kept throwing the Z-Man jackhammer. It never left my hands.”

“I thought “’I got 5 fish, and I’m gonna go back to the area where I caught two big fish early in the week.’ I was working some hyacinth islands. There was little bit of breeze blowing, and I threw that Jackhammer and a 20.75” grabbed it. That was a 7” upgrade, and that’s the fish that did it.”

Jody Queen had competed in the TEN before. In fact, this was his fourth trip in five events. But this year was different. This year, his ten best fish earned him ten thousand dollars. And back at their school and gallery in Bluefield, West Virginia, he’ll be adding a new work of art to his fishing room: the first place trophy for  DEE ZEE KBF THE TEN.

The history of DEE ZEE KBF THE TEN is a who’s who of our sport. To qualify for it shows you are one of the best, to repeatedly qualify demonstrates outstanding consistency, and to win the event engraves your name on an exclusive monument. Simply put, there is no single event that is more exclusive or prestigious in the entirety of kayak fishing.

The Realtree Fishing KBF TRAIL presented by Dee Zee will make its next stop at Lake Murray, South Carolina on February 27-28, 2021. Sign up is open on Fishing Chaos!