On Saturday, January 30th, 2021, 87 top KBF competitors began competing for a range of prizes on Day 1 of the Realtree Fishing KBF TENvitational presented by Dee Zee. But every one of those anglers was really after one prize: 1st place. Why? Because 1st place earns a place in DEE ZEE KBF THE TEN. That means a good payday for the TENvitational but also an extended fishing vacation on the Kissimmee Chain and a chance for an even bigger payday.

Day 1 competition began on Saturday with a flurry of small bass. At the end of the first two hours, Michael Mooney had posted a 5 fish limit of 68.75” to take hold of 1st place. Right behind him were Alan Reed (4 fish) and Greg Hurt (3 fish).

But as the water began to warm, the TENvitational anglers found some lunkers. It began with a 23.75” landed by Josh Stewart, then a 22.50” landed by John Warchol, and then a giant 24.75” landed by Danny Gann. By the end of the day the top 9 anglers all had placed at least one fish over 20” long on their boards.

The hogs were feeding.

In the end, spots 5 through 2 were separated only by a few inches. As Day 1 came to a close, Florida’s Conrad Binetti was in 5th place with 91.25”, Indiana’s Matt Kiefer took 4th place with a 92” limit, and Dennis Campbell placed 3rd with a 92.5” limit. John Ferreira placed second with 93” while Joshua Sharp (TN) set himself up with a strong lead heading into Day 2, with a 98.50” 1st place bag. 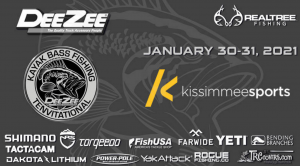 They say defense wins championships. Day 2 of the Realtree Fishing KBF TENvitational presented by Dee Zee would test that theory.

The day began with Tennessee’s Jimmy McClurkan taking the early lead, but McClurkan was already qualified for the TEN – would he do enough to play defense to eliminate a potential competitor?  Early on, only .25” separated him from 2016 KBF National Champion Matt Ball at the top of the Day 2 standings, who was 8th overall as he quickly climbed the board.

While Jimmy McClurkan’s strong start on Day 2 had him 1st place overall with an early total of 167.25”, Eric Jackson went on the offensive posted a limit and was right behind him with 164.50” in 2nd place, followed by Matt Kiefer, TEN qualified angler Bryce Gibbs and Nate Hall. Jackson and Kiefer were within striking distance – one big bass would vault them to 1st. If Gibbs were to win, he would block a competitor out. Defense.

On Day 1 the bigger bites came in at mid-morning, and those big bites and upgrades appeared likely to determine the outcome as the day wore on.

But fishing, like football, is a game of inches. And it was persistence and smaller upgrades that played the bigger role on Sunday. Day 1 leader Joshua Sharp overtook McClurkan and reclaimed his lead in mid-morning, but Indiana’s Matt Kiefer made a late surge to reach within 1” of Sharp’s lead. In 3rd place, 2020 KBF Angler of the Year Rus Snyders was not far behind the top two as the event headed into its final hour. Would Kiefer or Snyder overtake Sharp? Would another angler post a late monster and earn a spot in the TEN house?

DEE ZEE KBF THE TEN qualifier Jody Queen of West Virginia posted that monster, a 23.50” bass, to launch him into a money spot in the top 8. Would his defensive play be enough to block out  Sharp or Kiefer?

In a photo finish, Joshua Sharp held off Queen’s giant and Rus Snyders’ late upgrades and besting Snyders by a mere .25”. By doing so, Sharp earned a coveted spot in DEE ZEE KBF THE TEN.

The defense had failed. Joshua Sharp won the field, and advanced to DEE ZEE KBF THE TEN. 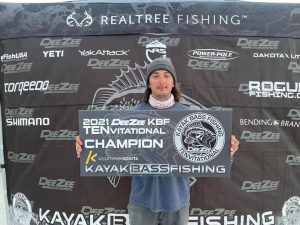 The top 8 in the TENvitational are below. For complete standings, click here.

LOOKING AHEAD TO DEE ZEE KBF THE TEN

The 2021 edition of KBF DEE ZEE THE TEN tournament will take place on February 3-4, 2021 on the Kissimmee Chain in Kissimmee, Florida. The 2021 roster again includes some of the sport’s top names, among them Jody Queen, Rus Snyders and Cory Dreyer. They are joined by:

Add Joshua Sharp to the list, and get ready.