If you take a few steps to one side, the line that divides kayak bass fishing from bass fishing from boats becomes a bridge. Many anglers, driven by a love of fishing no matter what the platform, cross back and forth over that bridge. Some cross it and don’t go back. Take, for example, Jamie Denison, one of the top kayak anglers in our sport – he won two events on the old F.L.W. circuit and his career earnings as a boater document his run. And as our sport keeps growing, more and more professional boaters fish on the kayak side. In recent years, Dave Lefebre has fished and won a KBF Open on Lake Erie, Mike Iaconelli and Kevin Van Dam compete in kayak tournaments and Jordan Lee hosted a kayak fishing event, to name a few examples.

The traffic flows the other way across that bridge, too. Recently, renowned kayak anglers Cory Dreyer and Craig Dye fished big boat tournaments on the Major League Fishing circuit, and both shared their perspective with Kayak Bass Fishing on moving from kayaks to boats. Dye spoke from the co-angler’s point of view, and Dreyer from the boater’s perspective; as we will see, both touched on common points, too.

Craig Dye on Fishing as a Co-Angler 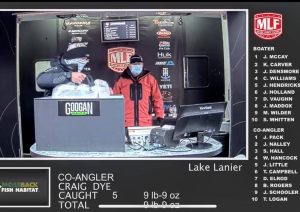 (Craig Dye at Weigh In. Screenshot Courtesy of Craig Dye)

Georgia’s Craig Dye is well known across the kayak fishing world. He has placed in Hobie B.O.S. events, national Kayak Bass Fishing Events and he counts a RealTree Fishing KBF Trail Series presented by Dee Zee win (Old Hickory, April 2016) among his early victories. His kayak tournament resume’ is as strong as they get.

In Mid-February of 2021, Dye fished a BFL tournament on Lake Lanier. He took 16th place as a co-angler. Dye described the difference between boats and kayaks in the following manner: “In a boat, you can run a pattern on many different spots in a lake; in a kayak that’s a difficult thing to do. For example, on Lake Lanier we were targeting rock piles in 2-10 ft. of water. We were able to hit about 15 different spots that fit that criteria. That would be almost impossible to do in a kayak unless the spots were close in proximity to each other.”

Dye went on to explain how his kayak fishing experience helped him as a co-angler:

“My most recent experience was fishing a boat tournament as a co-angler, so that is the perspective I can provide. As a co-angler, I recommend packing light. As kayak anglers, we already know how to consolidate and only bring what we need. Don’t be afraid to fish your strengths. With that being said, being able to be versatile is just as important. The boater isn’t going to catch all the fish, so fishing behind someone can be just as successful. If you’re going to fish as a co-angler, and you’re not comfortable backing up a trailer, be up front with your boater from the beginning. The most important thing is to show up open-minded and ready to learn.”

Cory Dreyer on Fishing as a Boater 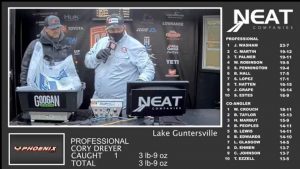 (Cory Dreyer at the Day 1 Weigh In. Screenshot Courtesy of Cory Dreyer)

North Carolina’s Cory Dreyer requires no introduction, but some highlights are in order. A KBF TRAIL champion, a champion of DEE ZEE KBF THE TEN, and a perennial presence among top finisher’s, his competitive fire always burns bright. For those of us who fish and travel with him, we noticed in recent years that he began towing his bass boat to larger events (full disclosure: I fished as his co-angler in the first tournament from that boat, in 2018). Some folks scratched their heads, wondering why he’d bring a bass boat to kayak tournament. Well, if you know Cory Dreyer, you know he’d launch a nuclear submarine if it helped him find a good bite. He’s as competitive as they get.

Dreyer’s resume’ has a boater isn’t as long as the one he has compiled in kayak fishing. That’s because he only fishes a handful of boat events every season. There have been some notable finishes – in the fall of 2020, for instance, he and KBF angler Eric Nelson won a local boat tournament on Randleman Reservoir in North Carolina.

Fishing local clubs is a long way from the big leagues, however. When he loaded up to fish last week, Dreyer put his kayak in storage, loaded up is Nitro and headed to Lake Guntersville. Having fished the lake and cashed a check there in October, 2020 at the Kayak Bass Fishing National Championship presented by Torqeedo, Dreyer is familiar with the venue. But this time was also different. Dreyer was going to fish the Major League Fishing Toyota Series against the likes of Dean Rojas, Aaron Martens and Boyd Duckett.

To make things more difficult, a series of major storms and cold fronts had shut down the region, causing a one day postponement. Dreyer was familiar with that, too – he was at DEE ZEE KBF THE TEN when it was delayed two weeks ago, so Dreyer knew what to do with his spare time: prepare. His commitment to practice is legendary. Intensive map study, travel and time on the water are second nature to him. Just watch this KBF video feature about him, and listen to what his wife Sabrina says about his obsession with fishing. Clearly, he’s committed.

Dreyer’s pre-fishing for the event produced multiple bites, and he was optimistic heading into Day 1. He began the day at one of his productive pre-fishing areas, a creek channel with deep water nearby. However, inclement weather and bad luck combined to set him back. As he noted in on social media: “I had three solid bites and landed one that weighed 3.9 lbs. My first bite of the day was a 5-5.5 lb. fish that threw the hook and the other one I missed I didn’t see but it felt like a solid fish.”

With over 230 anglers in the event, that single fish he landed placed him right in the middle of the pack after day 1, in 154th place. Day 2 proved to be more of the same. Like the previous day, he landed a single fish, and it was also over 3 pounds. But two fish weren’t enough to make the cut. I caught up with Dreyer after the event to discuss what he’d learned.

In his words: “I’m disappointed, but I fished my heart my heart out. I was fishing hard to the end. Some guys went home, but I was there to compete.”

Dreyer continued: “The big difference between kayak and boat tournaments is you cover more water with a boat. That isn’t always a good thing, however. You have to break down the water more in a kayak. I ran over 80 miles on Day 2 of this event. My first spot was 28 miles from the launch. I was hoping that with slightly warmer water, I’d find a better bite. In practice, I even fished a few spots I fished for Nationals, but I wasn’t fishing history. When I didn’t get those bites in practice, I left and didn’t go back. I could check every spot I fished at Nationals in a single day, but I did other things. ”

“I had 16 pounds one day in practice, but during the event I just didn’t get the bites. It was a timing thing – you had to find active fish at the right time, so the bite windows were short.”

Dreyer is looking ahead to building on this experience. “I’ll be fishing the MLF Toyota Series Central Division this year, so I have Dale Hollow and Chickamauga ahead of me. The thing is, I wouldn’t change anything I did in this event [at Guntersville]. The fish were there, they just wouldn’t eat. So I’ll approach every event like I always do, studying maps and breaking down water. I’m gonna stay after it.”

Dreyer ended with a note of gratitude for his co-anglers: “I was also grateful that I had a good experience with both of my co-anglers. My co-angler on Day 1 told me he appreciated me and the fact that I took his advice. They were both good guys, and I made sure they were comfortable, so it went both ways.”

Both ways – that’s how the bridge runs between kayak fishing and fishing from bass boats. Two renowned kayak anglers have crossed it already in 2021, and others will be sure to follow. They are all driven by a love for the sport of fishing, and for sharing that passion with others. 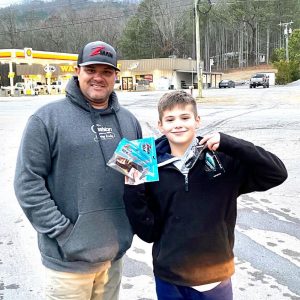 (Cory Dreyer with a Fan. Photo Courtesy of Cory Dreyer)

One day following practice, Dreyer ran into an aspiring young angler near Guntersville Lake. He reached into his boat and took out a handful of baits, and gave them to the young man as a gift. Bridges – kayak anglers don’t just cross them, we build them.