We are in the heart of summer, the “dog days.” The KBF Trail season is winding down and every bite is measured in inches and buckets of sweat, even on the northern lakes. But the weather offered some respite this weekend on Erie and St. Clair for the Realtree Fishing KBF Trail & Pro Series. Mild temperatures and some rain provided comfortable conditions and active bites for both Smallmouth and Largemouth Bass. In one case, however, it was a burst of sunshine that made the difference….

Reece Stoughton is an angler who adjusts well to the bite. Earlier this season, a change in approach at Lake Murray led to a dramatic difference between two days. “I was 99th after Saturday at Murray,” he said  “but I made some adjustments and finished in 6th place on Sunday [in Trail II].”

Adjusting to subtle moods in the bite helped him this weekend on lake St. Clair. Stoughton had vaulted into first place on the Ledlenser KBF Trail I leaderboard with 91.75” at roughly the one- third mark of competition time. He had company, however: Cody Milton, who is arguably having the best season of a now legendary career, was only .50” behind Stoughton. Milton passed him 30 minutes leader, flipping the lead so that Stoughton was now behind by .50”.

With 3 hours left to fish, Stoughton was stuck on a 91.75” limit. If it held, Milton would win. Or 2019 national Champion Mike Elsea, who passed them both when he posted a late 92.50” limit. At least Stoughton had a strong lead on the Dakota Lithium Big bass leaderboard – a 21” giant of a Smallmouth Bass.

And then the sun came out. In Stoughton’s words:

“I had pre-fished Friday and caught fish on random baits. I had a general area to fish, a grass flat in 17” of water. On Saturday I narrowed down the bite to one bait. It was a Strike King coffee tube in Goby color, on a 3/8 oz jig. The fish didn’t want it moving much, either, so I just dragged it.”

Stoughton would need at least one big upgrade to jump back into the lead. 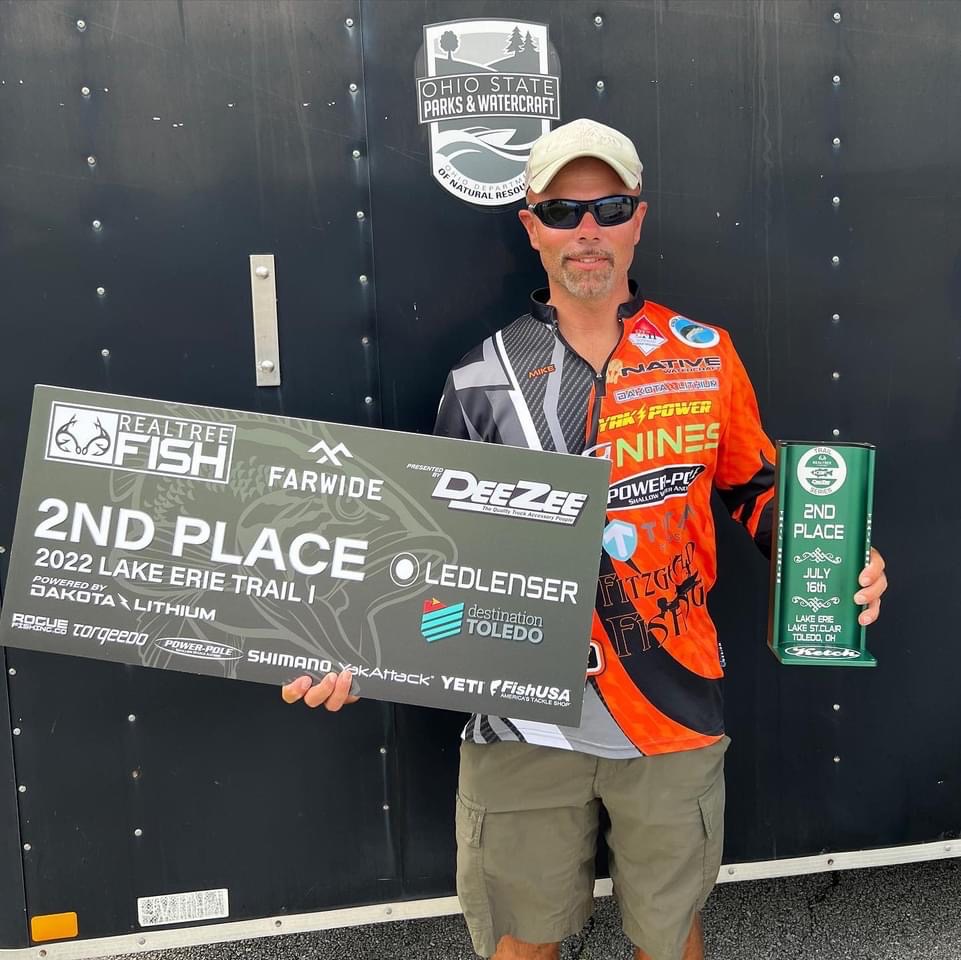 When it was over, Stoughton had upgraded by 4.5” to win the day, clearing Elsea’s limit by 4.25”. Stoughton’s 21” Smallie would win the Dakota Lithium Big Bass prize, and his 20.25” took 2nd place, too. Elsea would go on to finish second overall in Trail I and also in the weekend Pro Series.

The victory was Stoughton’s first on the Realtree Fishing KBF Trail. He also took second place in the KBF Pro Series after finishing 7th overall on Sunday’s Trail II.

When the KBF Trail II began on Sunday, Cody Milton had to mentally overcome a disappointing finish on Saturday when, after leading into the early afternoon, he dropped to third place overall. By the time that Trail II ended on Sunday, he had won his second KBF Trail of the season, his second Pro Series trophy and he was tied for first place on the Pro Series’ Angler of the Year leaderboard.

For Milton, the defending 2021 Farwide KBF Angler of the Year, the victories simply keep piling up. You would think he has a knack for finding fish in map study, or relies on history, but he came upon the spot that delivered his prize-winning weekend bags by chance.

“I prefished out of Metro on Friday. I only caught a few fish on a drop shot and a tube, so I started trolling back to the ramp, and all of a sudden I caught a fish. It was around one hour before the pre-fishing cut-off, so I stopped and I was catching fish 40 seconds. The area wasn’t special – it was just a 200 yard wide sand hole. There was some bait, and it was filled with Smallies.”

Milton had found his spot, and fished it for two consecutive days:

“All of my keepers bit a Megabass jerkbait or a crankbait. On Saturday, they wanted the pro blue color, and on Sunday I mixed it up. I think only one of my Sunday keepers was caught on a crankbait. It was wild. I shared the area with a boater from the BFL event and we caught over 100 fish between us on Saturday. The water was 14 feet deep, but the bass would school up sometimes, and hang out about 1 foot beneath the surface. I could see 4 pound Smallies just drifting by. It was cool to see.”

Milton’s season will continue in August when he travels south of the border. He will represent the United States at the Pan-American kayak bass fishing championship in Mexico.

Reece Stoughton fished from his Old Town Autopilot 136 this weekend. He also fishes from an Old Town Predator. Follow him on IG at reese_stoughton_fishing

Up next: The Realtree Fishing KBF TRAIL & Pro Series will conclude with a double header on August 20-21!