The Realtree Fishing KBF TRAIL Series presented by DEE ZEE arrived at Lake Murray, SC following a pair of big tournaments at the Kissimmee Chain in late January. Heading into the Lake Murray weekend, John Ferreira (MA) and Rus Snyders (TN) had each notched KBF TRAIL victories, giving them pole position in the KBF AOY leader boards. But the season is young, and there is much fishing to do!

There is a lot of KBF history in South Carolina, and a lot of KBF Trail history, too. In 2019, Dylan Fuqua caught the attention of the kayak fishing world when he placed in a Trail event at Santee. In 2020, North Carolina’s Marcus Smith beat a field of more than 130 anglers on that same lake. Within three weeks of Smith’s win, all of our lives and fishing plans would change due to a pandemic. We all would look ahead to 2021 and to returning to South Carolina. When we did, Lake Murray did not disappoint, providing dramatic finishes, a remarkable comeback, a dominant win and lots of big bass on the Bucketmouth Brand Big bass leader board!

The story of the Saturday’s Realtree Fishing KBF TRAIL Series presented by DEE ZEE truck Accessories on Lake Murray began on the day before competition. That Friday was when Ketch Team pro Dusty Yakker of Michigan was pre-fishing the lake and had a close call with the elements. While fishing in current, his kayak flipped on a strainer and he went into the drink. In his harrowing words, “rain gear gets heavy” when you fall into the water. He later noted “PDF save lives. Period.”

Fellow competitors, among them Cody Milton and Kristine Fischer, as well as KBF Tournament Director Amanda Brannon, rallied to Dusty’s side. Despite his ordeal, Dusty Yakker was going to try and fish on Saturday. And fish he would.

We will come back to that.

Competition began at 6:30 am on Saturday, February 27th, for the first of two KBF TRAIL events the lake would host on the weekend. 158 anglers hit the water, and the bass came in fast. Jacob Novak posted a fish within 20 minutes of competition start time and others quickly followed. After 2.5 hours of competition, Novak was in 2nd place and only .25” behind Terry Smith, the leader who posted three bass for 51”.

The fishing heated up as the lake did, and the BucketMouth Brand Big Bass leader board  soon caught fire. Big fish began pouring in and by mid day more than a dozen bass of 20” or longer were on the board. Clearly, this was a pre-spawn, late winter tournament, and it would be decided by quality fish rather than quantity.

With two hours to go, Rick Garavaglia made his move. He had been in the top five all morning but shortly after 11 am he landed a 21” tank of a bass that shot him to the top of the board with a five fish limit of 92.75”.

Garavaglia later said he was fishing “submerged rip rap about 6 feet off the bank. Since the water was dirty that [Google Earth] was the only way I could have known it was there unless I side scanned everything. So, I started on one end of a bank with rip rap and caught my first keeper with a Strike King 1.5 Hard Knocker (Black Back, Translucent belly) in less than 3 feet of water. My lure was coming to the surface beside my kayak and the bass inhaled my plug. After that, I fished a few docks, stumps and cement ramps, working my way to the point with the submerged rip rap and bingo, I got my second bite and lost it, but I knew I was onto something.”

The big later bites came from a different area. As he explains, it was “a small shell bed on a flat above the submerged rip rap. I caught my next four fish off that spot. When I went back to Google Earth, I saw there were several stumps that surrounded that bed. The fish just kept reloading in there even when I had to go in to retrieve my crankbait.”

But the big sticks were also starting to stack quality fish. 2020 KBF National Champion Matthew Conant, 2018 KBF Angler of the Year Cody Milton and 2020 Northeast Region AOY Ken Wood were all in the top five at mid-day, and unless some big late limits came in, it was clearly going to be a photo finish.

And that it was. In the end, Matthew Conant was able to upgrade and tie Garavaglia’s 92.75” bag, but Garavaglia’s 21” bass broke the tie, giving him the KBF TRAIL win. 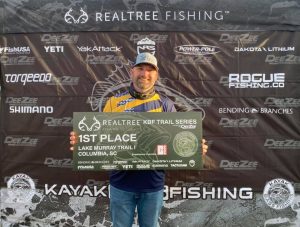 Garavaglia reflected on the win by thinking of his friends and kayak fishing club in West Virginia: “I was here to build relationships with friends I’ve made in our WVKA club back home. John Rapp has done an amazing job getting things going. He’s helped me more than he’ll ever know. This is just my third year ever in a kayak. I finished 5th overall in my club my first year and dropped to 20th last year. I’ve not been able to crack the top 3 in a club tournament, but Saturday just felt natural, like God meant for this to happen.”

Garavaglia topped the leader board, but another 14 anglers would win checks in the KBF TRAIL I at Lake Murray.

And that’s where we return to Dusty Yakker. Cold and exhausted after a frightening spill, he rallied in a big way. He woke up Saturday and retrieved his kayak, assessing the loss. He then decided to fish the KBF TRAIL with what little time remained. Without much gear and limited time to fish, Dusty placed 15th on the final leader board, cashing a check that may cover some losses, and certainly lift his spirits. With characteristic Midwestern calm, he later said “Not bad for 3 hours of fishing and a couple of lures.”

Given the size of the field and the scare he had, it’s not bad at all.

The Top 15 Lake Murray I

Full Standings for Lake Murray I (Saturday, Feb 27) can be viewed here on Fishing Chaos: https://app.fishingchaos.com/tournament/2021-kbf-trail-lake-murray-i/leaderboard/kbf-lake-murray-trail-i

Click here for the full 2021 Kayak Bass Fishing Event Schedule to find an event near you!

About the champ: Rick Garavaglia is on the Enigma Fishing pro Staff, the Sixgill Fishing Pro Staff, and a member of the Mountaineer RV and Outdoor Center Fishing team. He fishes with M4 Custom jigs and ned heads.