The Realtree Fishing KBF TRAIL Series presented by DEE ZEE arrived at Lake Murray, SC following a pair of big tournaments at the Kissimmee Chain in late January. Heading into the Lake Murray weekend, John Ferreira (MA) and 2020 KBF Angler of the Year Rus Snyders (TN) had each notched KBF TRAIL victories, giving them pole position in the 2021 KBF AOY leaderboards. But the season is young, and there is much fishing to do!

There is a lot of KBF history in South Carolina, and a lot of KBF TRAIL history, too. In 2019, Dylan Fuqua caught the attention of the kayak fishing world when he placed in a KBF event at Santee. In 2020, North Carolina’s Marcus Smith beat a field of more than 130 anglers on that same lake. Within three weeks of Smith’s win, all of our lives and fishing plans would change due to a pandemic. We all would look ahead to 2021 and to returning to South Carolina. When we did, Lake Murray did not disappoint, providing dramatic finishes, a remarkable comeback, a dominant win and lots of big bass on the Bucketmouth Brand Big bass leader board!

128 anglers launched Sunday morning, some returning to yesterday’s bite and others in search of new waters. Early on, both quantity and quality showed up on the leader board as the morning limits were more and longer than those posted Saturday morning after 2 hours of competition on Lake Murray.

But one limit stood out: 2018 KBF Angler of the Year Cody Milton grabbed the early lead with a big 94” that included a 25”monster bass. 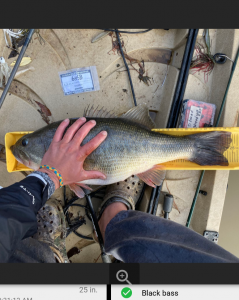 As the day wore on and a warm front moved in, the expected late morning bite didn’t transpire as it did on Saturday and anglers began grinding out limits to earn AOY points. They would need a Hail Mary of a surge that might catch Milton.

One of those anglers was 2020 KBF National Champion Matthew Conant. He finished second on Saturday and at mid-day he made his move, moving up to second place and within a few inches of  Milton. Milton upgraded, and Conant also gained some ground – but he needed a big bite or two to catch Milton.

It was Milton who ended up with the big bite. He upgraded twice within the final 90 minutes of competition, and one of those upgrades was a 22.25” bass that pushed his limit over the century mark, to 102.25”. It was one of the biggest limits ever caught in KBF tournament competition and a strong finish on a  day when Milton led the field from wire to wire, joining Mark Edwards, Conant and Jared Kutil as the only anglers to win checks on consecutive days at Lake Murray. Conant’s consecutive second place finishes meant more than money: he earned top quality AOY points for the second day in a row, a result that should have him at or near the top of the first KBF AOY standings.

Sunday belonged however to Milton, that big limit, and those two big fish. Milton’s winning strategy was on the river, but it involved making adjustments from Saturday to Sunday. As he described it while travelling home to Arkansas:

“The fish were in there, but we didn’t know how many were in there. There were few people fishing in the river, just me and Drew [Gregory] and Kristine [Fischer] and a few others. But it turned out there were lots of quality fish.”

“I didn’t catch a bass in practice [on the main lake], so I ended up going to the upper end. I landed a 23” on a ned rig in practice on Friday, but it was hard to fish slow on Saturday. I noticed that the spinner bait was there. So I fished a ¾ ounce and 1 ounce spinner bait on Sunday. That’s what the 25” bass hit. The last fish was that 22.25”. It was on a pile down in the current. I crossed the river and returned, and caught that fish on a ned rig. You really had to get the lure down to them in 7-9’ of water.”

With a KBF TRAIL win under his belt and a long season ahead, Milton has plan to fish hard in the early season. “I’m headed home now, then to Broken Bow for the Hobie event this week, then Lake Fork [for B.A.S.S.], then the KBF TRAIL at Pickwick. I want to push harder this season to get back in The TEN House [for DEE ZEE KBF THE TEN] and also to shoot for a top 3 in Hobie B.O.S.”

Cody Milton was the 2018 KBF Angler of the Year, and his list of tournament victories stretches as far behind him as the highway ahead. With two checks and a big win from the KBF TRAIL at Lake Murray, he’s got the gas money and the knack for big bites. It’s what every angler needs heading into March, one of the season’s best months, where the tournaments are as big as the bass.