The first event of the Realtree Fishing KBF TRAIL presented by DEE ZEE was held at Lakes Pickwick, Wheeler and Wilson in Alabama on Saturday, March 27th. The week had brought intense storms to the region and anglers launching on Saturday morning faced warm, breezy conditions, cloudy skies and high water. Those conditions brought the pre-spawn bass shallow, however, and KBF competitors brought in big limits as well as big fish.

More than half of the field checked in a five fish limit; every fish, and every fraction of an inch measured, was needed, because this tournament went to the wire.

The morning bite was strong and fish piled up quickly on the Fishing Chaos leaderboard. Robert Sheets took the early lead with a 78.75” limit of five fish, but Eric Polenz was only 2” behind him at the 2.5 hour mark. In third place, Nathan Chagnon was on quality bites: he had 73”, but with only a 4 fish bag. Polenz would upgrade but it was Chagnon who continually upgraded, becoming a threat to every angler who took the lead as the morning progressed.

And then the drama began. Ken Morris emerged as the leader at mid morning, courtesy of a 22″ tank of a fish that took over the top spot on the BucketMouth Brand Big Bass leaderboard. Morris would upgrade several times as anglers chased him up the board. The race to catch Morris became the story of the afternoon.

In the meantime, however, attention also turned to a familiar name in KBF circles. Long time KBF employee Joe Haubenreich, now retired, signed up to fish the event, and he threatened the top of the leaderboard, reaching as high as 11th place. Haubenreich eventually placed 15th overall, a solid showing by a long time angler who nonetheless had limited experience fishing big kayak tournaments.

In the meantime, another familiar name challenged Morris atop the standings. Slowly but surely, Drew Gregory was putting together a large limit, as well as upgrades, to keep the heat on the leaders. Those included his Crescent Kayaks teammate Ken Morris. With one hour left in competition, Morris held first with 98.75” while Nathan Chagnon had climbed to second with 95.75”. Gregory then made his run, climbed to third with 94.50”. He  then culled a fish to pass Chagnon. And then he culled again, adding a 21.25” to his limit with minutes to spare. At lines out, Gregory had tied Morris at 98.75”. Would another  upgrade come in before the cutoff for photo uploads?

It would not – Morris won a dramatic tie-breaker by virtue of his 22” big bass.

Morris had fished Lake Wheeler, and had little time to pre-fish. As he described it: “I left Cleveland, Ohio on Thursday night. I launched at 2:00pm on Friday, paddled around assessing the water clarity and depths for about an hour. Started fishing and got 3 bites in 25 minutes. So I packed up and went back to the air BNB for the night. [I decided I was] Going all in on one spot that produced 3 bites! “

Tournament day proved Morris’ hunch correct: “I quickly replicated the spinnerbait bite from pre-fishing and discovered a frog bite. I fished fast and covered as much water as possible switching between a spinnerbait and frog. Every bite was a quality fish and everything fell into place.”

Reflecting on Morris’ win on social media, his teammate and challenger Drew Gregory demonstrated the sort of professionalism and class that defines the best in our sport: “I’ve never been happier to lose a tie breaker to someone in my life!” 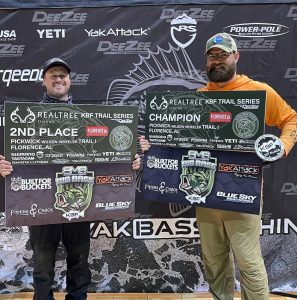 To view the complete standings: https://app.fishingchaos.com/tournament/2021-realtree-fishing-kbf-trail-pickwickwilsonwheeler-i-presented-by-dee-zee