Eric Polenz was in second place at 9 am on Saturday, March 27th. Competition had begun at 6:30 am and he immediately found quality bites. As the day wore on, however, those big bites began to fade. 16th place in the final standings, with an 84” limit, was a good day. Would he make adjustments, or stick to the plan?

Sunday morning, March 28th The air is cooler in Alabama, and the early bite is once again hot for Polenz. He is at the top of the leaderboard at 9 am, with a good bag of 4 fish. Other anglers are creeping up, however. One of them is DEEZEE KBF TENvitational champion Joshua Sharp of TN who was in 2nd place and had posted  a 21.25” slob on top of the Bucketmouth Brand Big Bass leaderboard. North Carolina’s Shawn Worrell is right behind him in third, too. Would Sunday be a repeat of Polenz’ Saturday – a fast start, and a quick fade?

It wouldn’t be a late day collapse. It would instead be a final stand. And Polenz did it by sticking to the same plan, and the same spot.

Polenz would need upgrades and big fish, and those began to show up as the day wore on. Halfway through the Realtree Fishing KBF TRAIL presented by Dee Zee, John DiCenzo of Massachusetts caught a 22.50” hog to take the top spot on the Bucket Mouth Brand Big Bass leaderboard, and then Rus Snyders posted another. Polenz kept pace, posting a 21” bass.

The tournament was setting up for another close finish. Where Ken Morris won on a tie breaker the previous day, Polenz would win by a thread. In the end, it came down to sticking to his plan. In his words:

“I drove down from Michigan on Thursday night and got in around 2am. Picked a spot on Wilson that looked good on the map and prefished it Friday morning. I fished the same stuff Saturday as I did Sunday which was a 100-200 stretch that had some wood and gator grass. Some big fish moved up into it throughout the day and I was able to get some in the boat. All my fish were caught on a vibrating jig.”

“I truly didn’t think my area had enough to win. I had my fingers crossed for a top ten!”

In the end, Polenz’ 96.75” limit bested that of 2020 KBF Angler of the Year Rus Snyders by .50”. John DiCenzo and his 22” anchor fish managed third place, followed by Saturday’s runner up Drew Gregory who tied for third, but once again dropped a spot on a tie breaker. Kristine Fischer, who had won previously at a KBF TRAIL on these same waters, rounded out the top 5 with a 92” limit. Polenz had taken the best punches that the best had to offer, and prevailed.

On the feeling of taking home a KBF TRAIL trophy, Polenz said: “It’s hard to put into words. When you look left, then look right, and see guys like Rus Snyders , Drew Gregory, Mike Elsea and the other hammers… it’s an unbelievable feeling. I’ve looked at the circle trophy in pictures and wanted to hold one up, but who doesn’t? Sometimes it’s just your day, and today it was mine.” 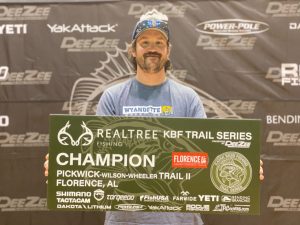