When Jody Queen won the first Hobie Bass Open Series Tournament of Champions on Lake Ouachita in 2019, he became the talk of the tournament fishing world. He was a guest on every kayak fishing podcast in the country and Mike Iaconelli invited Queen to his radio show. Using a metaphor befitting Queen’s last name, Bill Barnes described the Hobie event in Bassmaster Magazine as crowning the “incoming kayak dynasty.”

The Hobie B.O.S. Tournament of Champions crowned new royalty on November 14-15th in Knoxville, TN, when Ryan Lambert won the Tournament of Champions and Drew Gregory clinched the Hobie B.O.S. Series Angler of the Year title. Fished on the upper end of the Tennessee River, the tournament range placed anglers in waters loaded with Smallmouth and Largemouth Bass along the Holston and French Broad River as well as Lake Loudon and Lake Tellico. To figure out the bite, anglers had to contend with post-frontal conditions, wind and high water. It had the makings for a two day, feast-or-famine event.

At the end of Day 1 the majority of competitors had feasted, with 34 out of 50 anglers submitting limits of five fish. But the top 4 anglers had submitted big 5-fish limits above the 90” mark, and a fifth, the 2020 KBF Angler of the Year Rus Snyders, was right behind them with an 89.25” bag. Two of those top 4  anglers – Ryan Lambert and Jordan Marshall – kept their Day 1 pace on Day 2.

Ultimately it was Lambert who prevailed by adding 91.25” to his 95” Day 1 limit. Lambert described his strategy as follows: “My game plan going into this tournament was simple: do exactly what I did a month before on the [Tennessee] state championship. I knew if that school was in the same place I had a real shot at winning it. I caught them day one on a spinner bait for a couple casts and then switched to a Ned [rig]. I was in that school for 45 minutes on day 1 to get my 95” limit, then I stopped. Day 2 I knew I’d have to fish them all day so I finessed them all day long. Five bites from that spot would guarantee a win.”

Lambert went on to describe the win: “As for the feeling, I broke down in tears when I landed my fifth fish. I was overcome with emotions. I had been challenged, frustrated, nervous, and then exploded with adrenaline. This truly was accomplishing a dream of mine winning the crown jewel of kayak fishing. I don’t know what will top this.”

Rounding out the top 5 after Lambert and Marshall were Kristine Fischer in 3rd, Coley McGowan in 4th and Joseph Sanderson in 5th place. North Carolina’s Drew Gregory was 7th in the final standings, moving up from 14th place on Day 1 when he added an 81” limit on Day 2. His Day 2 move clinched the Hobie BOS Angler of the Year title, adding another major trophy to his 2020 Hobie Season (Gregory was champion of the Hobie Dardanelle event).

Gregory described his techniques and adjustments from Day 1 to Day 2:

“The water had come up a couple days before the tournament and all of my smallmouth pre-fishing were on the weak side of the river. For some reason on day 1 of the tournament I couldn’t find a smallmouth! All I caught were largemouth on the river. The only exception was the final fish of the day that I caught literally at 2:58pm with just 2 minutes to spare! It was an 18 inch Smallie on the strong side of the river on a bluff wall. Not only was it HUGE for my stringer but a huge clue that maybe since water levels have settled for a couple days the fish had re-positioned. On day 2 I targeted more of the outside bends and they were there on bluffs or the base of trees with a nice root system and undercut bank. I would skip a ProjectZ chatterbait (with 4-inch Diezel minnow trailer) under branches into the trunk area and hope one was ready to smoke it! I didn’t smash them either day really, but I did above average which usually moves you inside the top 10 in any 2-day tournament. Fortunately for me 7th place was good enough for a solid check and ahead of Jody and Rus which allowed me to take home the AOY title!” 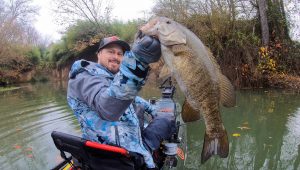 Gregory finished his year with the kind of magical run that anglers dream about. It began with a 2nd place finish at the KBF Clermont Chain Pro Tour event, and then he caught fire: in addition to his Hobie BOS win at Dardanelle, Gregory placed 6th at the KBF TRAIL Series Championship and 9th in the KBF National Championship at Guntersville in October. But the AOY victory was a special title to take home., and Gregory expressed it as follows:

“I can’t even describe how winning the AOY feels because I still can’t believe it! I just have so much respect and appreciation for how good Jody [Queen] and Rus [Snyders] are that I never dreamt that both of them would have a day where they didn’t limit.”

He continued: “I thought I’d basically have to win the TOC to also win AOY! I just feel super blessed, humbled and proud of how hard I’ve worked and fished this year on so many different bodies of water. Being consistent is every angler’s goal because we know it’s not realistic to win every tournament. So, for me to come into this trail with only 3 regular season events left and go 4th, 1st, 4th and then 7th at the TOC to win AOY is truly the consistency that the award was meant for. I just can’t believe that I’m the one who did it!” 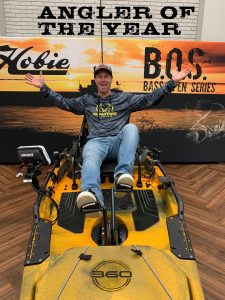 2020 has been a challenging year for kayak fishing’s major trails as well as its regional and grassroots clubs. As KBF, Hobie, B.A.S.S. and others have shown by maintaining their commitments to anglers and host venues all year long, kayak fishing is here to stay, and it continues to grow partly because its late season events showcase the best talents in the sport.