Saturday, September 4th began the Labor Day Holiday Weekend with over 50 KBF competitors launching at dawn on beautiful Kentucky Lake for the final weekend of the 2021 RealtreeFishing KBF TRAIL presented by Dee Zee Truck Accessories. The weekend would feature names of familiar KBF competitors atop the leaderboard as the best of the best battled for prizes, points and more.

Before we continue, a note about the word “familiar.” America’s kayak tournament anglers know Kentucky lake well, because it’s where the first major national events were held in our sport, beginning with the 2016 KBF National Championship. And “familiar” is the right word, because Kentucky Lake is where those family reunions were held. During the awards for Trail event I on Saturday, Chad Hoover announced that the KBF National Championship would return to Kentucky Lake in October, 2022. Mark your calendars! 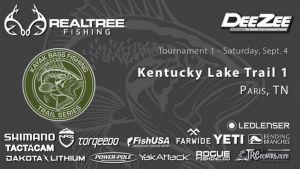 Prior to the weekend, one of the main story lines was how the crowded FARWIDE Angler of the Year race would play out. At Clear Lake, Daniel Balaba passed the AOY leader Jody Queen into 1st place overall and Queen would be looking to retake his spot on top at Kentucky Lake. A host of other competitors were also jockeying for position, among them Drew Gregory, Jimmy McClurkan, Josh Stewart, Eric Siddiqi and Matt Ball. At the start of competition, McClurkan was on the outside of the top 10 looking in, while Drew Gregory was in 7th overall. By the end of Saturday’s Trail, both had improved their standing, as did the others, but none more so than McClurkan.

The early story on Saturday was that of Eric Jackson, a legend in our sport. Jackson held the lead with 84.75” at the halfway mark, while Siddiqi was in 3rd place overall courtesy of his 20.25” big bass. But Jimmy McClurkan posted an 85.25” limit with just over one hour left, and he would make a cull that sealed the win during the final hour. With that cull, he improved his limit to 87.5” inches. The remaining money spots read like a who’s who of KBF history, with Eric Jackson taking 2nd place, 2016 National Champion Matt Ball taking 3rd, Josh Stewart 4th, Drew Gregory 5th, Jody Queen 6th and Eric Siddiqi just outside the money in 7th: Siddiqi did not leave empty handed, as he won 1st place for Bucketmouth Big Bass. 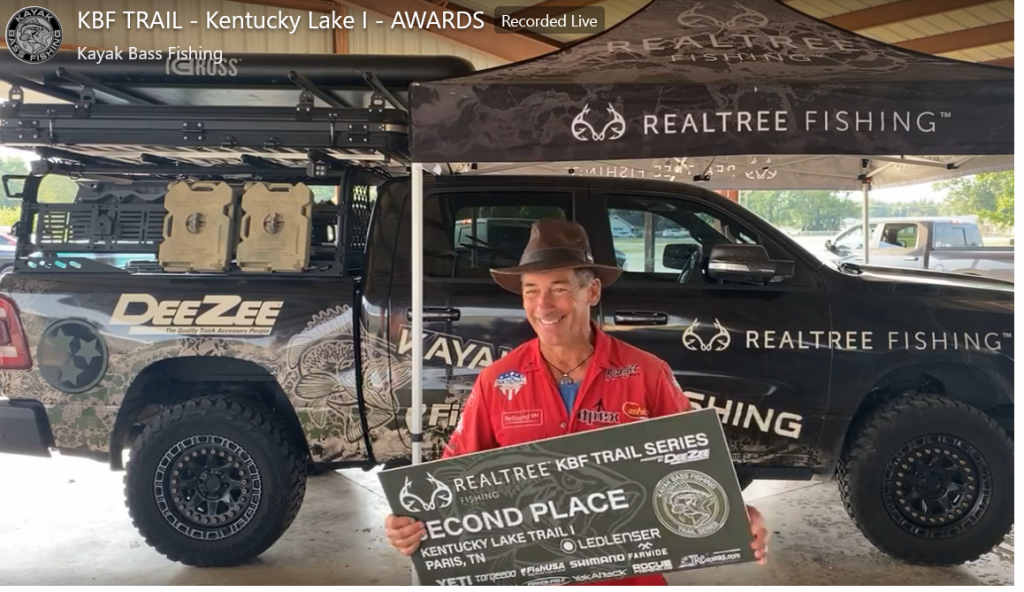 But the story was McClurkan. During the awards ceremony, he noted he had caught his fish on chatterbaits and Senkos. He described his motivation: “This is my third year fishing in KBF. I started because I was watching [Chad Hoover] fish from a kayak and I thought “that looks like fun.” I was in the [DEE ZEE KBF] Ten House last year and that’s my goal again for this year.”

McClurkan’s victory went a long way toward that goal: it moved him from 12th place into 3rd place overall in the Farwide AOY race, just behind Jody Queen.

When the final tournament of the 2021 RealtreeFishing KBF TRAIL presented by DeeZee began at Kentucky Lake, it was a final chance to improve position ahead of the KBF TRAIL Championship at Shreveport/Bossier City on Oct 13-14, 2021.

After one quarter of competition time, Saturday’s victor Jimmy McClurkan was once again in the lead. He had posted 4 fish for 73.5”, and his limit included two bass over 20”, placing him atop the #BucketmouthBrand Big bass leaderboard. But Parris Edwards was keeping pace – he had posted three fish for 51”, and was one big bass behind the leader.

With a win, McClurkan would tie Queen for 2nd place. As the day progressed, other anglers moved up the leaderboard, as Drew Gregory and Jody Queen both moved to within 2” of McClurkan’s lead. Gregory would ultimately finish in third place, a consequential result that moved him into a tie for 4th place in the AOY standings, while Queen would finish in 4th place on the day.

The victory went instead to Michigan angler Robert Weiker. Weiker had won a KBF TRAIL at East/West Harbor in July, and he wasn’t finished yet. Weiker had placed 9th on Saturday, and his friend Kyle McAlarney placed 19th. As Weiker put it:

“Kyle McAlarney and I on a whim decided to head down to Kentucky Lake so he could give it a shot to qualify for the National Championship. Well just before leaving he realized he qualified through the monthly so this was just a fun trip. We had 2 days to practice and that got us absolutely nowhere so we heard from the guys in the house that we had to go up a creek. We found one on the map and off we went. I fished main lake and Kyle took off to scout the creek and wouldn’t ya know he ran into Jimmy [McClurkan]. Jimmy said he practiced there but wasn’t gonna fish it so we decided that was gonna be our gamble for the next 2 days. Day 1 we both had a decent day with quick limits of mediocre fish on jigs and jack hammers. But the key to day 1 that led up to day 2 is we found a MEGA SCHOOL up the creek but they saw us and hid deep down in a brush pile.”

Weiker returned to the creek on Day 2, but the conditions changed, as did the plan:

“We had planned on going right to that brush pile in the morning but then the rain hit hard so we stopped at the mouth and both tied on Pro Tackle Crafters spinnerbaits and I added a buzz bait to that mix. The morning started off absolutely crazy with 90 inches on the spinnerbait and buzzbait all on 1 root ball in 14 minutes. Then we decided to go up the creek and immediately I caught a 21” on the spinnerbait. It seemed the further up the creek we went the less fish we were seeing and then it clicked: all those big ones we saw were headed to the mouth before the storm!! So I took of and made a mad dash to the mouth just to flip a rage bug in a deep tree and caught a 21.25 to top off my 96”, the biggest live tournament bag of my life. I had no idea that this weekend would put me in the top 10 in the country and so close to THE TEN house. So I went from meh maybe I’m gonna fish the NC to yup booked a house the next day!”

When his late limit of 96” was posted, he had won his second KBF TRAIL of the 2021 season. And he had done something more: he had taken over 10th place in the FARWIDE AOY standings, placing him within the cut for anglers hoping to qualify for DEE ZEE KBF THE TEN.