Sometimes, you get a second chance. Or a third.

One year ago, Pennsylvania angler Nate Hall competed in the Realtree Fishing KBF TRAIL presented by Dee Zee at Ohio’s East/West Harbor. He finished in 3rd place that day. On Saturday, July 24, 2021, nearly one year to the day, he returned to compete on the same water, but only finished in 53rd place in a field of 103 anglers. He was headed in the wrong direction.

Hall would change course on Sunday and finally get the result he had worked so hard to achieve and to which he came so close in 2020. In the end, only a few inches separated first and second place, and every Bucketmouthbrand big bass counted, as all three of the top 3 finishers in the KBF TRAIL Sunday tournament on East West Harbor secured their spots with those Big Bass. 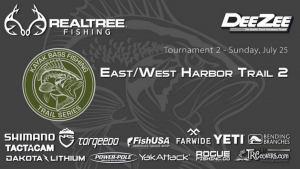 The KBF TRAIL at East/West Harbor was one of the biggest weekends of the 2021 KBF TRAIL season. 83 competitors began casting at 6 am on Sunday to begin the second tournament. The early bite was fast, as it was the previous day. And just like the previous day, Virginia’s Casey Reed posted the day’s 1st limit, as he sat atop the leaderboard with 89.5” early on. But Reed was posting better fish on Day 2, and his early limit was a 12” improvement over the previous day, when he finished 14th overall. The question was whether he would manage upgrades. 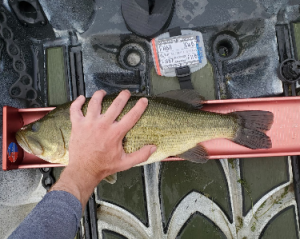 At mid-morning, Nate Hall posted a 91.25” limit to the Ledlenser leaderboard and a 20.25” Largemouth Bass to the Bucketmouth Brand Big bass leaderboard to pass Reed. Jody Queen held the third spot, 4” from 1st place, at noon. With two hours left to fish, it was going to come down to upgrades and late limits.  And that’s how it went down, with Hall posting an 18.25” Largemouth shortly after noon, reed upgrading with a 17.25” bass at 1:30, and Queen posting a 17.75” bass shortly before 1 pm and an 18” at the end.

After coming up short in two consecutive events, Hall decided to return to his original plan. And he went back to basics, and it paid off big time.

“My prefishing did not go as expected. My plan going into the event was to flip and punch shallow, thick vegetation and so when I got up there Thursday morning I went out on West Harbor to do just that. Only I did not come across them like I had thought I would and only got 4 bites all day. Because of this I decided to go to East Harbor on Friday and try to do the same over there. This time I was able to find quite a lot of fish, but they were not the quality I was looking for.”

“Going into Saturday I decided to go somewhere else and went to the Portage River to fish some rock and rip rap. That did not go well either with me only catching a small limit. So Saturday night I decided I was going to go do what I had planned on doing from the beginning. Sunday morning I launched from a small kayak launch on the far west side of West Harbor.“

“I decided to leave my electronics, motor, and Power-pole behind in the truck and just go out fishing. I didn’t have any specific spots to go to, so I decided to use the 30 minutes we have between launch time and lines in to paddle as far east as I could and then fish my way back towards the launch throughout the day.”

“The morning started off cloudy and foggy so I didn’t think the flipping bite would be on yet and started throwing a jackhammer around the edges of the pads and grass. This got me my first keeper at 17″ quickly but then I never got another bite on it. After slinging the jackhammer around for about an hour and a half I decided i would go and give flipping and punching a shot. I pulled up into the closest set of pads and within 5 minutes pulled out an 18. I headed to the next set and this is where the magic happened for me, I started off with another 18, then a 16.5, then a 17.25. This gave me a limit of 86.75 and I thought that was probably about all I was going to be at to put together. Then about 5 minutes later I saw my line start to swim off to the side, set the hook, and out came my 20.25, which was bigger than anything I expected to catch in that area.”

“After that I caught 1 more upgrade in that set of pads and a few smaller fish that didn’t help. For the rest of the day I just went from 1 clump of pads to another flipping through them with a 3/4oz tungsten weight and a 4 inch black and blue Berkley pit boss. I managed to catch 1 more upgrade later in the day but didn’t get another bite other than that. The one thing that really made Sunday so great was that I didn’t lose any fish or miss any bites which does not happen often when your fishing thick cover and this is what allowed me to put up such a good limit. Last year I finished 3rd doing the same thing as I did to win this year, only last year I did lose a couple of key fish that could have potentially put me at the top. And that was the biggest difference for Sunday, that every bite I got came in the boat.”

About the angler: Nate Hall is sponsored by  Performance Kayak

All weekend long, the Farwide KBF TRAIL Angler of the Year race also played out on the AOY leaderboard. Several anglers in the top 10 were looking to improve their points, among them Kristine Fischer, Jody Queen, Casey Reed, Matt Kiefer, Ryan Nye, Cody Milton and others. Rus Snyders, the current leader, was one of them. Fischer and Queen would finish in the top 10 on Saturday, adding a twist to the race, and Queen’s 3rd place finish on Sunday reinforced his position as the new points leader.

With 2 KBF TRAIL weekends remaining, it is becoming apparent that the final events at Clear Lake, CA and Kentucky Lake would determine everything.

KBF wishes to thank Ryan Havlicek for his tireless work to help run the event. Ryan and the Buckeye Kayak Fishing Trail were outstanding in their support for the event, as was Fishermans Central (Port Clinton, OH), who hosted the awards ceremony and provided extra prizes to competitors. 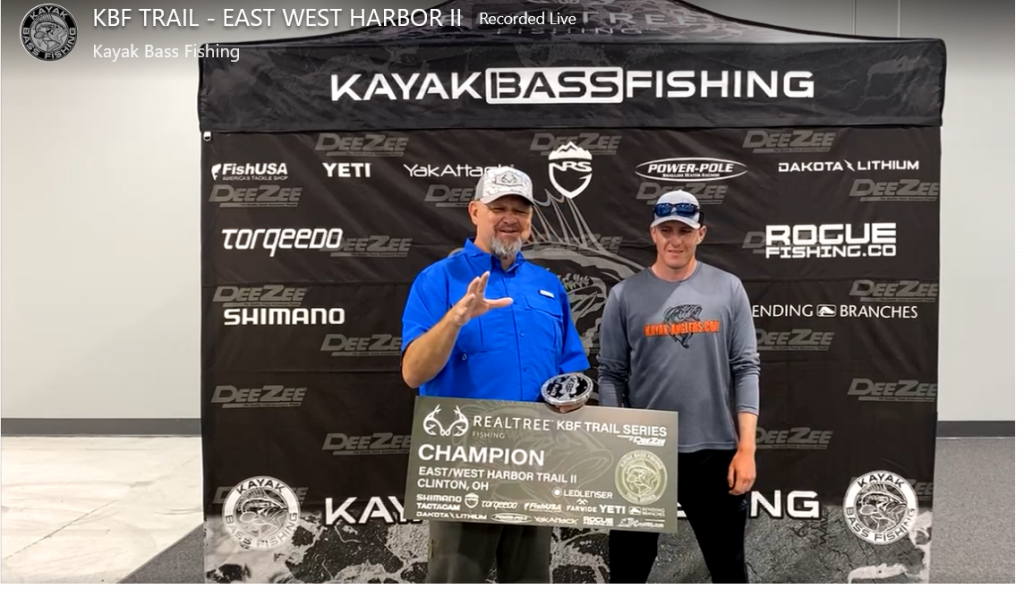