Nye Holds on to Win KBF TRAIL at Candlewood

The Realtree Fishing #KBFTRAIL presented by DeeZee visited lakes Candlewood and Lillilnonah on May 22-23rd as anglers chased giant Smallies, Largemouth and precious AOY and ROY points. When the Saturday event was over, Ryan Nye would build on two 4th place finishes at the Potomac River KBF TRAIL events, and take a share of 2nd place in the KBF TRAIL series AOY standings. But it wasn’t easy, and he had to hold off a late rally from New York’s Tricia Angelini Luciano, a KBF veteran who like Nye has assembled an impressive resume’ for the 2021 season.

The Fishing Chaos leaderboard was busy from the start of competition, an expected result, as pre-fishing on the lakes had been fantastic all week long. In the early going, 2020 KBF National Champion Matthew Conant was in the top 3, and Dee Zee Truck Accessories The TEN champ Jody Queen was in the top 10. But fortunes changed as anglers battled for position, and at the halfway point Chris Gomes had the lead with a 90.5” limit. At that point, Ryan Nye had 3 fish, but they were big, and he was in 7th with 58.5”. And Angelini Luciano, who had 51”, would save her best for the second half.

Nye climbed into the lead at mid-morning with 94.25”.   He  would spend the rest of competition time looking for a kicker to seal the win. In the meantime, Angelini was quiet. Nye would find that kicker fish – a 20.25” Smallmouth Bass, just before noon. He had the overall lead with 97.5”.

In the end, Nye’s limit proved to be enough. There would be no last minute surprises, only the tense expectation of a close finish that saw the top 5 separated by only 2.5” of big northeastern bass.

Nye credits a good week of scouting water for his victory, targeting bedding fish and adapting to pressure on the lake. As he described it:

“I pre-fished Wednesday out of Latins Cove saw some fish on beds and had a good feeling the whole lake would be this same way. After I got off the water Wednesday I learned that Squantz boat ramp was open to launch so I spent Thursday and Friday pre-fishing that area and day 1 of the event launching from there.”

“On Friday of pre-fishing I went and marked 2 better fish on beds and had a bunch of beds marked of fish I had found on Thursday as well. I started tournament day on one of these beds and caught that fish fairly quickly. I then ran to the next bed and caught that one. I thought I would just have to keep running to beds I had marked and catch my fish that way. By the time I got to my 3rd fish the big boats had begun to start taking some fish. I got my 3rd one on a bed and realized every boat wanted to sight fish so I tried to do the opposite. I went to a shade bank with docks where I saw fish late Thursday in pre-fishing. The only problem was without the sun I couldn’t see them. So I blind casted a 1/4 oz Texas rigged craw around anything I thought they might be spawning on. It seemed that most of these docks had chains with concrete blocks holding them in place on all 4 corners. Those back 2 blocks were sitting in about 5-8 feet of water and being in the shade those fish were nearly impossible to see during tournament hours. I only saw 2 boats on that bank with me and not for very long periods of time. I ended up pulling 3 fish from this small area that would end up helping my limit. I caught a lot of fish on that bank but nothing else to cull.”

“So late in the day I ran to one last bed in effort to cull an 18.50. I knew this fish was at least 19. I worked this fish and got the bite. Going to net the fish my line breaks at the last guide of my rod. The fish was jumping trying to throw the original bait and never really locked back on the bed. So I left that area late in the day and assumed that was it. Lucky I didn’t end up needing it.” 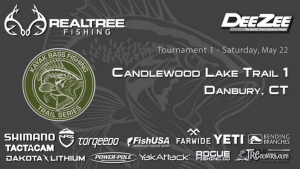 The KBF TRAIL on Candlewood-Lillinonah was hosted by Danbury, CT.