If you have ever watched a cycling competition where the cyclists travel in packs, that might represent the fishing this past weekend at Messalonskee.

Lake Messalonskee is a relatively small lake, but it fished big for the large crowd of KBF and Elite Kayak Fishing competitors who registered for KBF Trail and KBF Pro Series tournaments there on May 21-22, 2022. How big? The top 10 on Saturday averaged over 18” per fish; on Sunday, it was the top 12. To find an angler who averaged fewer than 17” per bass, you had to scroll down to 23rd place in the Saturday standings; on Sunday, it was 29th place. Generally speaking, those are the sort of numbers that put anglers in contention to place in most events. For Northeastern waters, those are phenomenal numbers.

The big limits also meant that every cull and upgrade mattered. At Trail I, only 4” separated 1st place from 10th on the Ledlenser leaderboard. At Trail II, only 3.25’ separated 12th from 1st. Whoever held first place at any time had the entire top 20 within striking distance at any point in the day.

How did anglers wage the war of inches? The champions describe their techniques and strategies below….

On Saturday Morning, Nick Audi, Robert Bifsha and Jacob Stern were the first anglers to post limits of 90” or more. They had don so by the mid way point of the event. But earlier in the day, dozens of anglers had already posted limits of 80” or longer. The question by mid-day was “Which angler will break free from the pack?”

But with every cull, several anglers culled too. At 11 am, for example, Ryan Matylewicz was in 3rd with 91.25”. At 11:02 Jake Angulas passed him with a tie breaker for 91.25”. In the meantime, Bifsha had upgraded to 92.25”, only for Matylewicz to pass him slightly later. Leapfrogging by a quarter inch at a time, the pack stayed close to Audi right to the end as Trail I went to the wire.

In the end, Audi prevailed for his first KBF Trail victory. This is how he did it:

“I didn’t pre-fish prior to the event,” Audi said. “I did map study quite a bit and looked at the northern islands on the lake. I decided to get away from the pressured fish on beds, so on Saturday I used my new Dakota Lithium 135 amp hour battery to cover water. I fished pinch points off shore with a Berkley Max Scent drop shot rigged with a Swagger tungsten weight. On Sunday, Ryan [Matylewicz] and I switched it up. I fished closer to the beds while Ryan fished off shore. I ended up finishing 7th, and earning 2nd place in the Pro Series in the second Trail.”

Audi added “I finally closed out with a win after coming close a lot of times.”

Close – it was the theme of the weekend. 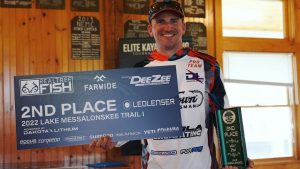 By the end of the day on Saturday, Ryan Matylewicz had taken 2nd place in the Trail event and had a commanding lead in the KBF Pro Series. By mid-morning on Sunday, Matylewicz was again in a dog fight for the lead in Trail II. This time, the angler ahead of him was Adam Petrone.

Petrone had finished 24th on Saturday with a good limit of 84.5”. But he came out of the gate on fire Sunday, posting 91.75” after two hours of competition. Again, the pack was on his heels, and again he upgraded to 92” at the mid-way point. Just as with Saturday’s grind, anglers were stacking limits behind the leader, each of them one big cull from taking over first place.At pne point in the late morning, Ryan Nye passed Petrone by 1.25”. Petrone was on second with 92”, Nye in 1st with 93.25”. Roughly one hour later, 2 anglers wedged their way between Nye and Petrone. By the end of the tournament, 2 had become 4. Every fraction of an inch was contested, and every fraction mattered. In the end, Nye’s limit held, and he brought home his second KBF Trail win of the 2022 season.

Nye accomplished the feat by bed fishing and rotating through 3 baits. In an exclusive interview, he described his weekend:

“I fished Messalonskee 2 years ago for the KBF regional championship, but only for about half an hour, and then I went to the other lake. When I got here Monday, I had four days to figure the lake out. In the end, I spent most of my time marking beds, because I never found an off shore bite in practice.”

Nye finished in 8th place at Trail I on Saturday, where he was 1st angler out of the money. On Sunday, the difference between 8th and 1st came down to two culls:

I caught that 20.25” on a white Rage Menace rigged on a 3/0 flipping hook My other baits were a ¾ ounce Mega Bass pre-rigged swimbait and a Beast Coast football jig. Those were my primary baits I cycled through. I think the swimbait was the key, because it showed the fish something different.” 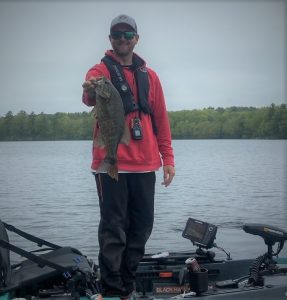 With his second KBF Trail win of the year, Nye improved to a tie for 2nd place overall in the Farwide KBF Angler of the Year race.

Snow Pond Center for the Arts provided additional support for this event.

Next up: The KBF Trail and Pro Series will visit Pineview Reservoir in Utah on June 4-5th, and will then return to the Northeast for a weekend at Lake Champlain on June 11-12.