In 2022, Kayak Bass Fishing has tripled down on growing our sport in the western United States, bringing a total of seven KBF Trail and Pro Series tournament weekends to Utah, Colorado, Arizona and California. California hosts 4 of those KBF weekends, and the second set of the season’s California events was held April 23-24 at San Vicente Reservoir, a scenic fishery in San Diego county.

The Realtree Fishing KBF Trail is presented by Dee Zee Truck Accessories and Powered by Dakota Lithium. The tournament sponsors provide support to KBF and its anglers, as well as additional bonus prizes (for example, the Dakota Lithium Big Bass leaderboard). Return the favor and purchase their products.

In short, there is a lot to compete for!

The weekend forecast for San Diego County showed light winds, mild temperatures and blue bird skies. In fact, the forecast for Saturday and Sunday was nearly identical, with Sunday the slightly warmer day. Those are the conditions that require stealth in California’s clear water lakes as well as a subtle presentation to bass that may still be spawning or guarding beds. Conditions like those usually are a sign that fish would be few and far between, as the lake mirrors the sky and every movement ripples the glass.

KBF competitors quickly learned that San Vicente was not going to be stingy. And just like the weather pattern, the anglers had similar days of tight leaderboards and close finishes. In fact, that two days were nearly mirror images – with a twist at the end.

Two hours into Saturday’s competition time, more than one dozen anglers had posted scoreable bass. Steve Buechner took the early lead, while Lance Engel and Gilbert Garcia filled out the top 3. Within 30 minutes time, several limits were filled, as Dominic Doan took over the lead with 79.5” and Gilbert Garcia moved into second place. Garcia had placed well at the KBF TRAIL at Arizona’s Lake Roosevelt in late March, and was battling for AOY points as well as prizes.  Dominic Doan, who fought hard to remain in contention all weekend long, rounded out the top three.

Within the hour, the standings all changed again. Gilbert Garcia dropped to 7th place, Bryce Gibbs moved into third and Doan upgraded to second place. The new leader was Daigo Koyabashi, who held a .25” lead over Doan at the halfway mark. Clearly, San Vicente’s bite was heating up as the morning progressed, and no spot on the leaderboard was safe. Doan would retake the lead in the late morning with an 86.25” limit.

That was when Tim O’Connor posted a big limit to take the overall lead. It would hold, but John Myers, who had been hovering on the edge of the top 5, made a run. He would finish in third overall. In the meantime, Doan and O’Connor had set themselves up to battle for the top spot in the Pro Series, with Bryce Gibs and Anthony Garcia close behind. 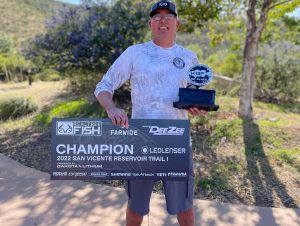 Sunday dawned with nearly identical conditions to the previous day, and if you looked at the leaderboards early on both days, you would have noticed that Steve Buechner found the early bites. He led with a limit of 76.50” after two hours. And again, as on Saturday, the fish came in as the water warmed. Trail I contenders Myers and Kobayashi were joined by Shane Lemmon and Adam Garcia in the top 5. And just like Saturday, Doan had taken the lead at mid-day. Doan held the lead, and as time wore down the top 10 tightened considerably. With about one hour left to fish. Doan topped the board with 85” and Mario Galaviz was in 10th place with 80”. Only 5” separated 1st place from 10th.

Late limits again changed the leaderboard. Everything was set up to be a Largemouth bass version of Groundhog Day, with Buechner leading early, Doan at the mid-day lead and O’Connor posting a late bag. But San Vicente was giving up more fish to shatter the mirror image of the previous day.

In the end, spots 2-5 were separated by only 1.5”, Bradley Kuhlin’s late surge gave him second place, while Doan fell to third and O’Connor held on for fourth. Anthony Garcia finished with fifth place.

Shane Lemmon emerged the victor after posting the weekend’s biggest limit, a 90.75” bag that included a 20” tank for an anchor fish.

On the Pro Series side, Dominic Doan had battled hard all weekend long, finishing 2nd on Saturday and 3rd on Sunday in the KBF Trail events. He lost to O’Connor on Saturday by .25”, but bested him by .50” on Sunday. The difference of .25” was enough to earn Doan the Pro Series win.

Looking Ahead: West Coast Anglers Gilbert Garcia and Anthony Garcia occupy the top 2 spots in the KBF Pro Series points race. On the Farwide AOY leaderboard, Anthony Garcia is joined by Cody Henley and Bryce Gibbs in the top 10. In short, the West Coast anglers have shaken up the standings, with several anglers in contention for spots in Dee Zee KBF The TEN even as they rack up points ahead of the Trail Series Championship on Kentucky Lake.

Several events remain in the western swing of the KBF TRAIL. Chatfield (CO) is up next, followed by Pineview (UT) June 4-5 and Lower Otay (CA) on June 25-26. The final western KBF TRAIL event of the season will be on Clear Lake (CA) in August.

The next KBF TRAIL weekends will be April 30-May 1 on Lake Guntersville (AL) & Chatfield Reservoir (CO).