Queen and Gonzalez post historic numbers at Fort Worth

The Trinity River system was a question mark to KBF competitors, but over the course of a historic weekend of KBF TRAIL competition, its lakes answered those questions. For two competitors on the first day of competition, those answers had exclamation points.

If you have followed the kayak fishing careers of Jody Queen and Guillermo Gonzalez, you will know they have had success at every level of the sport. In what turned out to be a historic day on the KBF TRAIL, Gonzalez would need a miraculous final hour – to beat Jody Queen and win the Realtree Fishing KBF TRAIL presented by Dee Zee Truck accessories on the Trinity River system this past Saturday, April 10.

The morning began with Bradley Kuhlin (64”), Jeff Penny and Kristine Fischer in the top 3 spots. The big fish were not yet biting, however, but we knew what to expect from the Texas waters surrounding our venue hosts at the Fort Worth Sports Commission.

The BucketMouth Brand Big bass leaderboard lit up with massive bass at mid morning, as Jody Queen, Kristine Fischer, Katherine Field and Matthew Scotch all posted huge bass. By mid-day, Scotch had built a 9.5” lead over his nearest competitors Kristine Fischer and 2018 KBF National Champion Dwayne Taff. For a while, Scotch’s 102” limit seemed insurmountable, but this was Texas, and both Guillermo Gonzalez and Jody Queen were about to surprise everyone.

With 2 hours remaining, Jody Queen had a 88.25” limit and was 14.5” behind the lead in the standings. And then, the big bass upgrade happened, and another, and then he posted a 25” monster. Not to be outdone, Gonzalez, who was 4.25” behind Scotch, also began hooking into giants. Over the final quarter of competition, Queen culled and upgraded over 20”. It was astounding, and he posted a 109” limit. 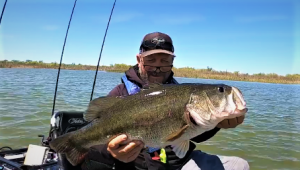 Gonzalez would however have his prayers answered, too, culling and upgrading 12.75” during that same period. On any other day, it would have been a dramatic comeback. On this day, it was all the more impressive because it bested Queen’s tremendous move up the Fishing Chaos leader board.

Following the event, Queen noted that he was fishing in the middle of Eagle Lake: “Those big bass had pulled up and were spawning in those reeds. The water was muddy, and I was working the edges and throwing back into the reeds as far as I could. At the end of the day, the wind had blown some clear water in from the middle of the lake.”

“My first thought was whether I should keep fishing there, or save it for the next day (Sunday). Kristine (Fischer) came by and shot a video of my 25” bass, and she and Guillermo and I were all fishing the same area. I didn’t know what the board looked like, and then my wife called and told me Guillermo had upgraded, all in the last twenty minutes or so, out on another reed bed in the middle of the lake. The numbers of the fish were blowing me away. My first reaction was ‘I don’t care,’ because it was such an epic day. I felt like I won the tournament even though I didn’t win it.”

In the final tally, Gonzalez and Queen combined for 219.5” of Largemouth Bass. By most standards, that is roughly a 6.5 lb average per fish, but as they were spawning bass with eggs to lay, they may have been heavier. It would be fair to estimate that by most standards in competition by weight, that Queen and Gonzalez weighed in bags that were over 30 lbs each.

But this is kayak fishing, and we measure the fish by length. If you measured them out in a line, that’s over 18 feet of green and just a fraction shy of a 22” average per fish. 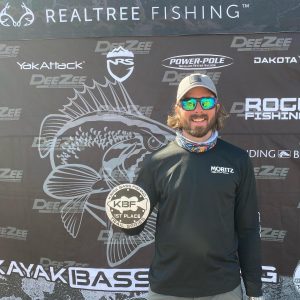 No matter how you measure it, Queen and Gonzalez posted historic days, establishing the 2nd and 3rd biggest single day limits ever caught in KBF history.

To view the complete standings: https://app.fishingchaos.com/tournament/2021-realtree-fishing-kbf-trail-trinity-river-i-presented-by-dee-zee

The Realtree Fishing KBF TRAIL presented by DEE ZEE on April 10-11, 2021 is hosted by Forth Worth Sports Commission. For more information visit: https://www.fortworth.com/sportscommission/