When asked about the state of the sport out west, up and coming anglers Cody Henley and Caymen Rasmussen shared the same view: it’s growing, and growing fast. Henley noted: “We will get to where the South is one day. It will take time. But we had 77 anglers register to fish with out local club [in Utah] this weekend. Two years ago, we only had 25.” Rasmussen added: “There are a lot of anglers here who are new to the sport. Not all of them will travel long distances to fish tournaments – not yet.”

Hopefully, that new generation of west coast competitors are paying attention to what Rasmussen, Henley, Bryce Gibbs and Gilbert and Anthony Garcia have accomplished this season, because they’ve driven as far and fished as hard as anyone in the country, and they have the trophies and prize money to show for it. This weekend at Pineview Reservoir in scenic Ogden, Utah they proved once again that they are the standard against which to measure the growth of kayak fishing excellence in the western U.S.A.

Cody Henley is a Utah based angler, and he knows Pineview well. He doesn’t hold it in high esteem, however, because of the challenges it presents. For example, during pre fishing in tournament week, it snowed there.

“Pineview is one of the lakes I hate most in Utah. You either skunk or slay them – there is no in between. It snowed there Monday and Tuesday. The air temperatures went from 32 degrees at night to the 80’s during the day, and the water temperatures finally reached the low 60’s later in the week, so the fish started pushing up on the banks.”

Henley won Trail I by jumping out to a strong start. He landed a limit of over 70” within two hours of lines in, while the rest of the field still had only 1-2 fish each. As the day progressed, however, Caymen Rasmussen, Bradley Kuhlin and Bryce Gibbs closed in on him, but Henley continued culling fish, and had increased his limit to 87” by mid-morning. Rasmussen stayed close behind with 83.75”, however, while Gene “Flukemaster” Jensen also made a push, climbing to 85.5” after the noon hour.

In the end, Henley won with a combination of techniques. He said “Saturday was perfect. I caught a topwater largemouth and everything else came off beds.” If the bass missed his Megabass Popper, he would follow up with a chatterbait and they would eat it. 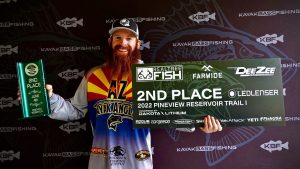 Henley began Sunday with the lead in the KBF Pro Series, but struggled early. “I couldn’t find fish, but later I found fish that pushed up to spawn.”

The early lead belonged instead to Caymen Rasmussen, who knows the lake well.

“I fish Pineview quite a few times every year. It’s a pretty lake, and at a higher elevation than the Salt Lake Valley. It’s one of the top 3 Smallmouth lakes in Utah, but we had a late spawn, so that was the bite. The Smallmouth spawn on hard bottom or rocks, but it’s a sandy lake mostly. There are only a few areas to fish for the spawning bass.”

I started Sunday with a ned rig, with either a swimbait trailer or just a stick bait on it. My other technique was a drop shot with a 4” wacky Senko.”

Rasmussen began the day with an 82” limit while other anglers, including Henley, Kuhlin and Charles Booth were still looking for limits. Rasmussen upgraded to 86.25” in the late morning as other anglers, including Henley, Gibbs, and Jensen began to close the gap. In the end. Tyler Ivie also made a push, but Rasmussen extended his lead to 90.5”. As a result, he won Trail II and passed Cody Henley to take the Pro Series victory. It was Rasmussen’s second Pro Series trophy and second Trail win of the 2022 season.

Up next: The Realtree Fishing KBF Trail and Pro Series will next be at Lake Champlain on June 11th – 12th. On June 25th-26th, the final double-header of the season will take place. KBF competitors will fish on Percy Priest (TN) and Lower Otay (CA). 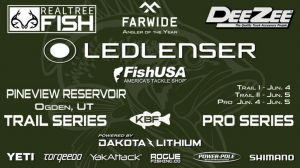