A new year brings a new tournament season, and the 2021 competition year began with fireworks on the Kissimmee Chain.

145 anglers registered to compete on Day 1 of the Realtree Fishing KBF TRAIL presented by Dee Zee at Kissimmee, Florida on Saturday January 30. On Sunday, January 31st, 131 anglers fished Day 2, a separate event. All of them were beginning the 2021 KBF tournament season in the hunt for cash prizes, AOY points and ROY points, as well as points in the KBF Challenge Series presented by FishUSA.

In a dramatic weekend of big prizes, big wins and even bigger bass, KBF anglers picked through hydrilla and wind swept water to find their bites, posting some massive pre-spawn Florida bass to the leaderboards along the way. In the end, two separate KBF TRAIL champions were crowned – one, a familiar name, the other new, but from a region that has been making noise. 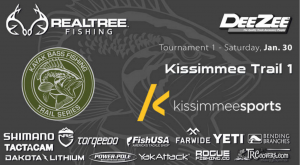 The KBF TRAIL I leaderboard woke up slowly on Saturday morning after a minor cold front passed over Central Florida. At the end of the first hour at the Kissimmee Chain, Greg Hurt held the lead with a 3 fish limit of 49.5” and 21 anglers had posted a scoreable fish.

And then it began to warm up. Alan Reed landed a 4th fish to post a 52.5” limit, and then he was passed by Gene “Flukemaster” Jensen with 59.75”.  Soon after, Eric Jackson posted a 4 fish limit of 60” to take over in 1st place. And near the bottom of the hour Alan reed posted his 5th fish, and the first limit of the day, to seize first. But it didn’t end there – moments later, it was Eric Jackson who filled his limit and took back the lead with 72.75”

Jackson would fight his way up the leaderboard repeatedly all day long, even as larger limits began to post. And also larger fish. As the water began to warm, KBF anglers found some huge bass. It began with a 23.75” landed by Josh Stewart, then a 22.50” landed by John Warchol, and then a 24.75” giant that was landed by Danny Gann. 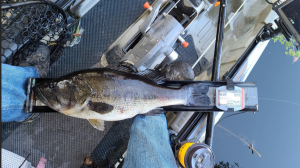 Ferreira’s lead would hold, even as Dennis Campbell, Matt Kiefer and others climbed up the leaderboard. At the end of the day, Ferreira was the 1st KBF TRAIL Champion of the 2021 season, adding yet another trophy to the impressive list of hardware collected by anglers from the Northeast during the past calendar year.

Ferreira described the his strategy as follows:

“With it being The Kissimmee Chain I knew I would be flipping some sort of vegetation. And it can be like finding a needle in a haystack. So I did everything I could do to avoid that haha. I found a spinner bait and frog bite in a whole section of sparse Kissimmee grass, so I didn’t have to resort to flipping spatterdock.”

Ferreira took the opportunity to describe the moment and also look ahead to the next KBF TRAIL event:

“When 4 o’clock came around and my name was still at the top of the leaderboard, it kind of felt like… like… I don’t know. It’s still so surreal. It’s something that was on my bucket list. I’m sure it will set in soon enough but for now when I think about it I just kind of giggle, you know? I just hope I can use this momentum and bring a win at Murray back to good ole Massachusetts.” 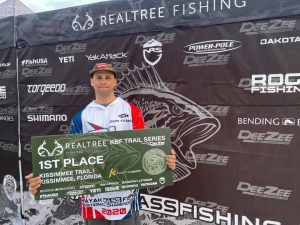 The top 10 anglers who placed were as follows. Complete results can be viewed here. 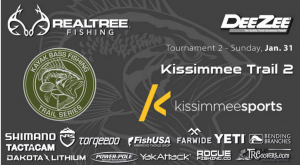 The Realtree Fishing KBF Trail presented by Dee Zee opened its season on Saturday in Kissimmee, Florida. When it was over, John Ferreira was the first angler to become a #KBFTRAIL champion for the 2021 season. Who would be the second?

THE KBF TRAIL I Saturday leaderboard featured several prominent names in our sport. 2019 KBF National Champion Mike Elsea, 2020 KBF Angler of the Year Rus Snyders and kayak fishing juggernaut Jody Queen all finished in the money. The KBF TRAIL II leaderboard would open with another name that looms large in KBF history.

When the first limits came in on Sunday morning, 2016 KBF National Champion Matt Ball was only .25” from Jimmy McClurkan’s 1st place limit of 81.25”. Tim Isaacs, Darrell Harrelson and Tate Schwab rounded out the top 5, with North Carolina’s Eric Nelson, a 2020 Regional Trail Champion, in 6th place, but only 1.75” from jumping over 3 anglers into third place. The previous day’s early leaderboard had seen anglers leapfrogging each other by large margins, but Sunday’s leaderboard was tight from the start. Sure enough, Nelson briefly vaulted to 3rd place.

It remained that way as anglers battled back and forth. North Carolina’s Cory Dreyer made a mid-morning push into the top 5, and appeared to be contending before fading back into the field (at one point, the top number line on his Ketch Karbonate measuring board saved Dreyer from having a fish denied because the fish tail and ID holder had covered the other numbers).

Later still, Indiana’s Matt Kiefer surpassed the field with one hour left to fish. With a 92” limit, his lead was fragile because 2020 KBF Angler of the Year was right behind him with a 91.25” limit. 2019 KBF Rookie of the Year Derek Brundle sat in 3rd place, tied with Snyders by overall length (but Snyders had the tie breaker with big bass). Gene Jensen and Seth Nieman rounded out the top 5 with limits in the high 80’s as the field made its last casts of the day, hoping to break through to the top spot.

Would a big late limit come in? Who would walk away with the event’s precious Angler of the Year Points? Would anyone post a bass that longer than Doug Wilson’s 23.25” monster?

In the end, a monster did show up, a 23.50″ toad landed by Jody Queen, but it was Rus Snyders who prevailed. A final upgrade put an 18” bass on Snyders’ leaderboard, allowing him to take sole command of 1st place in the final hour, sealing Snyders’ 3rd KBF TRAIL victory during the past calendar year.

The Top 10 in the final standings are below, and full event standings can be seen viewed on Fishing Chaos.

The Realtree Fishing KBF TRAIL presented by Dee Zee will make its next stop at Lake Murray, South Carolina on February 27-28, 2021. Sign up is open on Fishing Chaos!