Guntersville. The lake’s name has a certain ring to it, a gravitational weight. It sounds heavy, like its big bass.

Gravity has a force and a momentum. Things don’t just fall or get pulled by it – sometimes, gravity changes their course so things break your way. This weekend at Guntersville, it was the breaks – current breaks and that extra, last-minute cull – that mattered for both Eric Siddiqi and Dylan Lowery, as both of them battled their way to big paydays.

When things break your way, they really break your way. And for Ohio kayak angler Eric Siddiqi, nearly everything has gone his way in 2022. It began with a win at the B.A.S.S. Nation Kayak Classic in February. In March, he didn’t catch a limit on day 1 at the Hobie tournament at Santee Cooper but still earned a check (and also won a local trail in which he double dipped). And this past Saturday at Guntersville, he won Trail I on a big fish tie-breaker for his first KBF TRAIL victory of the season.

Luck doesn’t make itself, and Siddiqi had to put in extra pre-fishing time to find unpressured fish. We will let him tell the rest of it:

“I pre-fished for 3 days. First I scouted a road bed and some shallow areas, but I didn’t see a deep pattern there to convince me fish were moving back and forth. The spot I checked on day 2 had too many anglers near it, and when you pull up and see Jody Queen, Cory Dreyer and Cody Milton around, you know it’s gonna be tough to fish there. I found some spotted bass there, too, but felt it would be pressured.

On the last day of pre-fishing, I went to another busy launch, and it seemed every pocket and point had a boat or kayak on it. So I looked at the main lake on maps and decided to go scout some docks. I found more bass there than anywhere else, and I decided that was where I would start.

On Saturday, I was fishing areas based on notes and way points. I didn’t sight fish because I didn’t want to stand and spook fish. My notes said things like “cast between the third and fourth pylon at this dock” or something like that. I just flipped into an area and they would eat it.

I caught my first bass, an 18” plus, on a jackhammer. The second came on a Senko. I then saw a big one swimming around some old tires, and she was a 20.5” that ate a Senko. I probably caught 20-25 fish. I saved a few for the next day [Sunday], but when I went back I noticed the wind had blown loose eel grass and branches in there so it was hard to fish with the wind blowing in. So I went around the corner and fished some rip rap near a break in the wind current. I switched between a Swimbait and a Senko, and caught 20-25 fish there. I fished hard because Cody Milton and I were tied, and I managed a .25” cull late on Sunday to clinch second place in the Pro Series.”

Two-tiebreakers – one courtesy of a Guntersville tank that delivered him the win on Saturday, the other courtesy of Siddiqi’s experience in knowing when to adjust to conditions that gave him 2nd place in the Pro Series on Sunday. It’s been that kind of magical year for the long time KBF competitor.

Dylan Lowery has been fishing KBF tournaments since 2017, and kayak fishing for even longer than that. And when work obligations limit your time to pre-fish, the experience helps. And so does a tip from a friend who informs you of a good spot. But that wasn’t the break he needed – what he needed was to figure out how fish oriented to a current break, and also wait them out when the fish took a break from feeding. In Lowery’s words, this is how he won the Sunday KBF TRAIL II and also the KBF Pro Series:

“I didn’t pre-fish, but got some advice from a friend about where to fish up the river. There was a current swing against a rock wall, and I caught all my fish there on a 5” Suicide Shad by Big Bite Baits that I threw on a 7’4” Medium-Heavy Douglas Matrix Series rod. On Saturday, they ran the west generator, and I caught fish all day. I lost a 5 pound Smallmouth and what looked like a 7 pound Largemouth there, too. If I had landed those fish I would have swept the weekend events.”

Lowery’s limits consisted of huge Smallmouth AND Largemouth Bass. His best Largemouth measured 22.25”, enough for first place on the Dakota Lithium Big Bass leaderboard. His 20.75” Smallmouth held the top spot for a time on the Saturday Big Bass Leaderboard, too.

Sunday’s big bites, however, were few and far between.

“On Sunday, I had to wait for bites. They were running the East generator, so the current wasn’t there. I had to wait for hours for a barge to pass through the lock. The water they pumped out of the lock would fire up the bite, but I could only catch a couple of fish each time. The current would stop running by the time I measured and photographed fish. It was boring, to be honest, waiting out those breaks.”

In the end, Lowery’s patience during the breaks earned him the Sunday Trail victory and also a 1st place finish in the KBF Pro Series. 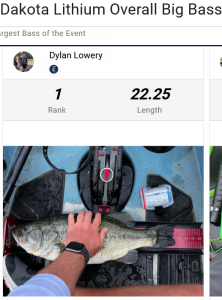