The Realtree Fishing KBF TRAIL and KBF Pro Series presented by Dee Zee and Powered by Dakota Lithium expanded its west coast itinerary to five event weekends in 2022. The 2021 season saw exciting new names like Caymen Rasmussen, Daniel Balaba and DEE ZEE THE TEN champion Cody Henley emerge from KBF’s west coast ranks. Clearly, there is no shortage of hammers out that way.

And there is one more name on that list after an exciting weekend at Folsom Lake, but Chris Spencer is no stranger to the KBF TRAIL, as we shall see. After this weekend, Utah’s Chris Spencer has emerged as one of the early favorites in the Farwide Angler of the Year race. The other is South Carolina’s Jason Broach. With KBF TRAIL events on Lake Murray (SC) and Roosevelt Lake (AZ), these two anglers each has a chance to assert further control over the AOY points race in the coming weeks.

The Realtree Fishing #KBFTRAIL I presented by Dee Zee Truck Accessories began on a beautiful morning at Folsom Lake, CA, with forecast temperatures in the 70’s. Located in the Sierra Nevada foothills outside Sacramento, the lake covers 11,500 surface acres of water, and is well known as an excellent Largemouth, Smallmouth and Spotted Bass fishery.

Damien Thao was the first to post a fish, as he landed a 15.50” bass in the early minutes of the tournament, but then the leaderboard quickly started to populate with bass. The first angler to post a limit was Chris Spencer, who took over first place in the 2nd hour of competition with five bass for a limit of 82”. Behind him, Daigo Kobayashi was working on a limit in 2nd place. By the mid-way point of the tournament Spencer had upgraded to 83.5”, but Kobayashi (then in 4th with 77”), Jinno Magno (78.25”) and Danny Miller (79”) were threatening his lead.

Spencer, Magno and Kobayashi also held the top 3 spots on the Dakota Lithium Big Bass leaderboard, and the tournament entered its final hour with potential for an upset if an angler could surpass Spencer, who held the lead for most of the day.

It was close in the end – as close a finish as they get. Magno and Miller posted small upgrades and Damian Thao also filled a limit to make a bid for the win, but another angler appeared in the top 5. It was Jiangbo Zhang, who with a final total of 83.25” came within a quarter-inch of catching up with Chris Spencer. Zhang did so courtesy of a 20” toad that took the top spot on the Dakota Lithium Big Bass Leaderboard, but despite his big fish it was Spencer’s limit that held on for the win – barely – in the exciting photo finish.

Spencer described his pre-fishing leading into Day 1 in an exclusive interview with KBF after the win:

“I pre fished for two days and spent 80% of the time graphing and another 20% fishing. That helped me eliminate water and located active fish. I hadn’t fished a KBF TRAIL since 2020, when I won 1st place at Roosevelt Lake. The Day 1 morning was a rush, with over 100 anglers (KBF and Yak-A-Bass) leaving form a single launch. It was cool to see.

My day started fast. I picked up fish early and even caught some doubles on a Donkey Rig. But I only caught a total of six bass the entire day. That Donkey Rig was the key, because it triggered bites on those pressured fish.”

On the Pro Series side, Spencer also was in first place at the end of day 1 of that two-day event, while Anthony Garcia and Gilbert Garcia held second and third places heading into Sunday. With their strong finishes, the top anglers earned valuable points toward the KBF Farwide Angler of the Year scores and set the table for the Sunday event.

The second KBF TRAIL of the season’s first west coast weekend began with Daigo Kobayashi taking the early lead (Kobayashi had finished in 6th place the previous day). Danny Miller and Patrick Wilson rounded out the top 3 in the early going as anglers began posting catches, but by mid-morning Chris Spencer, the Day 1 champion, had reappeared with a limit of 81.50” in the top spot. Other anglers began to post limits, and Ron Lewis climbed the board to 2nd place during the final quarter of competition, with a limit of 76”. Like the previous day, Spencer held the lead while others battled to catch him.

In the meantime, David Morris took over the top spot on the Dakota Lithium Big Bass leaderboard with a 20.25”. He was followed there in 2nd by Jiangbo Zhang (20”) and Chris Spencer (19.75”). 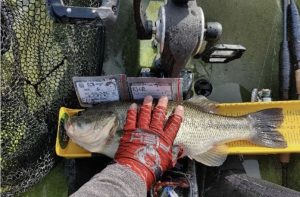 It was Jinno Magno who emerged as the primary challenger to Spencer as he posted a limit of 83.75”, but Spencer would upgrade and increase his limit by 4”. Damian Thao also surged, this time into 3rd place overall, but once again Spencer’s late upgrades held off a charge from other competitors.

As Spencer told it:

“Day 2 started fast, too, but I had company on the water. I started in the same area, but when the wind died the bite died too. I moved to looking for fish on submerged granite humps and boulders, fishing a drop shot. It’s like fishing cypress knees, but they are underwater boulders. You have to find the right one. The key for me was running Motorguide on my Native Titan. That was a game changer in the wind.

When it was over, it felt great to win because my 2020 season was cut short after I won the KBF TRAIL at Roosevelt. I’ll be back there next month, too.”

With back-to-back wins at Folsom, Spencer made a strong early case in the Farwide Angler of the Year standings. With Lake Murray next on the KBF TRAIL schedule, South Carolina’s Jason Broach will have a chance to reply and match Spencer’s scores; Spencer will also have an opportunity to hold serve when the KBF TRAIL meets on Lake Roosevelt (AZ) in mid-March.

A similar scenario is playing out in the KBF Pro Series. Spencer and Broach both hold perfect scores, winning one event each in the young season. Broach versus Spencer is setting up as an East vs. West rivalry, and will surely hold the attention of anglers over the coming month!