In 2021, Cody Milton and Guillermo Gonzalez averaged over 100” limits every day of the KBF National Championship, setting an absurdly high record for the kayak bass fisheries of the Shreveport-Bossier City Lakes.

It goes without saying that expectations were high when the KBF TRAIL and PRO SERIES came back to town on April 2-3, 2022. And Caddo Lake and other fisheries did not disappoint. 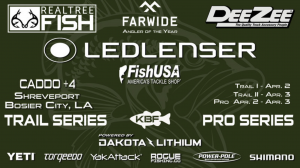 The early action on the Ledlenser leaderboard did not indicate a wild day ahead. After one hour of fishing, Mike Elsea was in the lead with 53”. The morning was cool and the bite was slow. And then, with in one hour, everything changed. And kept changing……Here is how it unfolded, hour by hour, from first to fifth place:

And then it got even crazier:

Josh Stewart took back the lead from Cory Dreyer, moments later, Anthony Garcia took over 1st place, and Cody Milton posted a big limit (94.5”).  Stewart had been dominant most of the day, and now Garcia would hold first place for several hours, with the help of a 23” bass he posted to the Dakota Lithium Big Bass Leaderboard. By the end of hour 5, Josh Stewart had dropped to 4th place overall, aas both Rolando Nandin and Cody Milton passed him.

But with one hour left to fish, Josh Stewart vaulted back into first place after posting a 1.25” cull. The top 5 anglers were separated by only 1.5”. Stewart’s final cull was barely enough: the standings closed with one of the closest finishes in KBF TRAIL history. The top 5 were, with final lengths:

That’s why the KBF TRAIL and PRO Series makes Shreveport, LA a regular stop. And that’s why the Pro Series Championship will be held there in 2023!

The dramatic finish was Josh Stewart’s 2nd KBF TRAIL win of the 2022 (he won at Lake Murray in February), and it’s a win that has launched his name into the conversation for Farwide KBF Angler of the Year. 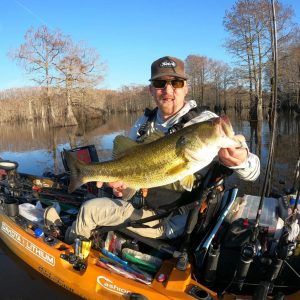 Old Town Pro Casey Reed had been catching good limits in practice, and wanted to finish strong. Sunday would start like he had hoped, as he jumped out to an early lead with a limit of over 90”. By mid-day, he had culled and upgraded his lead to 95.75”. Other anglers like Jeremiah Smith, Cory Dreyer and Kristine Fischer were hot on his heels, however, and he had to keep grinding.

With two thirds of competition time complete. 2021 Farwide Angler of the Year Cody Milton posted a limit of 102.25”. If Sunday played out as Saturday did, Milton and Reed would battle it out, but they remained in second and first, as the action shifted to the lower standings. There, Garratt Wade jumped into third behind Reed with 92”, while Jody Queen and Mike Elsea each surged late in the day, into fourth and fifth places respectively. In the meantime, Milton’s big limit sat atop the leaderboard…..

On the Pro Series side, Reed also had company. The overall weekend leaderboard saw Cory Dreyer take the early lead, tied with Kristine Fischer with 181” apiece. As the day wore on, Dreyer extended his lead to 183.5” as Reed climbed into 2nd place. Behind Fischer in 3rd, Anthony Garcia and Garrett Wade filled out the top 5. There too, however, Milton also took over 1st, courtesy of his massive Sunday limit.

In the end, it was the previous day’s champion Josh Stewart who made a run at Milton, posting a 96.75” limit to take second place in both the second KBF TRAIL and for the Pro Series weekend. Cody Milton had finished 4th on Saturday, but held on to 1st on Sunday.

“[On Saturday] I got to the boat ramp late because I thought the tournament started at 7 a.m., so I started late. When was headed to my area, I saw a camera light go off nearby and it was Kristine Fischer posting a catch. So I kept going to a spot where I had caught one fish in practice, and I stayed there all day.

“I went back to the same cypress trees on Sunday, when the tournament was supposed to start, and I caught a 22.75” on a Thumper Spinner Bait with a Colorado Blade. It was really dark for the first twenty minutes, and I couldn’t get a bite on that bait later. Everything else was on whacky rigs and stuff. Later, there was a good topwater bite, and caught some of my later fish on a black buzzbait  that had a gold blade when the water warmed up.”

The top 5 were, with final lengths:

Josh Stewart is on the Jackson Kayak Fishing Team.

Looking ahead: The Realtree Fishing KBF TRAIL and PRO SERIES visits the Potomac River on April 9-10 and then San Vicente Reservoir (Lakeside, CA) on April 23-24.