The Top Team Challenge Cup is the tournament within the KBF championship tournaments. It is the youngest championship event and also one of the most fun to fish and follow. In 2022, the teams included KBF AmBASSador Series Partners (LIKBF, CKA), new organizations to the event (V &M Buzzetta Realty, Reel Swede, Penny Outdoors) as well the major kayak industry sponsored teams (Yak Attack, Ketch, Old Town, NuCanoe, Torqeedo, etc).

The Kentucky Lake edition was the fourth Top Team Cup event, and for the second year in a row, Team Dakota Lithium won the Top Team Cup.

KBF held a group interview with team members Rus Snyders, Eric Siddiqi, Cody Milton and Garrett Wade. We let them describe each day of the tournament, and as you will see from the quotes, they had a fun time, experienced some misadventures, and made Craig Storms of Dakota Lithium Batteries a happy man. 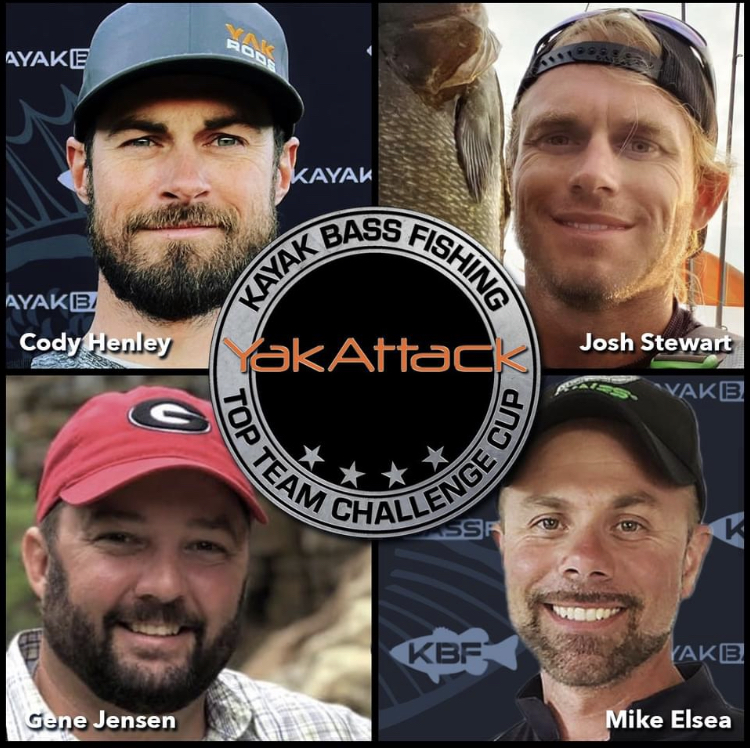 A tight race developed early on Day 1. By late morning, two teams were within 1” of the leading team, as Team Torqeedo had a 4 fish limit of 60.25”, while both Dakota Lithium and Carolina Kayak Anglers were tied at 59.25” However, with an average of 15” per fish, the top 3 were vulnerable.

Late in the day, V & M Buzzetta realty, a team comprised of LIKBF competitors, jumped into first place when their fourth fish gave them the overall lead with 64.25”. The team eventually improved to 65.5” Still, with an average length of just over 16”, the lead was only one big upgrade from changing hands again.

That’s when Dakota Lithium’s team took over first place on the Top Team Cup board. And they did so with emphasis. How? Because Rus Snyders posted his 97” limit, and his big bass of 22.50” shot the Dakota Team to the top of the leaderboard.

Here is how the Dakota team Members experienced Day 1….

Eric: “As team captain, I admit we just winged it. Everyone was good, and I figured we had it in the bag [laughs]….”

Garrett: “I wasn’t ooking at standings, because I got a good fish early. I caught a 19” first thing in the morning, and I was like ‘you’re welcome’ when I posted it. That turned out to be our smallest fish at the end of the day {laughs].”

Cody: “The cold front on Day 1 kept the fish biting. I caught an 18” and fell out of my boat while netting it, up to my neck. I swam to the bank and drained my waders. I then went back to the hole I just swam through and caught a 20”.”

Rus: “The water was so clear where I fished that you could see the bass. I had no signal, but I was expecting multiple bags over 90” I surprised mine was the only one.”

The Top Team Cup began with the Carolina Kayak Anglers  [CKA] team vaulting into the lead. They had ended in 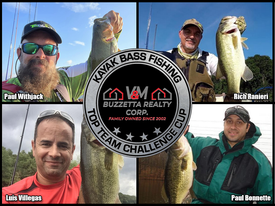 5th place overall after Day 1 but jumped to 1st place early on Day 2. Team Nu Canoe would pass them, while the Day 1 leader Dakota Lithium remained in third. That was how things stood near the halfway mark of the morning, the difference being that Dakota Lithium added a fish to close the gap  between third and second. Teams V & M Buzzetta Realty and Torqeedo filled out the top 5.

The race began to tighten, however. Teams culled and leap frogged over one another in the late morning. Team Enduro Power briefly vaulted into first place on the Day 2 leaderboard, and into third place overall, while V & M Buzzetta moved into second place. Team Nu Canoe had culled, and maintained a 5” lead overall.

Shortly before noon, Dakota Lithium took the lead, but then V & M Buzzetta posted a limit and jumped into first place. Team CKA had in the meantime dropped to seventh place, and Team Old Town had risen to eighth place.  But if either team filled their limit they could have vaulted into third place, and a big cull might have moved either one from seventh or eighth place into second or even first – that’s how close it was!

The Dakota Lithium team were far off the beaten path, and had to hurry back to check in or risk being disqualified. Here is how they told it:

Eric: “I didn’t catch a limit on Day 1 and we almost didn’t get back in time. My best fish on Day 2 was a 15.25” I fished with Cody, and he said there were big ones there. I figured that if I didn’t catch one we could still win…..”

Cody: “My best on day 2 was around 19” It was a Smallmouth. A smaller one, about 12”, grabbed my Senko. I opened the bail and let it swim and spit it, because I saw the bigger one behind it. Sometimes, they would do that, and it happened a few times that a big one followed a small fish. Some spooked, but I also landed some. That big one ate the Senko after the small one did.”

Rus: “Jeff from Torqeedo was filming me on Day 2. He helped me keep a level head when my day didn’t start well. I didn’t find fish where we started so I ran down river. I flipped a jig and a big Smallie got away. Jeff said it was a good sign. Five minutes later, an even bigger Smallie did the same thing, and got tangled in some wood.  I was fishing with 17 lb Seaguar line, and that big Smallie didn’t break it, so I was able to go over and untangle it by sticking my arm in the water. “

“Winning the Top Team Cup was different. Stormy [Craig Storms] did so much for us, taking care of lodging and all, that my motivation was to make him happy. We gave him the trophy, and he hugged us all when it was over.”

The 2022 YakAttack Kayak Bass Fishing National Championship Powered by Dakota Lithium was made possible by support from the Paris-Henry County Chamber of Commerce at ExperienceParis.

About the Top Team Cup

The basic format is that a sponsor/company assembles a team (or teams) of four anglers to field. Those anglers each contribute their best fish to the leaderboard each day over the course of the two-day event.  The two days are concurrent with the first two days of the Yak Attack KBF National Championship.

Teams have four anglers each, so the team with the eight longest fish (two per angler, one per each angler each day) wins the Top Team Cup.