Day 1 of the 2021 YakAttack KBF National Championship presented by Torqeedo was feast for some, famine for others. The fish were eating, if you found them. Afterward, anglers talked about common strategies like picking apart cypress tree patterns, and also unexpected sources for big bites, like bluegill beds. In all, Day 1 set the table for the second course on Day 2: making the cut line for Day 3, when only the top 100 would compete.

At the end of Day 1, 4 anglers had posted limits of over 100 inches, and several others were right behind them in the upper 90’s. Several anglers made huge strides, and others held steady.

One who held steady was Guillermo Gonzalez. He added 100.25” to his huge Day 1 bag, to move from 2nd  place into 1st overall. Day 1 leader Joe Lanzillotti fell of his scorching day 1 pace, following up his 104.25” on Day 1 with 88.25” on Day 2. While Guillermo remained consistent, several other anglers improved position. Among them were:

Cory Dreyer, who has a reputation for making positive Day 2 adjustments at big events, made one of the biggest day 2 upgrades, adding 100.75” to his day 1 limit of 87.75, to move into 11th place overall at the end of the day.

But the biggest leap belonged to Brandon Bissell. A back-to-back KBF TRAIL winner this season, Bissell posted a whopping 105.75” limit on Day 2, a major upgrade over his 92.25” on Day 1. His dramatic surge moved him to within 6” of the overall lead.

On Thursday night, KBF competitors enjoyed music, food and drinks at The Lot in downtown Shreveport. They applauded Chad Hoover’s announcement of the top 100, and discussed how or why they did or didn’t make the cut. It was an evening of celebration and anticipation. Who won the Trail Series Championship? Who was the Top Team? Who was the Challenge Series Champion who would qualify for DEE ZEE KBF The Ten? As competitors received their custom Ketch boards, their custom Day 3 ID cards and stickers, the table was set for the main course on Friday, when all the questions would be answered. 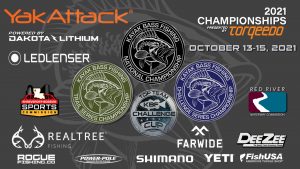