The 2022 KBF Sportsman of the Year: Jeff Little

Kayak Bass Fishing [KBF] established the Sportsman of the Year award to affirm the positive impact that individuals have in the kayak fishing community. The criteria were kept flexible so that KBF might recognize a broad range of contributions to the sport. When choosing the 2022 Sportsman of the Year, those criteria ended up coming full circle.

According to Chad Hoover, the selection process for the 2022 Sportsman of the Year award kept coming around to one question. Hoover says:

“We kept asking ‘who out there is doing something like what Jeff Little does?” What we meant was that we were looking for someone who promotes our sport at the highest level. In Jeff’s case it wasn’t just his work for Torqeedo but also his angler-based video content. In the end, we realized that instead of looking for someone like Jeff, we were really just looking for Jeff. It was then that we decided to recognize Jeff for the range of his work as an ambassador of the sport of kayak fishing.”

The range of that work reaches far beyond purely technical matters. Those are important too, of course. Jeff Little is best known for his work with Torqeedo and other industry brands. Sit with Jeff to discuss the finer points of electric motors, and you will learn more than you ever thought possible about the topic. His passion is contagious and his knowledge runs deep. It spills over into other areas as well, and that’s where the word “range” begins to capture not only the breadth of his work but also the esteem in which he is held by anglers in the community.

Attend a big kayak fishing tournament, and you will find Jeff Little discussing gear with anglers. You will find him on the water, filming people as they fish to create instructional videos. Product testing? Check. Awards presentations? Check. Writing articles for major kayak fishing publications? Check. Just out fishing for fun because he loves the sport? Check plus. 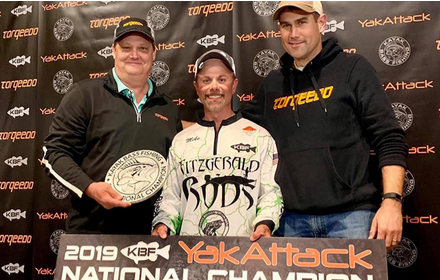 Did we mention that he is an ACA certified safety instructor? A kayak fishing guide with decades of experience?

In short, Jeff Little is a kayak angler’s angler. Cashion Rods pro Cory Dreyer holds Little in high esteem as both an angler and an ambassador of the sport. Dreyer told KBF: “Jeff is one of the most detailed and thorough anglers in the sport of kayak fishing. His attention to detail is second to none, and he is also one of the best river anglers in the country.”

That’s where it all started for Jeff Little, on the upper reaches of the Potomac River. As he tells it:

“I started fishing out of a kayak in 1998. I was involved in a Smallmouth Bass fishing club there, and I was the only oddball fishing from a kayak. I embraced the whitewater community for what I could learn from them, and apply it to fishing. I taught those skills to river anglers up and down the mid-Atlantic river like the Potomac, Susquehanna, Juniata, Rappahannock, and more. I converted many of those anglers to kayaks that way. Fishing was always better from a kayak on rivers, and the fun of it was the exploration.”

Having established himself as an angler, instructor and guide, Little moved into media, recording DVD’s and later still, establishing his prolific fishing channel. Check out the playlists there, and you will recognize many of the top anglers in our sport. They work with Jeff freely because they trust him to be useful and to present them well (for example, 2022 KBF National Champion Rus Snyders mentioned Little’s steady influence while Little filmed him during that event last month).

“I have the privilege of telling people’s stories. There’s a lot of joy and learning in being the first audience to that story, and absorbing that knowledge first hand. I am fortunate that people allow me to be on the water with them.”

We would also add that we are fortunate to have him with us, and that’s why Jeff Little is the 2022 KBF Sportsman of the Year.

About the Kayak Bass Fishing Sportsman of the Year Award

Kayak Bass Fishing established the Sportsman of the Year to recognize and encourage individuals who represent the sport of kayak fishing in the best possible light. Chad Hoover describes the award’s history as follows:

“When Jim Dolan [of Heroes on the Water] passed, I realized we weren’t acknowledging some of the ways that people impacted our sport. The award put a focus on something other than competition. For example, Cory [Dreyer] won when he saved that girl’s life, and Barry Davis won it for promoting unity among the anglers in his region and for his role in handling a cheating scandal. They were individuals who embodied what we were looking for in ambassadors who made a positive impact on our sport.”

To date, recipients of the Kayak Bass Fishing Sportsman of the Year Award have been: