Persistence. It’s a drive to win, and it burns in all tournament anglers. For some, victory takes years of competition. It includes near misses, close calls and heartbreak. The fire either dims or burns stronger. North Carolina pro kayak angler Cory Dreyer kept that fire lit and poured fuel on it with every near victory (including two 2nd place finishes this season alone).

Dreyer’s accomplishments are many, and some are the stuff of legend in our sport. Between 2015-2018, Dreyer placed in the money at every single KBF meet-up tournament he fished, a streak that extended over more than ten events. Along the way, he was co-champion of The Ten and he earned 5th place at the 2017 KBF National Championship. Additionally, he has never failed to win a check at the KBF National Championship. A consistent threat, one goal had however eluded him: an overall 1st  place win.

That win finally came this past weekend on September 20th at the KBF SuperTrail event at Lake Lanier, sponsored by RealTree Fishing and presented by Dee Zee Truck Manufacturing. 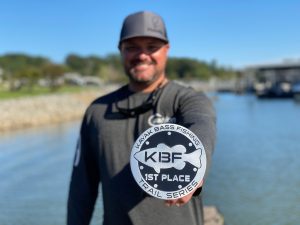 Dreyer finished in 5th place overall in the Saturday event won by Josh Bolz, but Dreyer made adjustments on Sunday that won him Day 2. On that day, he landed a 20” Largemouth Bass in the final minutes of competition, and sealed the victory with seconds to spare. Cory Dreyer explained his winning strategies and baits after the event:

“It was my first time fishing Lanier but pre-fishing was limited by remnants of Hurricane Sally and rising water. I decided to fish the river. The water was muddy but there were visible structures like laydowns and willow trees where I caught fish. On day 1, I motored with my Torqeedo down to the lake and caught Spots in clear water and around rocks. But I spent more time in the river on Sunday when I won, because that’s where the bigger Largemouth bass were located,” Dreyer said.

The techniques and tackle he used depended on conditions. Where Saturday was overcast, clearing skies on Sunday determined a different approach. “My primary techniques depended on two specific rods. I used the new Cashion Icon worm & jig rod. The main bait was a Z-Man Mag FattyZ, in black and blue laminate. It’s a magnum size, floating lure. I also rigged it on a Z-Man Pro Bulletz jig head. It’s like a Texas rig, and that was my technique and gear for Largemouth Bass. For the Spotted Bass I targeted Saturday, I used a Cashion Icon medium-heavy spinning rod rigged with Z-Man green pumpkin Floaterz on a shaky head.”

“I adjusted on Sunday to target the bigger Largemouth bass in the River. The bite changed because the sky cleared; I caught roaming fish in open water on Saturday, but Sunday’s fish were holding tight to cover,” added Dreyer.

Focusing on river structure ultimately sealed victory for Dreyer, but barely so. In addition to taking the photos of the winning 20″  fish during the last minute of competition, the final catch received a 1” open mouth penalty. Even with the penalty, Dreyer’s 5 fish bag held the top spot, and the overall victory that eluded him by so little a margin on previous attempts was finally his by a similar margin.

Rather than quench his competitive fire, his recent success has fueled it. Explaining his goals for the remainder of the 2020 season, Dreyer said “After two solid Trail events, I plan to keep the momentum going and finish strong at [KBF] Nationals and to make the KBF TEN event.”

About the Author: Henry Veggian is Regional Coordinator for the KBF Mid-Atlantic Trail. A multi-species freshwater kayak angler, he is a member of the Carolina Kayak Anglers directors group, the Ketch products fishing team and the Jackson Kayaks Fishing Team. He is a frequent contributor to the KBF Blog, and his writings on fishing have been published in numerous magazines. Follow him on Twitter @miacalva and visit his website at www.bowfincountry.com