The View from the Water – Kissimmee Chain 2022

[Editor’s note: Jim Ware is a veteran KBF angler from Georgia.His impressive kayak fishing resumé includes a KBF Super Trail Victory at lake Wheeler (2020) and a 2nd place finish in the Hobie B.O.S.. In this exclusive article, Jim discusses his approach to the Kissimmee Chain during KBF events held there in January of 2022, and what makes tournament travel special for him].

In late January, KBF kicked off its annual Dee Zee Tenvitational and The Ten tournaments on the Kissimmee Chain of Lakes in sunny Florida.

Florida in January??? You can definitely count me in so, I eagerly signed up and commenced to do as much preparation as I could from over five hundred miles away. I stocked up on black Senkos with blue tips, I had my Picasso Shock blades, rods rigged for flipping and punching, most of my reels loaded with fresh forty to sixty five pound Power Pro braid. I watched every relevant YouTube video and read fishing reports and articles until my eyes hurt. There was nothing else I could do until I finally could launch my kayak into the Kissimmee chain. 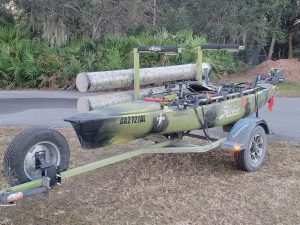 Lake Toho is well known throughout the world as one of the best trophy bass lakes on the planet…the southeast portion of Big Lake Toho would be my starting point if the good Lord was willing (Spoiler alert: he wasn’t).

After the important stuff was taken care of I had to make sure I had a place to sleep…I’m not picky on where I sleep…as long as it’s level and legal, I’m usually satisfied. I was told a group of my friends were camping at a local wildlife management area’s campground which happened to be a no fee area which is right up my alley. This area had no running water or power but several of the guys had portable generators and generously allowed me to charge my batteries when needed. The night I arrived I was told that Lake Toho was hosting a Lew’s Big Bass tournament. Knowing the number of bass boats that are affiliated with those types of tournaments I completely scrapped my initial plans and started from scratch… I’d now try the northwest section of Lake Kissimmee.

My first day of practice went fairly well. I caught numerous keeper sized fish with my biggest being over twenty inches long. All of my fish were caught on a light Texas rigged black Berkley Mag Hit worm with a pegged 3/16 ounce Picasso tungsten flipping weight. I fished that setup on the outside edges of the abundant Kissimmee grass and bull rushes. That area of Lake Kissimmee became my A1 spot but I still had three days of practice and a lot can change in that amount of time and it did.

My plans came to a screeching halt again…thirty mile per hour winds from the northwest were forecasted for Saturday morning and my little area on Kissimmee would receive those winds without any resistance. It doesn’t take much kayak fishing experience to know that winds like that doesn’t bode well with kayak fishing.

The Lew’s Big Bass tournament was canceled due to the wind advisory but we were still on so on tournament morning, I decided to fish Big Toho marina because it’s somewhat sheltered from the wind and the fact that numerous tournaments are based out of it, so an enormous amount of fish are released at the marina after their weigh-ins. The morning started slow and my only fish of the day came from punching hyacinth mats…a whopping thirteen and a half inches.

I decided to fish the area on Toho that I had originally planned to fish prior to the tournament. Toho has massive amounts of hydrilla and the south end of the lake is blanketed with the aquatic vegetation.  Since I hadn’t practiced in this area I was on a keen lookout for anything different with the lake bottom.  As I ventured further offshore I noticed some pepper grass patches and then found several deeper areas where the hydrilla hadn’t grown to the surface.  On my first cast with an Owner flashy swimmer paired with a Gambler EZ Swimmer I got bit. I slowed down and really picked the area apart, which resulted in three fish being landed and several lost fish. My total length for the day was definitely nothing to brag about but on a positive note, I found fish in offshore hydrilla, something I tend to struggle with on grass lakes. 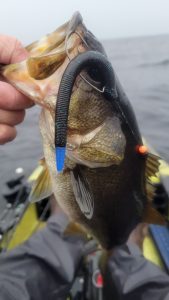 I finished thirty fourth in the KBF Pro series and forty second in the Tenvitational…not at all what I had planned on but, I’ve been doing this stuff since 2014 and if you’re doing these tournaments for a source of income it’s probably going to make for a short career.  Although I’ve never paid a tournament entry fee that I didn’t have some preliminary confidence that I could win, I know too that I’m not the only factor in how a tournament will play out for me. Weather is a major factor and the fact that you’re going up against an animal that is highly predictable but also extremely unpredictable at the same time tends to complicate matters sometimes.  A person can take a tournament finish like I had in two very different ways.

The first, being frustrated and just write it off that the weather had the bite messed up and the end result was out of your hands.  That reason very well could’ve been why but there is definitely something that you can do about it. Fishing is a never-ending learning process…the best fishermen in the world got to be the best by observing lots of different things, that includes other anglers.

People caught plenty of fish and there were some extremely impressive 5 fish limits during my time at Kissimmee. Those anglers faced the exact conditions I did, some fished the same areas I had fished and probably had the same lures tied on. I’m going to learn from them. I’m not saying to fish their spots but I shied away from the wind on day 1…some of the top anglers battled that wind and it paid off.

Additionally, a lot of anglers were on top of the incoming weather. Their preliminary plan placed them in areas that wouldn’t be as affected by the weather and that allowed them to get a better understanding of what the fish were doing and the real possibility that those fish would still be doing close to the same thing when tournament morning rolled around. Those two bits of information will garner a lot of thought in my future tournament planning.

I’ve established that the on the water education I received will be extremely valuable down the road but there’s another aspect I yearn for when traveling to these national level kayak tournaments.

I’ve made lots of friends over the years through this sport and I refer to our community as a “Band of Gypsies”. There’s people from all walks of life…Newbies, OG kayakers, young and old…friends that are musicians, doctors, artist, business owners, teachers, blue collar folks and lots of veterans . It continues to amaze me at how much this sport is growing and that brings new faces to meet. This trip was no different, though I received hugs and handshakes from old friends I also met some new faces that I’m sure I’ll see at future events. A real-estate broker from Orlando, Gaetano Criscuoli a.k.a. “G” and a fellow veteran I shared water with in practice from Wisconsin named Drew Stuntz are just a couple of interesting individuals I met.

Anyone who knows me will tell you that when I go on a trip, I’m going to find some great local cuisine.  Eating great food probably runs a close 2nd place to fishing in my book. I ate at several outstanding restaurants The Catfish Place, AL’S pizzeria and Crocante Rotisserie in Kissimmee/St. Cloud were tops ..I had great pizza, roasted pork, fried turtle and a delicious local Florida dish called “swamp cabbage” which is the heart of a type of sabal palm that grows in Florida’s swamps. With todays technology discovering places like that are at your fingertips.

Last, the main reason I believe we all do this sport, whether it be competitive or not is the beauty and serenity you see and feel while on the water. Florida has no ration on natural beauty.  There’s no telling how many different species of birds and animals I ran across plus, the Kissimmee chain are all natural  lakes that have areas that seem untouched by humans….true wild places.

While we all want to win, it’d be wise to have plans to meet new faces, indulge in the local food and culture and soak in God’s natural beauty because in my mind, it’s not a loss if I come home with a great story and a lesson for the future.