The View from the Water: Josh Bolz on Lake Lanier KBF Trail

The View from the Water: Josh Bolz on Lake Lanier

On the 1st Place Finish

I began fishing KBF tournaments about three years ago and never made 1st place. I have come very close in the past, but only managed to get 2nd, 3rd, 5th or just outside the top ten. I always wanted to know what it was like to come in first place and be able to bring the trophy home. Well, that long wait finally came to an end at Lanier as I still cannot believe I won first place Saturday, and almost again on Sunday.

In the Sunday tournament I took first place with 3 minutes left, but then big bad Cory Dreyer landed a monster bass in the last minute of the tournament to drop me to second. I’m good with second if I’m behind one of the biggest hammers in the sport. Not only have I always wanted to take first place in a KBF event, but also wanted to receive a ticket to the KBF National Championship and did so.

How Josh Did It

I was only able to pre-fish for this tournament two days the week before but for only 3 hours each day. This meant during pre-fishing I was able to utilize my Anglr app to mark my brush so when tournament day came I was able to find the marked brush easily even if conditions were rough. On tournament morning I was still undecided where I was going to put in and really did not have a pattern developed due to the limited pre-fishing. On my way to the lake Saturday morning I just decided to go to a ramp that I have had luck at in the past to see if I could develop something to at least wipe the skunk off and get something on the leader board.

I arrived at the lake it was already white capping due to the high winds. Everyone knows kayak fishing in high winds is somewhat of a struggle, so confidence was at an all-time low for me at this point. I started off throwing a top water plug on bluff walls in the morning to try and get a top water bite, but I was unsuccessful.

After the first hour I decide to go back to what I know and that is fishing finesse around blow downs and submerged brush piles. The first blow down I came too I threw a ¼ ounce shaky head pared up with a Z-Man 6” green pumpkin tick worm directly into the brush and landed an 18+” fish on the first cast. Once I submitted the first fish, I threw the same setup into the exact same spot and set the hook into another 18+” fish. After submitting the second 18+” fish I quickly motored while paddling with my Bending Branches paddle due to the conditions to the next blow down I could find.

The shaky head was just getting the big bites I needed to keep me at the top of the leader board, so I decided to switch it up just a little bit. I then grabbed my green pumpkin ½ ounce Z-Man jackhammer pared up with a strike king green pumpkin rage craw and started to cast as close as I could to the clay bank right next to the blow down. As soon as the Z-man jackhammer would hit the water I would get a bite and set the hook. It was insane, I wouldn’t even get 3 cranks in before the bass would smack it. After catching numerous fish off the shaky head and the jack hammer I knew that was going to be the pattern I would not only use for the remaining day on Saturday to take home first place but I would also use that same pattern and location for the tournament on Sunday.

Waking up Sunday morning was rough, since the conditions were so rough for me on Saturday that the physical and mental fatigue was fully set in. I once again did not have a plan of action for Sunday because I was not able to pre-fish a lot for either tournament. I decided to take a gamble and go to the same boat ramp and hope my pattern from Saturday would still be working. I not only used the same exact baits as I did Saturday, but I fished the exact same blow downs, clay banks and brush piles. The bites were slower but they were big. At around 10am I casted to a bright red clay bank near four blow downs and set the hook on a 20.25” fish that would cash the check for big fish on Sunday. That 20+ inch fish would also set me up to be in the top three so I could make my run for the 1st place position. At 2:57pm I caught a 16” fish to finally put me in the lead for Sunday with 3 minutes to spare, but little did I know at 2:59.57 Cory Dryer photographed the 20” fish to bump me out of the 1st place spot and lock me in the 2nd place spot. 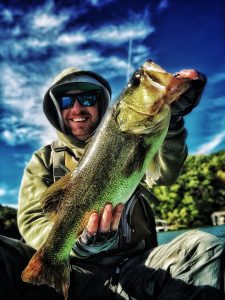 [Josh Bolz and the 20.25″ bass he caught on Lanier. Photo courtesy of Josh Bolz]

When it was all said and done, I finally accomplished goals that I have been working so hard to accomplish over the past 3 years. Most importantly, this weekend’s accomplishment could not have been possible without my Lord and Savior Jesus Christ keeping me and all the anglers safe during the rough condition we all faced. Thank you to all the companies I support and believe in because their products helped pave the way for my success. The NuCanoe Pursuit handled the brutal winds and big water without missing a beat. It maintained stability and tracking while it was rolling over the white caps. Rigging on the NuCanoe Pursuit was a crucial factor for success this weekend. Yak Gear and Railblaza came in clutch big time this weekend by providing the right accessories to maintain my gear during the rough conditions.

I am not stopping by any means. Winning Saturday and coming so close Sunday has fueled me to keep my momentum going by competing in the rest of the events for 2020, the KBF Tenventional in January 2021 and the 2021 KBF National Championship.